Amir Khan to Marcos Maidana: “Let’s do it again” 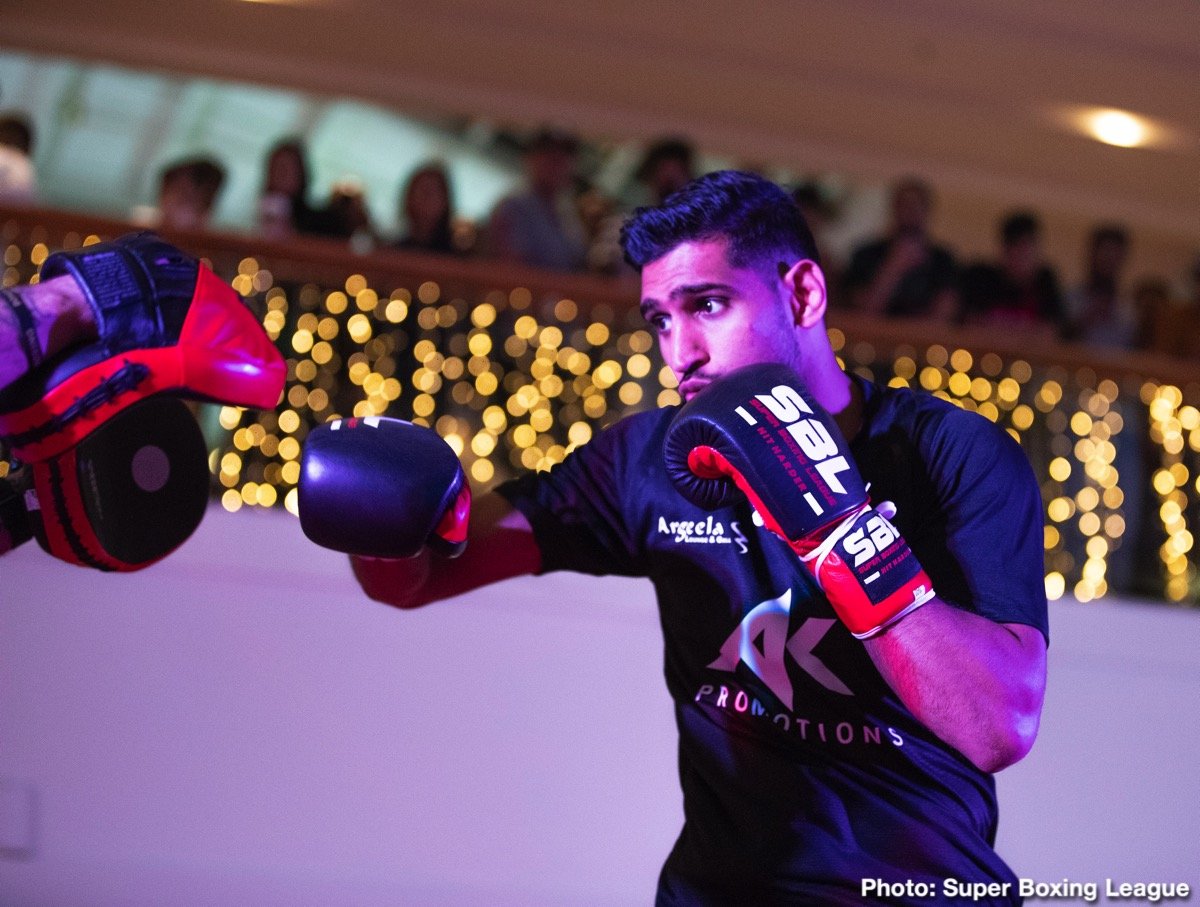 By Charles Brun: Amir Khan welcomes a rematch with former two-division world champion Marcos Maidana if he comes out of his six-year retirement to resume his career. The 36-year-old Maidana (35-5, 31 KOs) is training for an exhibition match against a 47-yearArgenitinan kickboxer.

If Maidana looks good at beating the guy, which will take place in a boxing ring, then he could restart his career.

Khan and Maidana spoke this week during a  conference call for the 99th WBA Convention. During the call, the 33-year-old Khan (34-5, 21 KOs) expressed interest in facing Maidana, who he beat ten years ago by a 10 round unanimous decision in December 2010. Khan knocked Maidana down with a body shot in round one. The fight took place in the 140-pound division.

Maidana had a point deducted for throwing an elbow when the referee Joe Cortez attempted to pull him off of Khan. It was a strange fight to watch, given the number of times that referee Cortez got in between Maidana when he was attempting to knock Khan out.

Cortez wasn’t letting Maidana work on the inside, and by doing that, he may have saved Khan from being knocked out. Khan had the reach and mobility. So when the action was on the outside, it favored him.

“Tell Maidana, let’s do it. Let’s do another fight. Come on, let’s do it again,” said Khan on a conference call for the 99th WBA Convention this week.

There would be a tremendous amount of interest from boxing fans in a Khan vs. Maidana rematch. The same applies to a Maidana vs. Adrien Broner II clash. However, Khan likely isn’t serious about wanting to face Maidana again. The guy that Khan wants is 41-year-old Manny Pacquiao, who he’s been chasing for the last ten years with no luck. It’s highly unlikely Pacquiao will agree to fight Khan in 2020 or 2021.

The fighters with a good chance of facing Pacquiao are Mikey Garcia, Errol Spence Jr, Danny Garcia, Terence Crawford, and Keith Thurman. Khan may have blown his chance for a fight with Pacquiao by losing to Terence Crawford and Canelo Alvarez.

Amir quit in the sixth round against Crawford after being hit with a low blow. Instead of using the full five minutes to recover from the low blow, Khan’s trainer Vergil Hunter pulled him out of the fight. It looks like Khan wasn’t motivated to continue, as the match was starting to get out of hand at that point.

Amir’s own career appears to be all but done at this point. Although Khan isn’t old at 33, he’s been a part-time fighter for the last seven years since 2013. Khan stopped fighting twice a year from 2013 and mostly competes once a year. But he also skips years. Khan didn’t fight in 2017, and it’s looking like he won’t fight at all in 2020.

If Khan were smart, he’d realize that he doesn’t have a lot of options for winnable fights, and he would take the Maidana rematch. Khan should also seriously consider facing Kell Brook now while there’s still a slight amount of interest from British fans in that match.

“I got a lot of respect for him in whatever he does in life,” said Khan on Maidana. “I wish him all the best,” said Khan when told that Maidana might be returning to the ring for an exhibition match. He punched hard.

“Every punch he hit me with hurt me. He was so physically strong. He would not take a step back.

“I remember when I hit him with a body shot. Anybody else less would have stayed down. He got back up. I was like, ‘Oh my God, how has he got back up?'” said Khan.

The Khan vs. Brook match is already past the sell-by date, but it would make money for both guys if they promoted it right.

Maidana had a lot of trouble with the referee positioning himself in between him and Khan during critical moments in the match. In looking back at that fight, Maidana appeared to be fighting two people on the night.

Cortez inserted himself into the contest at a critical point in round 10 Khan after he got hurt by Maidana in the tenth by pulling the Argentinan fighter off him repeatedly when he was trying to finish the job. Khan ended up winning by the scores 114-111, 114-111 and 113-112.