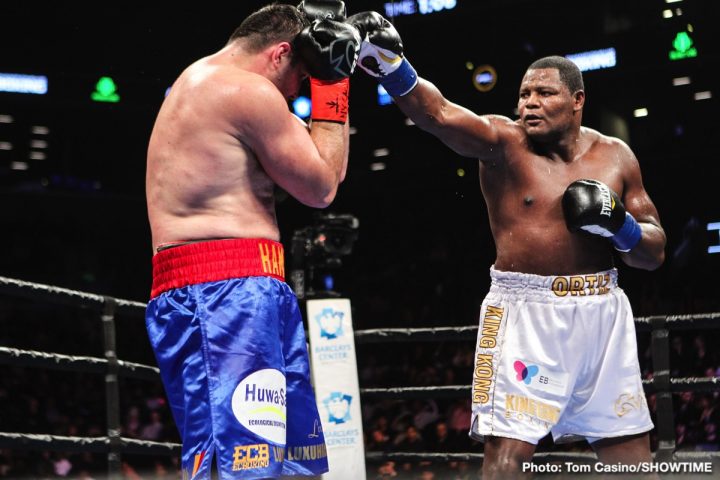 By Charles Brun: Luis Ortiz’s manager Jay Jimenez says it’s their fault that the fight with heavyweight champion Anthony Joshua isn’t happening next on June 1st. Speaking to Thaboxingvoice, Jimenez says that he and Ortiz (31-1, 26 KOs) wanted to take the fight for the $5 million that offered to challenge IBF/WBA/WBO champion Joshua (22-0, 21 KOs) on June 1 at Madison Square Garden, but it was Ortiz’s promoter that wanted to get more than what was offered. Jimenez says they “dropped the ball,” believing they could get more.

Jimenez says he was told that the promoter would match what Ortiz was offered by Joshua’s promoter at Matchroom Boxing. Ortiz still wanted the fight with Joshua, but he’s not getting it now. Joshua’s promoter Eddie Hearn has moved on, and is looking to possibly put together a fight with one of these three heavyweights: Andy Ruiz Jr., Michael Hunter or Trevor Bryan. For Ortiz to get the same $5 million that he would have received for the Joshua fight on DAZN and Sky Box Office PPV, he would need to face World Boxing Council heavyweight champion Deontay Wilder in a rematch. Ortiz made $500,000 last year in an unsuccessful title challenge against Wilder on March 3, 2018.

Wilder stopped Ortiz in the 10th round of a competitive match-up at the Barclays Center in Brooklyn, New York. Given that Ortiz made $500K for the Wilder fight a year ago, it’s hard to imagine that he’ll make an additional $4.5 million on top of that for a rematch. The southpaw Ortiz could have made a lot of money for the Joshua fight, and who knows how much more from the pay-per-view percentages from Sky Box Office in the UK. You don’t want to call it a blow it move on Ortiz’s management’s part for not agreeing to the $5 million for the Joshua fight, but it looks it is a blunder on their part in not agreeing to the deal. Joshua’s originally scheduled opponent Jarrell “Big Baby” Miller was supposed to get $4.875 million for the fight. If Ortiz was going to get roughly the same amount, that would have been a great deal for him you would think.

Joshua isn’t better off though by not fighting Ortiz. If Hearn signs Trevor Bryan, Michael Hunter or Andy Ruiz Jr. as Joshua’s opponent for his June 1, it’s not going to be a fight that will interest the U.S boxing public. Ruiz Jr., Bryan and Hunter aren’t household names with the casual boxing fans. The hardcore fans are familiar with these guys, and they’re not super excited about Joshua fighting any of them. Those are guys that haven’t proven themselves as pros.

It’s not too late for Hearn to pick up the phone and try and put together the Ortiz fight unless he’s completely sold on wanting to match Joshua against Hunter, Ruiz Jr. or Bryan. Further, Ortiz can always tell his promoter that he absolutely wants the Joshua fight. Obviously, he needs to do that right now for him to have a chance of getting the Joshua fight.

Ruiz Jr. or Bryan to face Joshua on June 1 »