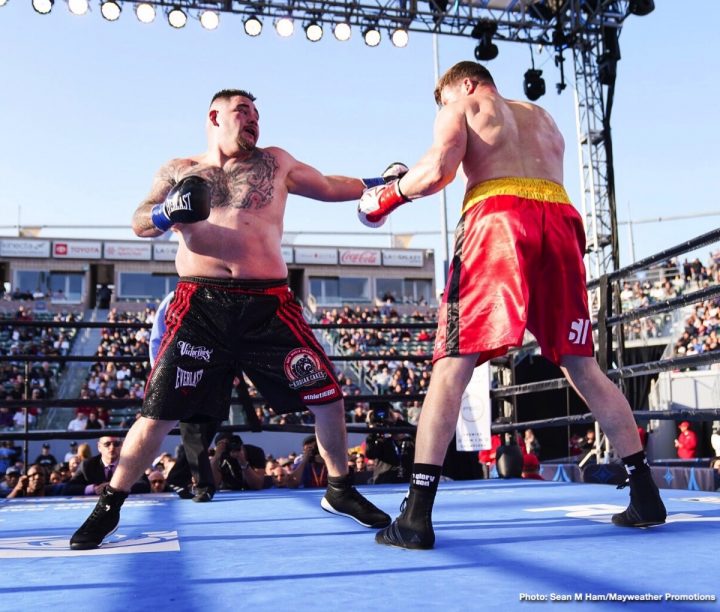 By Trevor McIntyre: Andy Ruiz Jr. (32-1, 21 KOs) has a high possibility of being selected as the next opponent for IBF/WBA/WBO heavyweight champion Anthony Joshua (22-0, 21 KOs) on June 1 at Madison Square Garden in New York. Joshua’s promoter Eddie Hearn said on Thursday at that Ruiz Jr., 29, and Michael Hunter (16-1, 11 KOs) are two fighters that he’s closely looking at as the replacement opponent or Joshua to fight next on June 1.

Joshua’s original opponent Jarrell “Big Baby” Miller came up positive on three separate testing dates for banned substances, and he’s no longer scheduled to face AJ. With a bad experience with Miller, Hearn wants to make sure that he picks a solid opponent as Joshua’s replacement so that he doesn’t have additional fighters being removed.

“I think Anthony Joshua is next,” Ruiz said to Fox Sport. “We’re in negotiations right now and hopefully they pick me. I have had a phone call (with Eddie Hearn). They’re talking to my team, but I don’t want to get ahead of myself.”

Hearn repeatedly compared Ruiz Jr. to Jarrell Miller on Wednesday, seeing them both as the same type of fighter.

Ruiz Jr. is with Premier Boxing Champions, so Hearn will need to work with them in getting him to step in as the replacement. Ruiz Jr. fights on PBC cards normally. Whether a fight between him and Joshua would be shown on both DAZN and PBC is unclear. It’s probably not a great deal for DAZN if the audience for the Joshua vs. Ruiz fight is split between their streaming platform and PBC on Showtime or Fox. Instead of a massive amount of boxing fans subscribing to DAZN to see the Joshua-Ruiz fight, there would likely be fewer. However, Joshua needs a good opponent for his debut in the U.S to attract interest to his fight on DAZN.

If Hearn signs a heavyweight that the American boxing fans have never heard of or don’t care to see, then that will hurt the amount of subscribers that DAZN can pull in for Joshua’s debut in the United States. In addition to Ruiz Jr. and Michael Hunter as possible options for Joshua’s June 1 fight, Hearn has mentioned Agit Kabayel, Trevor Bryan, and Manuel Charr. For one of those guys to get the fight against Joshua, Hearn will have to have failed at signing Ruiz Jr. or Hunter for the job. Hearn seems to like the idea of Hunter getting the fight. He signed the 2012 U.S Olympian recently to his Matchroom Boxing USA stable, and he thinks an amazing talent. Hunter lost to Oleksandr Usyk two years ago by a 12 round unanimous decision in a more competitive than expected contest. Hunter gave Usyk one of the toughest fights of his short pro career.

The big question is would the U.S boxing public be interested in seeing Joshua fight Ruiz Jr. or Hunter? Ruiz Jr. is from Southern California, and he hasn’t done much with his career since his loss to Joseph Parker in December 2016 in a fight for the vacant WBO heavyweight title. Ruiz Jr. has since beaten Devin Vargas, Kevin Johnson and Alexander Dimitrenko. Those are journeymen level opposition. Hearn doesn’t have a lot of great options for Joshua to fight unfortunately. The American fans don’t follow the heavyweight division that closely apart from Deontay Wilder, Luis Ortiz and Joshua. Tyson Fury has been out of the loop, and hasn’t been seen by U.S fans. Most of the guys that Hearn has been mentioning to be on his short list are fighters that the U.S public aren’t familiar with. If Hearn chooses someone like Bryan, Kabayel, Hunter or Charr, he’s going to have to promote the fight heavily to introduce that fighter to the U.S boxing fans. In other words, he would need to give the American fans a cram course on the opponent to make them want to watch Joshua fight that person.