Kell Brook vs. Jessie Vargas being planned for May or June 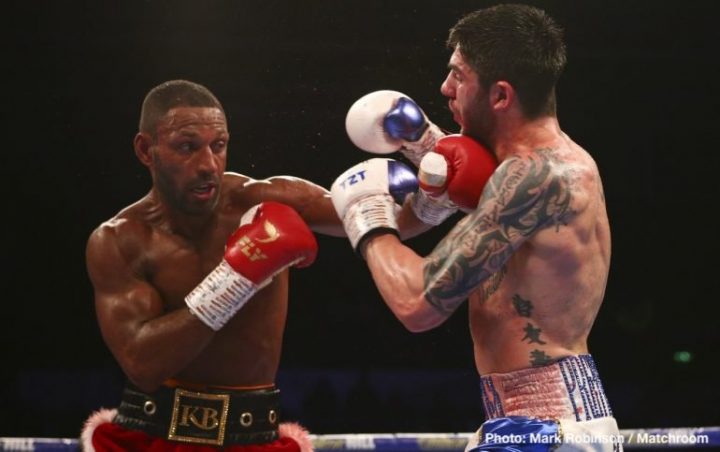 By Scott Gilfoid: In a questionable move on Matchroom promoter Eddie Hearn’s part, he’s working on a fight between former IBF welterweight champion Kell Brook (38-2, 26 KOs) and former two division world champion Jessie Vargas (28-2-2, 10 KOs) for May or June for a fight on DAZN in the West Coast of the U.S. This will be possibly a catch-weight fight in the 154 lb division.

Okay, so this is what we know about the Brook-Vargas fight:

A. It’s a horrible fight

B. No world titles will be on the line

C. It gives the impression that Brook is no longer serious about fighting quality opposition

D. The fight furthers the belief that Brook is just trying to keep winning long enough for his cash out fight against Amir Khan

E. Eddie Hearn had bragged last year that Brook is the best fighter at 154, and yet he’s not fighting for a world title despite being the mandatory challenger to WBA junior middleweight champion Jarrett Hurd

Brook was supposed to have been putting the junior middleweight division on notice when he moved up to the weight class last year, but his opposition has been woeful to say the least. Whether it’s Brook’s fault for his wily promoter Eddie Hearn’s fault in the mediocre opposition than he’s been fighting since he moved up to 154 is unclear. Suffice to say, Vargas isn’t the type of opponent that the fans wanted to see Kell fighting at this point in his second year at junior middleweight. Some boxing fans believe Brook has lost his nerve since suffering back to back broken eye sockets to Gennady Golovkin and Errol Spence Jr.

This move by Hearn won’t be a popular one with the British boxing fans, who would like to see Brook, 32, fighting at home in the UK rather than in the States against what is arguably a journeyman fighter in 29-year-old Vargas, who has won only two fights in the last four years of his career since 2015. Even during his best years, Vargas was always shaky, winning controversial decisions over Anton Novikov and Khabib Allakhverdiev in 2014. A lot of boxing fans thought Vargas deserved losses in both of those fights. Vargas vacated his World boxing Association World light welterweight title in 2015, and moved up in weight to challenge Timothy Bradley for the interim WBO welterweight belt in 2015, but he was soundly beaten by him by a one-sided 12 round unanimous decision.

Vargas did clip Bradley with a big right hand in the final 30 seconds of the contest, only to see referee Pat Russell mistakenly halt the fight 10 seconds early when he mistook the 10-second signal to be the end of the fight. Bradley was hurt at the time, and close to being knocked out. Vargas wanted a rematch with Bradley, but it never happened, even though it was talked about.

Vargas captured the vacant World Boxing Organization welterweight title in March of 2016 in stopping Sadam Ali in the ninth round. It was an impressive victory for Vargas, but it came against a flawed fighter at 147. Ali had never done anything to prove to the boxing world that he was one of the elite fighters in the 147 lb division. He was just a guy that the WBO allowed to fight for their vacant WBO welterweight title. Vargas arguably didn’t deserve to be fighting for the vacant WBO title either, given his loss in his previous fight to Bradley.

Vargas was very lucky that the WBO sanctioned his fight with Ali for their WBO welterweight title, because neither guy deserved to be fighting for a world title. After Vargas won the WBO strap, he immediately lost the title in his first defense against Manny Pacquiao in November 2016. It was obviously a good money fight for Vargas, who then sat out of the ring for 13 months before finally returning to action in beating journeyman Aaron Herrera by a 10 round unanimous decision in December 2017. It’s been downhill since then for Vargas with him fighting to consecutive 12 round draws against Adrien Broner and Thomas Dulorme in fights that he arguably should have lost. However, Eddie Hearn of Matchroom Boxing USA signed Vargas with the hopes of using his name to get him a world title shot. That’s not obviously not going to be easy for Hearn, considering Vargas’ lack of wins in the last four year.

Winning only 2 fights in the last 4 years makes it tough for the sanctioning bodies to give Vargas a high enough ranking for him to get a title shot. The best thing Hearn can hope for is if Vargas beats Brook, which is doubtful that Eddie would like to see happen at this point, would be for one of the welterweight champions (Shawn Porter, Terence Crawford, Errol Spence Jr., Manny Pacquiao or Keith Thurman) to give Jessie a voluntary title shot. That could actually happen, but only if he beats Brook. If Vargas loses to Brook, then it would incredibly bad if one of the 147 lb champions were to throw him a bone by giving him an undeserved world title shot.

A loss for Vargas against Brook would put his recent ring record to 2-3-2 in the last four years of his career since 2015. Gilfoid would venture to say that there aren’t too many contenders getting title shots with an abysmal record like that in their last seven fights. Of course, this is boxing, and you can always expect the promoters to do the opposite of what makes sense. In other words, winning doesn’t necessarily help a contender get a title shot in this day and age.

Sometimes losing and looking bad will do the trick, and Vargas has definitely been looking bad lately, which might be the sole reason why Hearn is lining him up with Brook. Hearn obviously doesn’t want Brook to lose the fight to Vargas or anyone at this point, because he’ got a big money match against Amir Khan that is likely to take place later this year. Khan was supposed to fight Brook in April, but Amir swerved the fight and accepted a good money offer from Top Rank to challenge WBO welterweight champion Terence Crawford on ESPN PPV on April 20 at Madison Square Garden in New York. Hearn already had Brook take two soft fights in a row against Sergey Rabchenko and Michael Zerafa, so the boxing public was demanding that he put him in with a real body. Hearn listened to them, and dug up Vargas, who at this point is on the slide and a slight step up from Zerafa, but not much. In truth, it wouldn’t be surprising if Zerafa, 26, beat Vargas.

Hearn is working on finalizing the Brook vs. Vargas fight for May or June, according to ESPN. The weight for the Brook-Vargas fight is still yet to be determined. It could be from 147 to 150. Brook currently fights at junior middleweight [154], but he’s only had two matches in that weight class since moving up from 147 in 2018.

Brook had said he was going to go up and beat the lions in the 154 lb division, but instead he’s taken the soft road in defeating fringe contenders Michael Zerafa and Sergey Rabchenko. Brook has been given title shot offers by the likes of Jermell Charlo and Jarrett Hurd, but he’s ignored them and focused on his low level fights against Zerafa and Rabchenko.

It was understandable that Hearn matched Brook against Rabchenko last March, since he needed a confidnence booster in the worst way after havng been stopped in consecutive fights by former IBF/IBO/WBA/WBC middleweight champion Gennady ‘GGG’ Golovkin and welterweight terror Errol Spence Jr., fights which resulted in Kell suffering broken eye sockets effecting different eyes. The boxing public didn’t begrudge Brook from taking a soft job in Rabchenko in his first fight back from his eleventh round knockout loss to Errol Spence in May 2017.


« Oleksander Usyk vs. Alexander Povetkin planned for May 18 in Chicago