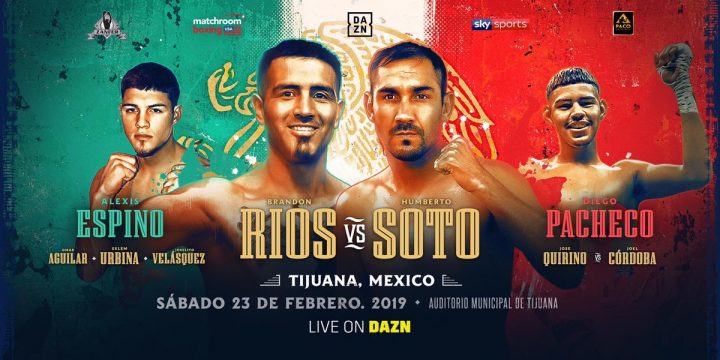 By Aragon Garcia: Former two time world champion Humberto “Zorrita” Soto (69-9-2, 37 KOs) had way too much talent for former WBA lightweight champion Brandon ‘Bam Bam’ Rios (35-5-1, 26 KOs) in beating him by a lopsided 12 round unanimous decision on Saturday night on DAZN at the Auditorio Municipal in Tijuana, Mexico. Soto took Rios to school tonight and gave him a boxing lesson that may just have finished his career.

Soto got off to a quick start in appearing to win the first five rounds, and he put Rios behind the eight ball with that fast start. Soto was nailed Rios with big uppercuts to the head and powerful body shots. Rios was staggered by heavy shots from Soto in the first three rounds. Rios was stunned by heavy shots at the ends of the round. Although tried to play like he wasn’t hurt by putting his arms out to his sides to give the appearance that the shots didn’t hurt him, the way he staggered told otherwise. Rios was hurt in each of the first 3 rounds.

This was a HUGE upset win for Soto, as he came into the fight a big 8:1 underdog against Rios. The odds-makers might not have been familiar with Soto, as this writer saw him as the clear favorite based on his much superior talent than Rios. Soto has always been a massive talent during his career. Rios was a guy that briefly held a world title in 2011, and then lost it when he couldn’t make weight.

Rios, 32, outworked the 38-year-old Soto in almost every round, but he was ineffective with his work rate in missing many of his shots. The “Crafty Little Fox” Soto was the smarter fighter with the way he stole the rounds in the last 10 to 15 seconds by throwing sustained combinations to the head of Rios.

Soto would come alive when the 10 second bell would sound, and he would attack Rios with speedy flurries with many of the shots snapping his head back repeatedly. Soto didn’t have the power on his shots that the bigger Rios did, but it didn’t matter. Soto’s crowd-pleasing combinations had the boxing on the edge of their seats giving shouting appreciation for the hard work he was doing.

Rios fought well in rounds 6 and 11. Those were the two rounds in which the exhausted looking Soto appeared to take a rest break. Those were still close rounds that were competitive, but you can say that Rios deserved at least one of those two rounds. This writer gave Rios the 11th. He landed a lot of heavy shots to the head of Soto in that round. Soto was resting for the final 12th, so he took the 11th round off. Rios kept coming forward and getting hit his shots, but he leaving himself open at all times to body shots and hooks to the head from Soto. When the two fighters would come into a clinch, Rios would stick head into the face of Soto to try and get him to let go of him. This tactic has worked for Rios his entire career, but tonight, the move was leading to him getting caught with huge uppercuts by Soto. Rios never learned to stop doing that move even though he was getting caught with vicious uppercuts repeatedly by Soto.

The pressure that Rios put on Soto was unrelenting. “Bam Bam’ Rios never stopped coming forward and throwing punches. He looked tireless the entire fight. Rios told his trainer Robert Garcia that he was tired after round 10, but he didn’t show it during the rounds. He just kept throwing shots. The problem that Rios had was he focusing too much on trying to hit Soto with head shots, and he couldn’t connect often enough with those punches due to the head and upper body movement from the “Crafty Little Fox.” Soto made sure that most of Rios’ shots missed, and that made it hard to give him rounds.

The win for Soto was a nice one, but he’s not a true welterweight. The tonight with Rios took place at welterweight, but Soto would be out-sized by welterweights like Errol Spence Jr., Keith Thurman, Shawn Porter and Terence Crawford. Manny Pacquiao would be good fight for Soto if he could get it, but he would need to ranked likely at #1 with the World Boxing Association for him to even have a chance of getting a match against the Filipino star. It’s not likely to happen. Pacquiao is finishing his career, and is looking to get the biggest money fights possible. That means someone like Spence or Thurma, but not likely a warrior like Soto.

Rios didn’t say much after the fight, but this defeat has to hurt him badly. Rios came into the fight saying that he wants to win a world title at welterweight. Now that he’s lost to the 38-year-old Soto, who has spent most of his career at lightweight, it leaves ‘Bam Bam’ with a big decision to make with his career. Does he continue to fight or does he hang up his gloves. This was the second fight for Rios of his three-contract with Matchroom Boxing USA DAZN. Even if Rios doesn’t retire after his contract with Matchroom, does the promotional re-sign him to another 3-fight contract or do they let him go? In Rios’ last fight, he stopped Saul Canelo Alvarez’s brother Ramon ‘Inocente’ Alvarez (27-7-3, 16 KOs) in the ninth round last November, but that was against a journeyman fighter that was never world class. Ramon is not talented like his brother Canelo. Going into tonight’s fight, there was some overconfidence on Rios and perhaps even Matchroom promoter Eddie Hearn’s part in thinking that he could beat an accomplished fighter like Soto.


« DeGale to contemplate retirement after loss to Eubank Jr.