Brandon Rios vs. Humberto Soto on Feb.23 on DAZN 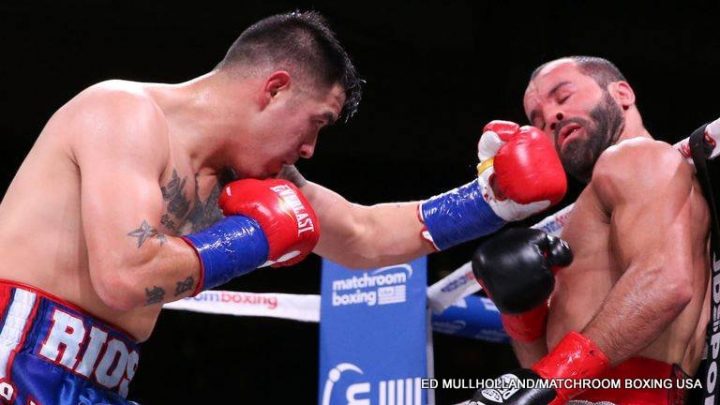 By Mike Smith: Former lightweight champion Brandon ‘Bam Bam’ Rios (35-4-1, 26 KOs) will be facing former two division world champion Humbeto Soto (68-9-2, 37 KOs) next month on February 23 on DAZN at a still to be determined venue in Tijuana, Mexico. This will be a fight at welterweight. Soto has spent most of his long 22-year pro career at featherweight.

Rios’ last fight was at 154. Rios, 32, is coming off of an impressive 9th round knockout win over journeyman Ramon ‘Inocente’ Alvarez (27-7-3, 16 KOs) last November. Alvarez is one of middleweight champion Saul Canelo Alvarez’s brothers. Rios had lost his previous fight to Danny Garcia by a ninth round knockout in February of 2018.

Rios-Soto is a toss-up fight, as Rios has looked awful in losses to Danny Garcia and Tim Bradley in the last four years of his career.

Rios is the younger guy in facing 38-year-old Soto, so there’s he’s definitely catching the talented Mexican star at the right time in his career for him to beat him. When Soto was at his best, he would have been a real handful for Rios.

Soto has won his last three fights since losing a controversial 10 round unanimous decision to Antonio Orozco (27-1, 17 KOs) in October 2015. That was a situation where Soto came up against a highly hyped but limited Golden Boy contender Orozco, and he found himself on the receiving end up a set of scores that didn’t resemble the fight that took place inside the ring. Soto appeared to win the fight by a seven rounds to three score, but Orozco was given the decision by the scores 97-92, 97-92 and 98-91. The fight took place in Carson, California. Boxing News 24 had Soto winning that fight by a 97-92 score. He looked like the much better fighter of the two against a very limited looking Orozco, who was way out of his class in that fight. Orozco lost his first fight of his career recently against WBC light welterweight champion Jose Carlos Ramirez by a one-sided 12 round unanimous decision last September. Soto arguably did a better job of beating Orozco than Ramirez did, but he wasn’t given the win. The last true loss for Soto was seven years ago when he was stopped in the fifth round by Lucas Matthyse in June 2012. There was nothing controversial about that loss for Soto. Matthysse was just too powerful for Soto.

Rios was signed by Matchroom Boxing because he’s someone that the casual and hardcore fans are familiar with. However, he’s not going anywhere at this point in his career. Rios had a good run with Top Rank as an opponent for guys like Tim Bradley, Mike Alvarado and Manny Pacquiao, but he hasn’t held a world title since 2011. Rios’ best wins of his career have come against Mike Alvarado, Miguel Acosta, Anthony Peterson, Diego Chaves [controversial disqualification victory], Richard Abril [controversial decision], Urbano Antillon, and John Murray. Rios’ last win over a world class fighter, that wasn’t over-the-hill, was his victory over Diego Chaves in 2014. That was a fight that Rios was in the process of losing when the referee suddenly jumped in and disqualified Chaves for throwing an elbow in the ninth round. There was only one round to go, and Rios was on his way to losing the fight. If not for the disqualification of Chaves, Rios likely would have lost.

There are a lot of boxing fans that think Rios is a shot fighter due to the way he talks. They think he slurs his words, and is showing signs of being punch drunk. He still seems to be fighting well though when matched against beatable guys. He looked good in his last fight, so there’s a chance he could beat Soto, who is nearing 40.