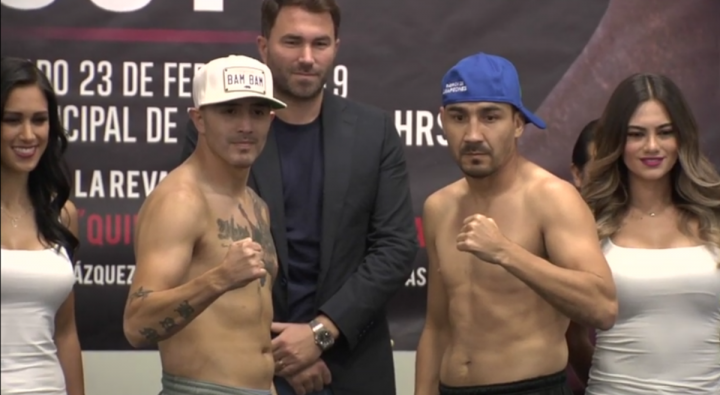 By Dan Ambrose: Former WBA lightweight champion Brandon ‘Bam Bam’ Rios weighed in at 151 3/4 pounds on Friday for his 10 round fight against former 2 division world champion Humberto Soto this Saturday night on DAZN at the Auditorio Municipal in Tijuana, Mexico.

The 38-year-old Soto (68-9-2, 37 KOs) weighed in at 146 1/4 lbs. You could tell from looking at Soto that he’s not going to rehydrate much overnight. But with Rios (35-4, 26 KOs), he looks like he’s going to put on at least 15 lbs if not 20 lbs overnight. He looked really thin. If Rios comes into the fight on Saturday at or or near 170 lbs, he could be sluggish, and vulnerable to Soto’s body shots. This could be a bad match-up for Rios if Soto targets his body the way that Tim Bradley did in stopping him. 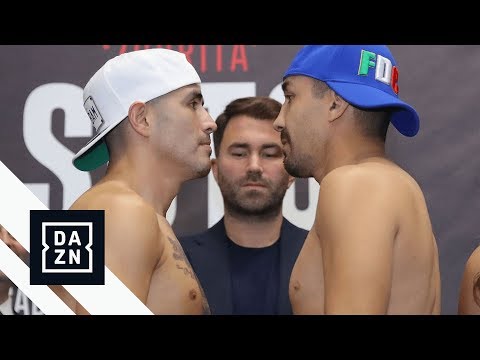 Matchroom Boxing USA promoter Eddie Hearn signed Rios to a three-fight contract with his company, and he wants to keep him busy. Rios has hope of Hearn getting him a title shot. Hearn is a miracle worker, but he might not be able to pull that kind of a miracle off. Rios has fallen off so badly over the years with his defeats against Pacquiao, Bradley, Mike Alvarado and Danny Garcia. Any of the 147 lb champions would be ridiculed by the boxing public if they chose to defend their titles against Rios at this point. If Rios is serious about wanting to fight for a world title, he’s going to have to put together wins over credible welterweight contenders, not old guys like Humberto Soto or journeyman level guys like Roman ‘Inocente’ Alvarez (27-7-3, 16 KOs).

“I’m very motivated and I know I can do it. I’ve never been this hungry to win a world title. I have faith I can make it happen,” Rios said to RingTV.com.

Hearn obviously chose Soto because he believes Rios can beat him. Don’t be surprised if Rios loses this fight. Soto is clearly a better fighter than Rios ever was as a professional. There’s no comparison. If Soto had fought his entire career in the U.S, spending much of it with Top Rank like Rios did, he likely would have been very popular in the States.

Being hungry is nice for Rios, but it still doesn’t mean anything. What Rios should do is back away from the dinner table, and lose some more weight to try and get back down to lightweight, which is where he once held the WBA 135 lb title. Rios’ punching power carried a lot father when he was fighting at lightweight than it has since he’s moved up to first 140 and later 147. Rios weighing in at 151 lbs on Friday makes you wonder whether he’s got the discipline to even make weight at 147. Rios should have Soto at 147. If an older fight like Soto can make 147, then Rios should have been able to do it as well. Both guys have an identical frame, and both fighters started put at the lighter weight classes. Soto is tough fighter, and he’s not the type to let himself get heavy in between fights.

Rios looked like he didn’t belong at 147 in that fight. His body had the appearance of an overweight lightweight, and Bradley teed off on him, treating him like a punching bag until stopping him with a body shot in the ninth. That’s the only time in Rios’ pro career that he fought for a MAJOR world title at welterweight.

Rios’ fight against Manny Pacquiao was for a trinket title, the vacant World Boxing Organisation International Welterweight. That belt is not one of the major world titles. Anyway, it didn’t end well for Rios, as he was pummeled by Pacquio in losing a lopsided 12 round unanimous decision to him by the score 119-109, 120-108 and 118-108 in November 2013. The most accurate score of that bunch was the 120-108 score. Rios did nothing in that fight but soak up punishment. 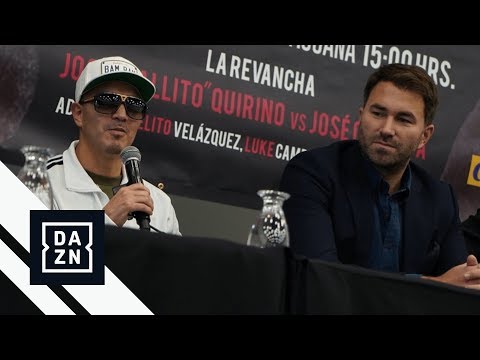 “Soto is a former champion and you can’t take that lightly,” said Rios.

Rios hasn’t been fighting great opposition for a while. In looking back at Rios’ fights against Danny Garcia, Bradley and Diego Chaves, he should have lost all three of those fights instead of just two of them. Chaves was on his way to win over Rios when the referee stopped the fight disqualified the Argentinian for throwing an elbow. There was one round to go, and Rios, who was promoted by Top Rank at the time, was behind on the score cards and getting worked over by Diego. The fights where Rios has looked good was against a weight drained Alvarado, journeyman Herrera and Ramon Alvarez. Those aren’t good fighters. That’s why it could be a mistake for Hearn to have selected Humberto Soto as the opponent for Rios to fight on Saturday. Soto is the best fighter that Rios will have faced since his loss to Danny Garcia. This fight could be a mismatch. Soto is that good of a fighter.

Soto’s last loss was against Antonio Orozco in 2015 in losing a 10 round decision to a fighter promoted by Golden Boy Promotions. Soto looked great in that fight. The scoring was pretty poor. The fight took place at the StubHub Center, Carson, California. Soto was the visiting guy from Mexico taking on the American. It was never going to be easy for Soto to get a win. That fight likely would have been a win for Soto if it taken place in Mexico. He out-fought Orozco for 10 rounds, and found himself on the receiving end of a controversial decision. If Soto loses to Rios on Saturday night, it won’t be because of him being the visiting fighter. Soto is fighting at home in Tijuana. The boxing fans will be on his side. If Rios wants the win, he’s going to have to earn it the hard way by being the better fighter. Rios didn’t look good against Danny Garcia, Chaves and Bradley. Those are the best guys that Rios fought in the last six years since his defeat at the hands of Pacquiao in 2013.

There are a lot of questions that are going to be answered on Saturday night about whether Rios has anything left at this point in his career. Some boxing fans think Rios is punch drunk, saying that he slurs when he speaks. He still punches hard, but he has very little hand speed, and his defense is nowhere to be found.

The body shots from Soto could be key to victory for him if he targets Rios’ midsection on Saturday night. Rios looked in distress the entire time he was getting hit with body shots from Bradley. Soto is arguably a better body puncher than Bradley is. If Soto has watched tape of Rios’ defeats, he’ll have noticed that he can’t take body shots well at all. If Soto invests in going to the body of Rios tomorrow night, we could see him scoring a knockout similar to the KO that Bradley scored over Rios in 2015.


« Joshua wants Wilder fight by end of the year

Joshua: “Wilder need to humble himself” to make their fight happen »