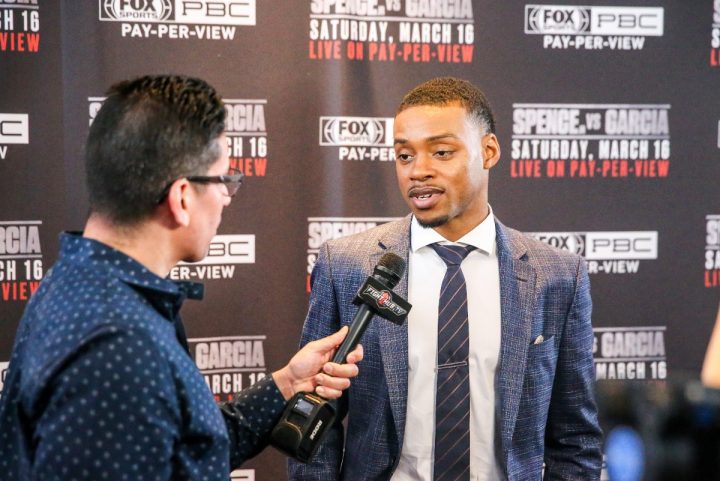 By Chris Williams: Top Rank boss Bob Arum says he’s going to make a financial offer to IBF welterweight champion Errol Spence Jr. for a unification match-up against his fighter WBO champion Terence Crawford for a match in the fall if both guys win their next fights.

“That’s up to the PBC people. What we intend on doing is if Terence is successful in his fight against Khan at Madison Square Garden on April 20th, we will make a proposal, that is Spence defeats Garcia, which I expect, we’ll make a proposal Spence and to Al Haymon for a fight in the fall between Terence Crawford and Errol Spence,” Arum said to Thaboxingvoice.

On the face of it, this is promising what Arum is talking about in wanting to make an offer to Spence for a Crawford fight. The boxing public has wanted to see Spence and Crawford mix it up for a while now. If Arum can make Spence a big enough proposal to get him to agree to the Crawford fight, then it’ll enable them to fight it over the top spot as the #1 welterweight in the division. Spence is viewed as the the king of the lions at 147. Crawford’s resume at 147 is too thin to put him even at number #2 in the welterweight division, because he’s only had two fights against Jeff Horn and Jose Benavidez since he moved up to the welterweight division last summer.

It’s highly unlikely that Spence’s advisers at Premier Boxing Champions will bother to make the fight with Crawford. Spence, 29, has a lot of options available to him still in fights against Danny Garcia, Keith ‘One Time’ Thurman, Adrien Broner, Amir Khan, Shawn Porter, and Manny Pacquiao. If Spence faces Crawford, it likely won’t bring in a huge number of pay-per-view buys, because neither of them have achieved stardom. Crawford’s only other effort on PPV was against Viktor Postol in 2016, and that fight pulled in a little 50,000 buys. Those are anemic numbers. Crawford vs. Khan will likely do similar numbers, because Khan is seen as a shot fighter by a lot of boxing fans. The casual fans that know of Khan in the U.S remember him as the guy that Saul Canelo Alvarez knocked out in the sixth round in 2016. Top Rank picked the wrong guy to put in with Crawford. If they wanted to lure one of the fighters from Premier Boxing Champions, they should have gone after Thurman or Danny Garcia.

“That’s the fight I’d be most interested in,” Arum said about him wanting to make the fight between Spence and Crawford. “We’re going to do it in the same way that we’re making a proposal to Deontay Wilder, and Al Haymon and Shelly Finkel. We’ll make a proposal, assuming both fighters [Spence and Crawford] win in March and April. We’ll make a proposal directly to the fighter [Spence] and his adviser [Haymon], and then we can’t do anything more,” Arum said.

Arum will eventually get his way in making the Spence vs. Crawford fight, but it’s likely going to happen in a couple of years from now. By 2021 or 2022, Spence will have exhausted all the possible fights he can get from the PBC stable, and he’ll then look to the other side of the fence towards a match with Crawford. However, Spence might also move up to 154 or 160 and look to take on the likes of Saul Canelo Alvarez and Danny Jacobs. There’s good money for Spence to make at 160 fighting Canelo or Gennady Golovkin, if he doesn’t retire from boxing.

Crawford is a good fighter, but he needs to build his brand more at 147 before a fight between him and Spence can be a sellable option to the boxing public. Crawford has had too many soft fights against the like of Julius Indongo, Felix Diaz, Jeff Horn, Jose Benavidez, Dierry Jean, John Molina Jr., Henry Lundy, Thomas Dulorme, and Raymundo Beltran. There’s no there, there with Crawford in terms of his resume. You’ll still be able to say that about Crawford after his fight with Khan on April 20. That fight is little more than a lateral move for Crawford from his recent fights with Benavidez, Horn and Indongo. You can’t say that Khan is an upgrade from those guys for Crawford. Khan isn’t a step down, but he’s definitely not a step up either. That’s the whole problem for the 31-year-old Crawford. He’s taking on a guy [Khan] that is effectively yesterday’s news, a fighter that is living off of what he accomplished nine years ago, which was when his career was still going well.

If Spence chooses not to take the fight with Crawford at this time, it’s all good. The fight needs to be built up right now anyway. Crawford needs more time in grade at 147 to help make the fight with Spence bigger. Two fights at welterweight isn’t enough for Crawford to help Spence make their fight a blockbuster. Further, Spence has only been world champion at 147 for two years since beating Kell Brook in May 2017, and that’s not enough time. Spence has defended his IBF title just twice in defeating Lamont Peterson and Carlos Ocampo. That’s not nearly enough fights as a champion for Spence to become the big name that he needs to be for him to rise up to be a PPV fighter. If Spence can clean out the Premier Boxing Champion’s stable of fighters at 147, then that would definitely help make the eventual match-up with Crawford a bigger fight in the future. Mixing in some fights against junior middleweights like Jarrett Hurd and Jaime Munguia would also help Spence. Canelo would be a great fight for Spence. The problem with Spence moving up to 154 and 160 to fight the top guys in those divisions is he might have a hard time going back down to 147 to face Crawford.

Arum: ESPN cut off GGG negotiations because “they didn’t like his attitude” »