Arum: ESPN cut off GGG negotiations because “they didn’t like his attitude” 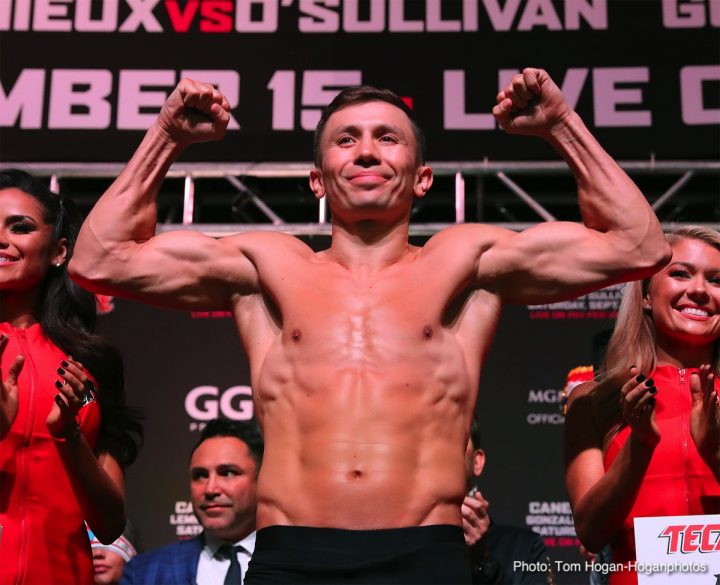 By Chris Williams: Bob Arum of Top Rank says the negotiations between Gennady Golovkin and ESPN were halted because the network “didn’t like his attitude”, and felt it “wasn’t worth the trouble” to try and sign him. However, Arum says Golovkin is always welcome to come back and restart the negotiations. It’s unclear what GGG would need to do for him and ESPN to put together a deal.

The money would obviously be an important part of signing with a promoter that doesn’t have anyone for GGG to fight. In looking at Top Rank’s stable, Golovkin would be limited to a fight with secondary WBA middleweight champion Rob Brant, and very little else other than super middleweights and light heavyweights. There would be no real gain for Golovkin to fight Ryota Murata, given that he was beaten recently by Brant.

Golovkin (38-1-1, 34 KOs) recently lost his rematch with popular Mexican star Saul Canelo Alvarez on September 15 in Las Vegas, Nevada. Like the first fight between them, it was a close affair that could have gone either way. The judges gave it to Canelo because he was the one coming forward trying to make the fight.

“ESPN decided at one point that Golovkin was not worth the trouble,” Arum said to Thaboxingvoice in discussing the negotiations that took place between ESPN and GGG to try and sign the former IBF/IBO/WBA/WBC middleweight champion recently. “There was a meeting held at the ESPN offices. They determined that they didn’t like Golovkin’s attitude, and they cut off all negotiations,” Arum said.

Since Arum isn’t saying what he’s referring to when he says that ESPN “didn’t like Golovkin’s attitude,” it could mean any number of things. It could be that the ESPN brass might not have liked Golovkin asking for too much money, or his maybe he unwilling to bend in his asking price. It could be anything. It’s hard to imagine Golovkin being surly with his disposition. He comes across as a polite individual. It’s a good sign that Arum is welcoming GGG to come back to continue negotiating.

If Golovkin decides not to take Arum up on his offer to restart the negotiation with ESPN, he’s always got DAZN and Premier Boxing Champions to potentially sign with. What it really should come down to for Golovkin is which of the network platforms has the best opportunities for big fights.

Here are the PBC fight options for GGG:

These are the fights available to Golovkin with DAZN:

These are the options with Top Rank Boxing / ESPN:

It’s pretty easy to see from looking at the options that Golovkin would have the most to gain by signing with DAZN, if only to get the third fight with Canelo. A fight between GGG and Jacobs would be him going over old ground in facing a guy he already beat in 2017. Demetrius Andrade does nothing for GGG, and it would be a ugly fight potentially if Demetrius gets on his bike plays keep away. Golovkin is about to turn 37 in April, and he doesn’t have forever to stick around the sport unless a network and promoter is willing to give him a fairly long contract. Golovkin signing a six-fight contract would sound reasonable if the fights could be done within a certain time span. It might not be a good idea to have six fights spaced out over three years, because there’s no telling how well GGG will age. He’s not old in boxing terms, but things could change rapidly if he started aging. What we saw in GGG’s last fight with Canelo was a fighter that was just as good as him. That says a lot because GGG is a lot older than Canelo. When Canelo is 36, it’s not likely that he’ll be fighting as well as Golovkin is now. Canelo’s main strength is his hand speed. Once he starts losing that, he’ll just a short guy with stamina problems, average power, who uses a lot of upper body movement. Without the hand speed, Canelo is going to be a sitting duck for the young lions as he starts to age. It’s unlikely that Canelo will still be fighting when he’s 36. This writer can’t see it. Once Alvarez starts deteriorating in his early 30s, he’ll likely pack if well before he hits 35 or 36. Fighters that depend on speed fall apart when they start aging. Canelo will just be another short guy in the middleweight division, and he won’t last unless promoters at Golden Boy steer him around all the good fighters. You can only swerve so long though. Canelo would have to give up his titles in order to avoid all the good fighters.

“It wasn’t just the money. It was everything else. It was just a negotiation that couldn’t go very far,” Arum said about the negotiations that took place between ESPN and Golovkin. “Now if he comes back, and wants to renegotiate, ESPN would probably give us the green light to negotiate. When those deals like the Golovkin deal involve so much money, it requires us to go to ESPN and for approval, because it’s ESPN’s platform and ESPN+ that is putting up all the money to make these big deals happen,” Arum said about GGG.

This is just Arum speaking. We’re only hearing one side. If GGG had a chance to spill his guts on what took place during the negotiation, he would have a different spin on things. If Golovkin came into the negotiations with a certain price in mind of what he felt he was worth per fight, he might not have been receptive to the offer he was being given. It’s got to be tough Golovkin, because after hearing about Canelo’s 11-fight, 5-year, $365 million deal with DAZN, it would possibly rub him the wrong way if he’s been offered far less than what the Golden Boy star was given. If Golovkin felt that he should have won both fights with Canelo, then he’s not going to be happy at receiving smaller offers. But at the same time if you look at it from a network like ESPN’s side, Golovkin is up there in age, and he doesn’t have a lot of fights left. Moreover, there wouldn’t be anyone popular enough for GGG to fight with Top Rank for him to attract large audiences for PPV fights. Golovkin vs. Brant would be a poor PPV fight. If all Arum has for Golovkin are super middleweights like Jesse Hart or light heavyweights like Gilberto Ramirez from his Top Rank stable, that’s going to be bad GGG, and those fights probably wouldn’t attract fans either. Golovkin is a popular fighter, but he still needs to face other popular guys in order to be a PPV guy.

“Once that meeting broke up, we felt it was goodbye Gennady Golovkin,” Arum said about the negotiations between GGG and ESPn. “But we haven’t heard back that he’s signed with anybody else. If he comes back, and makes a proposal that we could live with and ESPN could live with, absolutely, we would be interested, but we’re not going to chase [Golovkin],” Arum said.

Top Rank and ESPN are paying former heavyweight champion Tyson Fury a lot of money for him to fight on their platform. You have to wonder whether there’s money left over to sign a popular middleweight like Golovkin. Fury might not even pan out. Once Fury faces Deontay Wilder in their rematch and Anthony Joshua, he could be knocked out by both. At that point what does Top rank and ESPN do with the 6’9″ British heavyweight? Do they keep him under contract or is there way of releasing him? Fury just being a good talker isn’t enough for him to attract boxing fans if he can’t win against the best. ESPN and Top Rank might end up wishing they had signed Golovkin if Fury ends up being a big disappointment.