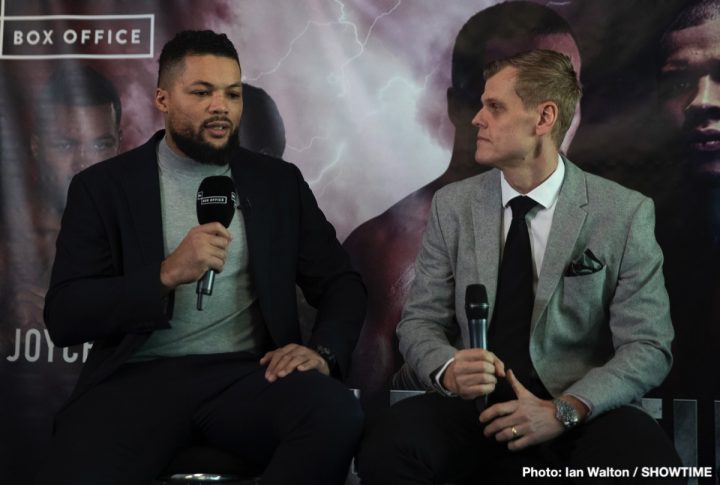 By Trevor McIntyre: Trainer Abel Sanchez admits that he said no to the idea of unbeaten contender Joe ‘Juggernaut’ Joyce (7-0, 7 KOs) facing former heavyweight world title challenger Luis ‘King Kong’ Ortiz (30-1, 26 KOs) for his next fight this Saturday night on February 23 at the O2 Arena in London, England.

Sanchez feels that the 33-year-old Joyce wasn’t ready for the talented Cuban Ortiz, who had an extensive amateur career while fighting in Cuba. Sanchez feels that the 2016 Olympic silver medalist Joyce will be ready to face someone like Ortiz after two more fights. Sanchez still didn’t say that Joyce would actually fight the 39-year-old Ortiz, but rather someone similar to him.

“He [manager Sam Jones] mentioned Luis Ortiz at the press conference for the last fight, and I said, ‘there’s no way we’re going to fight Ortiz.’ We’re not ready for Ortiz,” Sanchez said to IFL TV about not wanting to let Joyce fight Ortiz. “That’s a step where in two more fights, we’ll fight a guy like Ortiz. Right now, it’s Bermane. He’s the type of style I want for Joe; not because he got knocked out by Deontay, but because he has the style that I want for Joe. If we’re successful on Saturday, then we’ll start preparing for the next style we want to develop for Joe. His presence is going to be a force just like [a young] George Foreman was,” Sanchez said.

Sanchez can’t baby Joyce for too long. He’s 33, and before you know it, he’ll be the same age as the 39-year-old Ortiz. Sanchez says he wants to have Joyce fight for a world title in late 2019 or early 2020, but that’s not likely going to have by him not facing the type of guys that will have him pushed up the rankings in the division. Anthony Joshua likely won’t give Joyce a voluntary defense, because he’s too good of a fighter to be given a shot freely.

Stiverne is a slow, heavyweight fighter, who hasn’t looked like the same fighter that he once was in his last couple of fights. Sanchez says he wants Joyce to get ready for Stiverne’s style of fighting, but he looks more like a fighter that soaks up punishment at this point in his career. There’s nothing to get ready for. Joyce wins this fight as long as he can throw punches, and not get tired out from landing his shots. The type of style that Joyce should be preparing for is someone that is tall, and hits back. Ortiz would have been perfect.

Ortiz is arguably the most avoided heavyweight in the division today. Anthony Joshua and Dillian Whyte’s boxing fans say that the 39-year-old Ortiz is irrelevant because he’s an older heavyweight, and he has nothing to offer them in terms of popularity. But then you see Joshua fighting 39-year-old Alexander Povetkin, 37-year-old Eric Molina and 38-year-old Carlos Takam, and it shows that age isn’t the reason why Ortiz is being avoided and neither is his lack of popularity. Povetkin, Molina and Takam aren’t popular fighters in the UK or the U.S. Whyte has recent fights against 35-year-old Dereck Chisora, 40-year-old Lucas ‘Big Daddy’ Browne, 35-year-old Robert Helenius and 41-year-old Malcomn Tann. These are all recent fights for Whyte in the last two years. If Ortiz is too old for Whyte to be fighting, then why did he fight Tann, Helenius, Chisora and Browne? Ortiz is ranked #3 with the World Boxing Council. He’s not a lowly ranked heavyweight. He’s rated high, but Joshua and Whyte still haven’t fought him. Whyte is now looking to face #4 WBC Dominic Breazeale next, who is ranked below #3 Ortiz in the WBC’s top 15 ranking. The WBC has ordered an eliminator with Breazeale and Whyte instead of having Ortiz included.

Joyce will be fighting for World Boxing Council heavyweight champion Bermane Stiverne (25-3-1, 21 KOs) this Saturday night in a 12 round fight. Sanchez states that this is a step up for Joyce despite Stiverne not having fought in 15 months since his first round knockout loss to WBC heavyweight champion Deontay ‘Bronze Bomber’ Wilder in November 2017, and not having won a fight in three and a half years since his 10 round unanimous decision win over journeyman Derric Rossy in November 2015.

“Hopefully this is the kind of animosity we see in the ring on Saturday night,” Sanchez said about the mutual dislike between Joyce and Stiverne showed in their final press conference before their fight this Saturday night on SHOWTIME. “We feel he’s [Joyce] ready for that step. I think Bermane Stiverne represent the kind of experience that we could use in preparing ourselves for the end of the year or the beginning of next to fight for a world title,” Sanchez said.

You can’t criticize Sanchez for not wanting to put the green 6’6″ Joyce in with a proven veteran like Ortiz. Anthony Joshua and Dillian Whyte haven’t stepped up to fight Ortiz either. The most notable heavyweight that has faced Ortiz is Wilder, and he was almost knocked out by him in the seventh round after getting clipped by a huge left hand that rocked him badly. If Ortiz hadn’t run out of gas while trying to finish Wilder off, he probably would have stopped him in the 7th round. Wilder caught a lucky break when the New York State Athletic Commission checked him out before the start of the 8th to see if he was okay. That delay of the start of the eighth round seemed to benefit Wilder, as it gave him time to recover from the previous round.

Wilder made it through the eighth, and hurt Ortiz late in the 9th, and then finished off by knocking him down twice in the 10th. Joyce isn’t the same kind of puncher that Wilder is, so it would be a much more risky fight for him to fight Ortiz. Undisputed cruiserweight champion Oleksander Usyk is going in the opposite direction of Ortiz in targeting Alexander Povetkin for his first fight at heavyweight. Ortiz is someone that is not sought out by the top fighters in the heavyweight division, although his name is frequently mentioned in connect with Whyte when it comes to him looking for opponents, but he’s never selected for some reason. Joshua is fighting a guy that is there to be hit in 315 pound Jarrell Miller. You can argue that Stiverne is a smaller version of Miller. The same kind of physique, but with more power and definitely older at 40. Miller is 30, but looks older.

“Joe Joyce was one of the most decorated fighters in the UK,” Sanchez said. “He’s a silver [Olympic] medalist. He’s progressed really well in the gym for me in the last seven months, so we feel he’s ready for the next step. We’re prepared to fight the guy that took Deontay Wilder 12 rounds, and the guy that beat [Chris] Arreola for the title,” Sanchez said.

Stiverne isn’t the same fighter he was when he beats Arreola in 2013 and 2014. Those fights were a long time ago, and Stiverne has soaked up punishment from two fights with Wilder since, and he’s dealt with a massive amount of inactivity. After Stiverne’s 10 round unanimous decision win over Derric Rossy in November 2015, he was out of the ring for two years until returning to the ring for an arguably undeserved rematch with Wilder in November 2017, which Bermane lost by a first round knockout.


« Artur Beterbiev vs. Sven Fornling possible for May 4 on ESPN in Stockton, CA