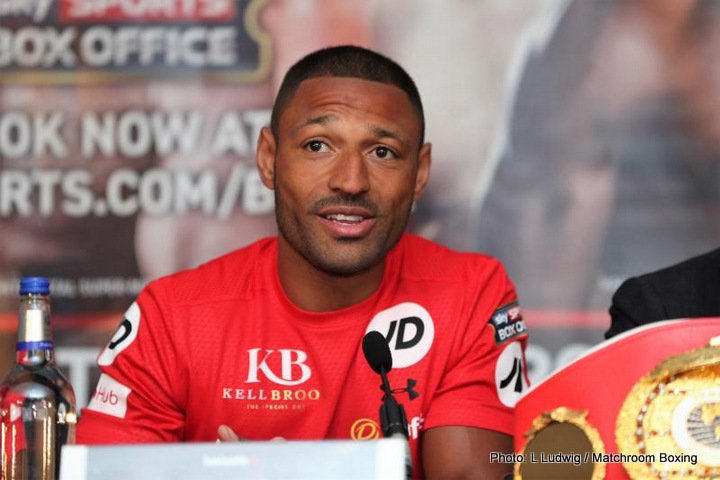 By Scott Gilfoid: Kell Brook’s December 8th opponent is rumored to be little known Australian Michael Zerafa, according to social media, and Amir Khan doesn’t think too much of his choice. For the hardcore boxing fans that remember Zerafa (25-2, 14 KOs), he’s the guy that Peter Quillin destroyed in five rounds back in 2015 in a tune-up fight.

With all the talking that Kell had been doing about how he was moving up to 154 to take over the division, this is a HORRIBLY disappointing opponent in Zerafa. This is an actual step down for Brook from his last mismatch against bottom fringe contender Sergey Rabchenko. I’m just saying. Zerafa makes Rabchenko look like a world champion in comparison. Just why Brook’s promoter Eddie Hearn is setting him up with a fight against Zerafa instead of at least a world class contender from the 154 lb weight class is anyone’s guess.

It is highly interesting that Eddie Hearn STILL hasn’t announced Brook’s opponent officially for December 8 despite the fact that there is now less than six weeks to go before the fight. I mean, when you have a fight involving a big name that still isn’t announced with six weeks to go, it tells me that we’re talking MAJOR mismatch. Brook is capable of beating better opposition than Zerafa, isn’t he? Hearn talked it up after Brook moved up to 154 earlier this year, making it sound like he was on his way to big things in the junior middleweight division. Instead, we’ve seen Brook destroy a fringe level fighter in Rabchenko, while seemingly ignoring the title offers from Jarrett Hurd and Jermell Charlo, and now about to take on a 2nd tier fighter in Zerafa. I must say it’s HIGHLY disappointing.

Quillin was criticized for facing Zerafa at the time due to the fight being such a mismatch, and it turned out to be a worse fight than many boxing fans imagined. Quillin was nailing the completely over-matched Zerafa at will, batting him around the ring like a baseball. It wasn’t even a fight. Since Zerafa’s loss to Quillin, he’s won his last eight fights, beating unknown opposition while burning through three years of his career. If Zerafa does get the fight against Brook, the outcome will likely be just as one-sided as the Quillin-Zerafa fight from three years ago in 2015.

Here’s what Khan said on his social media about Brook’s choice of opponent for December 8:

“Really! You mention me in all your interviews saying, ‘I want to fight khan next. All the crying you do, then you go and fight another bum 🤔. What’s the delay Kelly? Your a joke. PS: You better not lose in December! ‘I won’t be ringside!’”

So there it is. Khan doesn’t think too much of Brook taking on Zerafa rather than one of the talented junior middleweights in the 154 lb weight class. It’s completely understandable why Khan (33-4, 20 KOs) isn’t happy about Brook, 32, taking on another soft touch, because it doesn’t help build a fight between them in February or March of next year. Brook is supposed to be trying to create interest in a Khan-Brook fight with his December 8 fight, but apparently he’s decided to take on a lesser opponent to what shapes up to be another showcase fight for him. Showcase = mismatch to make him look good.

Zerafa has recent wins over these guys: Wade Ryan, Jose Agustin Feria, Adam Harper, Tomas Andres Reynoso, Renato Oliveira, Istvan Zellerm Yosuke Kirima and Gustavo Alberto Sanchez. Those guys have chewed up three years of Zerafa’s career since his loss to Peter Quillin in 2015. It’s understandable that Zerafa would want to get a confidence booster or two after the way that Quillin obliterated him in 2015, but come on. Zerafa should have stepped it back up against world class opposition at some point rather than letting three years fly without facing anyone with talent. At this point, Zerafa is clearly not going to be ready for a fighter like Brook, even though Kell is on the decline with his career since losing to Gennady Golovkin and Errol Spence Jr.

Khan might be better off going in another direction if this is the type of opponent Brook is going to be fighting on December 8. Khan, 31, has already said that for Brook to get a fight against him, he’s going to need to agree to fight him at 147 and accept a 10-lb rehydration clause that will keep his weight down to 157 lbs for a secondary weigh-in on the day of the fight. Khan should throw in another condition for Brook to get the fight by telling him that the only way he can get the fight against him in 2019 is if he fights a good junior middleweight on December 8, and not a fodder guy. It would be perfectly reasonable for Khan to tell Brook that he needs to fight one of these guys before he’ll agree to fight him next year:

Khan would be in his right to insist that Brook beats one of those fighters for him to earn a fight against him, because if he faces another soft job on December 8, he’s going to arguably hurt the Khan-Brook promotion by making it look like a sick money grab, which in all intents and purposes it is. If Brook wants to make the Khan fight HUGE, he’s got to fight one of the talents in the above list. Facing Zerafa will cripple the Khan promotion in my view, as it’ll make it look like an old timer’s fight between two guys that can’t cut it against the top level opposition in their respective divisions. Brook facing an easy opponent like Zerafa is him basically conceding that he can’t cut it against the top talents in the 154 lb weight division. In that case, Khan shouldn’t waste his time fighting Brook, because there are plenty of fighters in boxing that can’t cut it against the cream of the crop at 154. Khan can find someone that fits that any day of the week.

It’s difficult to root for Brook getting the Khan fight at this point due to the soft route that he’s taking to get the fight. It just looks like Brook’s whole purpose at this point is to make sure he gets to the Khan fight for his cash out payday in one piece without getting beaten yet again. Brook taking the easy route to get to Khan for his golden parachute retirement money makes him look bad in the view of a lot of boxing fans. Even after been stopped by Errol Spence Jr. in 2017 and Golovkin in 2016, Brook is likely capable of still beating world class opposition at this point in his career. Granted, there’s a good chance Brook would fall apart physically if he fought a gift 154 lb fighter like Lara, Sulecki, Julian ‘J-Rock’ Williams or Carlos Adames, but that’s the risks you have to take to make a fight against Khan a huge one instead of undermining it by facing an easy opponent like Zerafa. Khan has fought some soft jobs as as well in his last two fights against Samuel Vargas and Phil Lo Greco, but at least in his case, he’s been trying to get a fight against a good welterweight in Manny Pacquiao. Brook is just chasing Khan while taking on easy opponents in between. It’s a bad look on Brook’s part, isn’t it?

At this point in Brook’s career, his claim to face was losing to Gennady Golovkin and Errol Spence Jr. Those are the hallmark fights on Brook’s resume. Brook’s only win over a talented fighter was a controversial, clinch-filled 12 round majority decision victory over Shawn Porter in 2014. A lot of boxing fans saw Brook losing that fight, as did this writer. Brook gamed the system by throwing single shots and then immediately crashing forward to tie Porter up all night. It was fight that screamed out for a disqualification, as it was painfully obvious that Brook was gaming the system by holding intentionally after every pot hot he threw. The referee just stood and watched all night long without penalizing Brook and disqualifying him. You had to feel sorry for Porter, because he was mugged all night long by Brook.