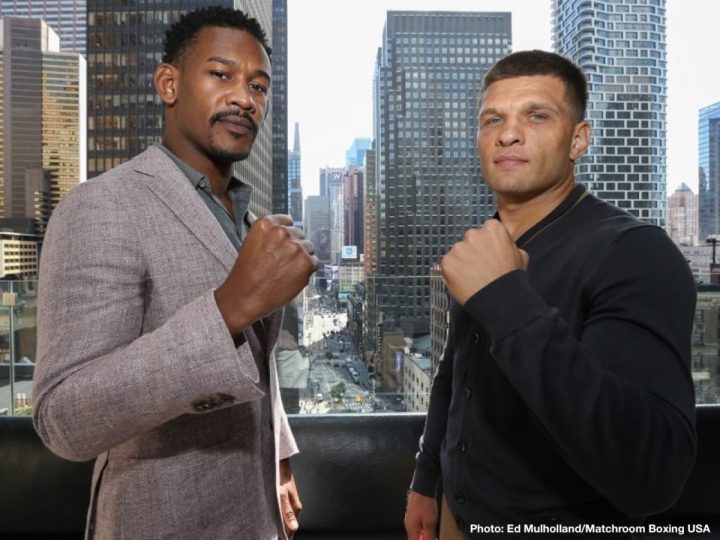 The perception from the boxing public is Jacobs and Derevyanchenko are old friends, and this is just a buddy-buddy fight between them. Derevyanchenko, 32, hasn’t helped matters by seeming so mild-mannered in the presence of Jacobs. Derevyanchenko looks like he’s just happy to be there fighting Jacobs, and it makes it difficult for the fans to see the Ukrainian as having any real shot at winning the fight.

The size difference between the two fighters add to it. Derevyanchenko, 5’9″, looks like a small 154 lb fighter facing a guy from the 168 lb division in Jacobs. Them meeting at 169 gives the impression that this is a catchweight fight, and for all intents purposes it is. Jacobs is a huge middleweight, and it’s going to be difficult for him to make the International Boxing Federation’s 10-lb rehydration limit for the secondary weigh-in on Saturday morning. Jacobs and Derevyanchenko can’t weight more than 170 lbs, and that’s not going to be easy for him to do. He likely wishes that he wasn’t fighting for the IBF title at all, because if he were fighting for the WBA, WBC or WBO middleweight belts, he wouldn’t have to worry about the 10-pound rehydration rule. Jacobs skipped the IBF’s secondary weigh-in last year when he challenged Gennady Golovkin for his middleweight titles. Jacobs used the extra time to rehydrate fully, and he didn’t have to abide by the IBF’s 10-lb rehydration limit on the morning of the fight.

“There’s no personal relationship,” said Jacobs to Fight News. “I don’t dislike the guy. I think he’s a really phenomenal, humble gentleman. But, he doesn’t know English so it’s really hard for us to have any relationship outside of the gym or saying hello and goodbye. I haven’t heard him say five English words. So, it’s really like, it’s kind of hard to have a real relationship with somebody that can’t speak English. But, I do know that he’s a very nice guy,” Jacobs said.

It doesn’t matter what Jacobs says about him not being friends with Derevyanchenko. The boxing public already views the fight as a match between friends, so it doesn’t matter that he says he’s not friends with the 2008 Ukrainian Olympian Derevyanchenko. Hopefully, this fight doesn’t resemble some of the fights boxing fans have seen in the past between former sparring mates where the two touch gloves before and after every round. It’s going to be a real disappointment from fans if that’s the case, because there’s a lot riding on the fight. The winner of the Jacobs-Derevyanchenko fight is probably going to be facing WBC middleweight champion Saul Canelo Alvarez in May 2019 on DAZN. So certain that Jacobs is going to be the one that faces Alvarez in May, Matchroom Boxing USA promoter Eddie Hearn is already talking up the Canelo-Jacobs fight, assuming that Derevyanchenko will be little more than a speed bump for the ‘Miracle Man’ Daniel on Saturday night. Hearn says Jacobs is the best middleweight in the division, and that he already beat Golovkin in their fight last year on March 18, 2017 at Madison Square Garden in New York. Hearn invalidated the judges’ decision in giving Golovkin the win. Hearn says Jacobs won that fight, and he’s sold on him fully as the best fighter in the 160 lb weight class.

“I do know that he’s always respectful,” Jacobs said in continuing to convince the boxing fans that he’s not friends with Derevyanchenko. “He’s very humble. I know these things…but none of that stuff matters when so much is at stake. You got to understand. When you’ve been fighting all your life and you get this close to your goal, it really didn’t matter who is in there.”

Jacobs can’t lose this fight if he wants to stay in the running for the Canelo Alvarez fight next year in May 2017. Hearn might be right about Jacobs having a great chance of getting the fight against the 28-year-old Alvarez. We won’t know until after he beats Derevyanchenko whether there’s any serious interest on Golden Boy Promotions’ part in letting the 6’0″ Jacobs fight their shorter 5’8″ star Canelo. Jacobs might shoot himself in the foot if he looks too good in beating Derevyanchenko, because Canelo is coming off two controversial fights against Gennady Golovkin that could have been scored as losses for the Mexican star. We still don’t know what’s going to happen in Canelo’s next fight against WBA ‘regular’ super middleweight champion Rocky Fielding on December 15 at Madison Square Garden in New York. While it’s supposed to be a certain victory for Canelo, you can’t know for sure. He didn’t fight well enough against Gennady in their two fights to say that he deserved the win in the fights. If Fielding is about to fight at even 75% of what Golovkin did, he’ll rate a draw against Canelo. With the Canelo-Fielding fight taking place in New York, Fielding stands a good chance of getting a decision because this neutral territory.

Jacobs took a lot of hard blows from Golovkin in their fight last year, and he’s not looked the same since then. Jacobs has won his only two fights since his loss to GGG last year, but he looked unimpressive in beating Luis Arias and Maciej Sulecki. Jacobs looked shaky in both fights, especially the Sulecki fight. Derevyanchenko is a big upgrade over those two fighters in the punching power department. If there’s a major flat in Jacobs’ game, it’s his ability to take head shots. Dmitry Pirog, who was never a major knockout threat, stopped Jacobs in the 5th round in 2010. Golovkin had Jacobs hurt on a couple of occasions last year, and he mostly boxed him throughout the encounter. Golovkin fought a crazy fight by boxing Jacobs instead of following the Pirog blueprint in pressuring the New Yorker and hitting him with hard head shots until he folds. Golovkin used the wrong game plan to beat Jacobs, but he was still successful in beating him Derevyanchenko will likely be smart and follow Pirog’s plan in beating Jacobs, because that’s the proven method in defeating him.

« Breazeale hoping to face Deontay Wilder in summer of 2019