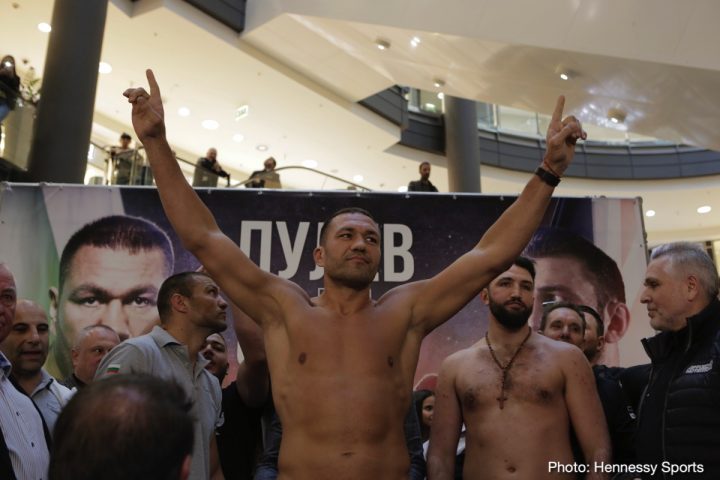 By Tim Royner: Kubrat Pulev (25-1, 13 KOs) looked in fine shape in weighing in at a solid-looking 240.5 pounds on Friday for his IBF heavyweight title eliminator fight against former world title challenger Hughie Fury (21-1, 11 KOs) for their fight on Saturday night, October 27 at the Arena Armeec, Sofia.

The younger fighter Fury has a chance of winning this fight due to the inactivity of Pulev, who hasn’t fought in 1 1/2 years since beating journeyman Kevin Johnson in April 2017 in Bulgaria. Pulev didn’t look sharp at all against Johnson. Pulev did a lot of fouling with rabbit punches in that fight, and the scores were far wider than they should have been. Johnson gave Pulev a lot of problems in that fight, but you wouldn’t know it based on the wide set of scores from the judges. If Pulev fights in a similar way against Hughie on Saturday night, then we could see him lose if the judges score the contest in an accurate manner. That’s the big question. Will the judges do a good job of scoring it or will Hughie need a knockout to win. Given Hughie’s complete lack of punching power, you would have to figure that he’s really up against it with very little chance of winning the fight.

Pulev and Fury are trying to lock themselves into the IBF mandatory spot to get a life-changing payday fight against IBF belt holder Anthony Joshua (22-0, 21 KOs) in the future. The winner of the Pulev-Hughie fight will likely need to wait until 2020 before they get the fight against the 6’6” Joshua, but that’s okay. As long as they get their fight, they’ll get some nice retirement dough.

Hughie, 23, looked a little soft around the midsection at the weigh-in. Hughie supposedly had a tough training camp, but you can see that he has a stomach on him, showing that he hasn’t been missing too many meals since he blasted out British heavyeight champion Sam Sexton in five rounds earlier this year on May 12 in a fight for a domestic strap. The 6’6” Hughie is going to need to find some punching power for him to win this fight, as he doesn’t possess the same kind of jab that the 6’4 ½” Pulev has going for him, and he clearly doesn’t have the same kind of experience as him. The main thing that Fury has going for him is he’s related to former heavyweight unified champion Tyson Fury. As such, there’s a chance, slim as it is, that if the fight goes to the scorecards, the judges might give Hughie a decision.

Saturday’s Pulev vs. Fury fight breaks down to these areas:

– Experience: Pulev by a huge margin

– Stamina: Pulev. Hughie has a habit of fading deep in his fights. We saw that in his fight against journeyman Fred Kassi in their fight in April 2016. Hughie looked good in the first five rounds, but then he gassed out in the 6th and began taking punishment from the much shorter 6’0” Kassi. In the 7th, Hughie crashed into the head of Kassi in a face-first move. It looked to some like Hughie wanted out of the fight in the worst way. The Billy Goat move by Hughie caused him to suffer a bad cut under his left eye, which led to the ringside doctor halting the fight and letting it go to the scorecards. Hughie won the fight by a 7th round technical decision, but it sure did look like he was bailing out due to fatigue.

Pulev, 37, is a lot older than the 23-year-old Fury, but the former Bulgarian amateur star is a young 37. Pulev fights more like a guy in his last 20s than he does someone pushing 40. As a result, you can’t say that age will have any bearing in the fight. Pulev doesn’t have stamina issues that often comes with age, and his speed and power both appear to be as good as they’ve been in the past. There’s no signs of deterioration with Pulev as far as I can tell. Pulev is the same guy that challenged former IBF/WBA/WBO heavyweight champion Wladimir Klitchko for his titles four years ago in 2014 – and lost by a 5th round knockout.

This is Pulev’s big chance to get the title shot against Anthony Joshua that he missed out on in October 2017 after he suffered a shoulder injury 10 days before the fight and wound up being replaced by Carlos Takam. With the kind of money that Pulev would have made in the fight with Joshua, it was a big disappointment that he had to pull out with the unexpected injury.

Hughie lost to Joseph Parker by a 12 round majority decision last year in September 2017 in a poor effort to win the World Boxing Organization heavyweight title from the New Zealand fighter. Hughie looked like he didn’t want to be there on the night. His main plan for the match seemed to suggest that he just wanted to survive to see the final bell and hope that the judges would give him a break by giving him the decision. With the Parker-Fury fight taking place in Manchester, England, it wasn’t a bad strategy by Hughie to just spoil for 12 rounds, as one of the judges gave him a draw. However, the other two judges had their eyes opened and scored it the way many of the fans did in giving Parker the victory by the scores 118-110 x 2. If Hughie hasn’t learned from his loss to Parker, he could try the same tactic against Pulev in hopes that he might get lucky and win the fight. It’s probably not going to work for Hughie, however, because he’s fighting in Bulgaria, so he’s going to need to earn the decision.

Pulev comes into Saturday’s fight with a 5-fight winning streak since his loss to Klitschko in 2014. It’s disappointing that Pulev has fought just five times in the last four years. That shows that he’s not been keeping busy in the way that he should for him to stay sharp.