Canelo says GGG is drowning and looking for excuses 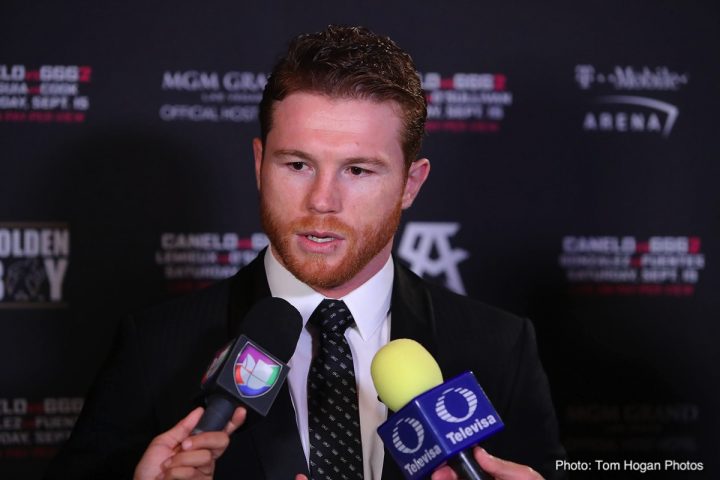 By Morgan Lopes: Saul Canelo Alvarez says the comments Gennady Golovkin made this week about seeing needlemarks on his physique suggests that he’s a drowning man looking for excuses to give to the boxing media about his impending loss on Saturday.

Canelo (49-1-2, 34 KOs) feels that GGG needs an excuse to get the fans to get off his case when everything goes badly for him on Saturday in their rematch at the T-Mobile Arena in Las Vegas, Nevada.

With worry and doubt in the mind of Golovkin, the only thing he can do is talk about Canelo’s past positive tests for clenbuterol to try and make him look bad. Canelo sees GGG as a worried fighter in search of a ready made excuse to give to the fans.

Canelo, 28, has already made it clear that his 2 positive tests last February were a product of him having eaten contaminated meat in Mexico. Canelo tested negative on the subsequent hair follicle test that was done by the request of the Nevada State Athletic Commission, which showed that he hadn’t the substance in his system on high enough levels for it to be detectable. Canelo never tested positive before or since in the VADA tests.

“Those are the kicks and screams of someone who is drowning,” Canelo said via Fighthub. Those are the excuses they are making for what is coming this Saturday, which is a loss for them. Look, I’ve been monitored for most of my career, I’ve been monitored by VADA since 2011, and that’s why they have authorities. If I would’ve had something the authorities would’ve picked it up. But basically it’s an excuse for what is coming on Saturday.”

Canelo doesn’t want to take his anger out on GGG on Saturday night. He plans on staying under control and methodically breaking down the older, slower 36-year-old GGG until he stops him inside the distance. Canelo says Golovkin’s punching power is still not what many thought it was. He wasn’t impressed with his power at all, and told his trainer Eddy Reynoso that he’s not a big puncher.

As much as GGG has talked about wanting to do things differently in the rematch by bringing a different strategy, the second fight is going to likely be similar to the first one. If Golovkin was going to show improvements, he would have done it in the first fight. Golovkin had 12 rounds to solve Canelo’s style and he couldn’t do it. If Golovkin couldn’t figure Canelo out last time, he’s not going to be able to show any improvements in the rematch. It’s all wishful thinking for Golovkin if thinks he’ll suddenly solve the Canelo riddle this time.

“It can be dangerous to go in there with a hot head, you might make a mistake,” Canelo said. “But I have the experience where I can do it intelligently. I can get in the ring and use it intelligently in this fight.”