What we learned from Fury vs. Pianeta 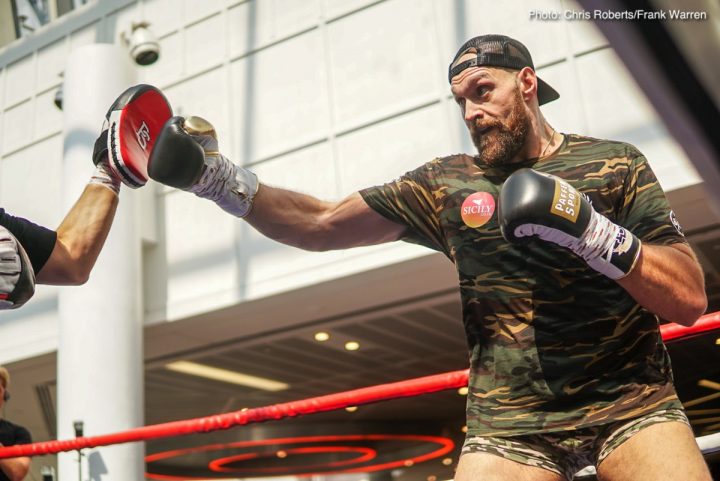 By Rob Maclean: Tyson Fury (27-0, 19ko’s) took a comfortable points victory on Saturday night from Francesco Pianeta (35-5-1, 21 KOs) on the undercard of Carl Frampton vs. Luke Jackson, in Belfast Ireland. Watching closely was the, now confirmed, next opponent of Fury, Deontay Wilder (40-0, 39 KOs). The Alabama native came to the UK not only to announce the fight, but also to scout the progression of Tyson Fury since returning from prolonged inactivity.

Firstly, it must be said that there is two ways of viewing the Fury performance. Any fighter who can trim ten stone of fat in a year and win a ten-round boxing match against a former world title challenger deserves immense credit. However, the fact remains that Fury will take on the unbeaten American next and therefore his performance will draw comparison to Wilder’s performances. Based on this fact, what did we learn from Tyson’s victory?

Initially, you have to look at the threat of Deontay Wilder, and his great strengths, one of which happens to be his naturally athletic style. Wilder possess immense hand speed something which Fury looked short on in this fight. Wilder’s latest victory against Luis Ortiz saw him gain the final finish by a counter right-hand, and slow hand speed leaves a fighter open to counters.

Fury did prove he has regained his excellent fight stamina by going the distance and even seeming to have more rounds left in his tank. Tyson Fury used his immense stamina against Wladimir Klitschko. When you consider the number of faints and the constant movement in that performance, it’s rare to see a man standing at 6’9 fight 12 rounds at that pace. Wilder has gone the distance once before, his 12-round stamina has yet to be tested by a world class fighter.

A big concern from this fight was the lack of the jab from Tyson. It wasn’t difficult for Pianeta to close the distance. Fury needs to take full advantage of his reach against Wilder, who also prefers to fight at range. In between one of the rounds, new trainer Ben Davison asked him to get close to Pianeta and change angles to land on the inside. It was obvious from anyone watching the fight that this isn’t Fury’s game. He has huge wingspan and asking him to fight close limits his punches and eventually he smothered some of his best work.

Another reason Tyson needs to keep his left hand busy is due to Wilder’s style. Wilder doesn’t throw enough jabs and he, way too often, uses his left hand to gauge distance. In fact, if you watch Wilder, he only ever throws his best punch, his straight right, after gauging the distance. Fury needs to keep that hand busy. But this tell of Deontay Wilder, the judging of distance with the left hand, could be his biggest downfall against Fury.

Fury proved that he hasn’t lost any of his fantastic boxing IQ. He can gauge distance easily, evade attacks with movement and timed punches. If Wilder cannot hide his right hand from Fury, and doesn’t mix in a more regular jab, he will have problems landing.

Fury’s combination punching was evident and that’s because he knows when to let his hands go. This has always been a huge strength of Fury’s even before he linked with former trainer and uncle Peter Fury. He has often mentioned how the likes of Joshua only know the one-two combination and left hook, whether this is true or not, he does have a greater range of punches than most heavyweights.

Ultimately, the fight all depends of Tyson Fury and where he is in preparation for Wilder. Anything less than the Fury we witnessed beat Klitschko will lose to Wilder. However, if Fury can show quick hands and bring his fainting jab back into play, he has a major chance of nullifying Wilder completely.

The date for the fight will be announced shortly.