Arum says Wilder vs. Fury much bigger than Joshua-Povetkin 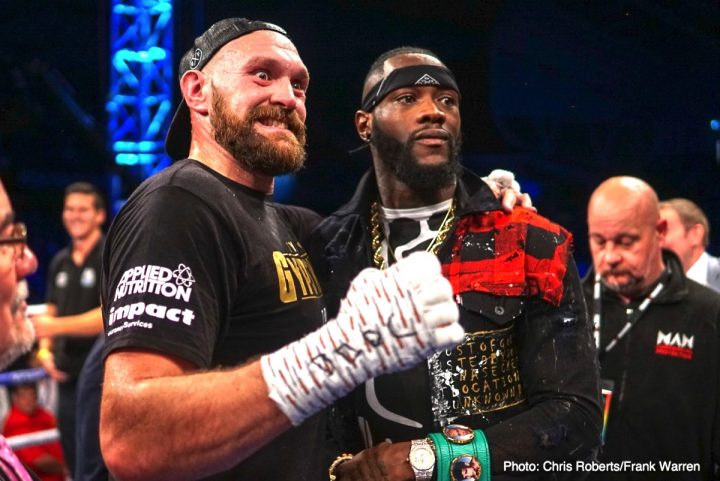 By Scott Gilfoid: American promoter Bob Arum says the Deontay Wilder vs. Tyson Fury fight will be a much bigger fight than the heavyweight match in the UK between IBF/WBA/WBO champion Anthony Joshua and Alexander Povetkin. The Fury-Wilder fight was announced last Saturday night after Fury defeated Francesco Pianeta by a 10 round decision at Windsor Park in Belfast, Northern Ireland.

The attention the Fury vs. Wilder fight is getting already has completely overshadowed the Joshua-Povetkin hype, which sadly is nonexistent. Arum, 86, can see that Wilder’s fight with Fury is going to likely blow away Joshua’s numbers for his title defense against World Boxing Association mandatory challenger Povetkin (34-1, 24 KOs) on the 22 of September at Wembley Stadium in London, England. Fury and Wilder are going to make a ton of money in their fight. There’s still no date or venue for the fight, but it’s going to be announced shortly, according to Fury’s promoter Frank Warren.

”I think that’s a great fight, and it makes the Joshua-Povetkin fight look like small potatoes,” Arum said to FIghthype. ”Wilder has got a punch, but Fury can box well. That’s why it’s a good fight. I think he can really crack, but he’s got to be able to hit Fury and Fury can take a good punch,” Arum said about Wilder. ”It’s a very good fight and it’s good that it’s in the United States. Let the Brits watch fights that aren’t nearly as good over there,” Arum said.

The thing about Fury is he’s not afraid to take on Wilder after a long period out of the ring. Joshua rejected the fight with Wilder when it was offered to him. Many boxing fans believe that Joshua was too afraid to fight Wilder and risk losing badly to him, so he instead choose the safer, smaller money fight against 38-year-old Povetkin. The move makes Joshua look weak, as he’s taken loads of criticism from boxing fans and from former world champions like Lennox Lewis. Fury is arguably receiving a massive amount of respect today for agreeing to fight Wilder after Joshua reportedly turned down an offer of $50 million to face the American talent Deontay. What makes Fury look even better is the fact that he’s willing to take on Wilder while not in the best shape after 2 ½ years out of the ring. Fury needs to take off more weight, and he needs more tune-up fights under his belt to increase his chances of beating Wilder. Fury doesn’t care. He’s willing to take the Wilder fight while he’s not in peak condition. The question is would Joshua do the same?? Would Joshua’s promoter Eddie Hearn let him take a fight with Wilder in his third fight back from a 2 ½ year layoff and after having weighed close to 400 pounds?

Fury (27-0, 19 KOs) took 2 ½ years off from boxing and ballooned up to nearly 400 pounds during that time. Through superhuman effort, Fury has taken most – but not all – of the weight that he put on during that time away from boxing. Fury’s 10 round decision win over Francesco Pianeta (35-5-1 21 KOs) wasn’t a great performance, but it was a good enough effort to show promise of improvement for a match against the 6’7” Wilder later this year.

There’s a chance that Wilder vs. Fury could bring in more money that Joshua’s fight against Wladimir Klitschko in 2017. The interest in the Fury-Wilder fight seems to be much higher than that one. The difference is Wladimir was old at 41-years-old, coming off of a 2-year-layoff and a defeat at the hands of Fury when he was selected by Joshua’s promoter Eddie Hearn for him to fight last year in April 2017 at Wembley Stadium. The fan perception was that Joshua was fighting an old and over-the-hill Wladimir instead of someone in his prime like Wilder. What’s interesting is that Wladimir still ended up almost knocking Joshua out. He probably would have if he had went on the attack after he knocked down a

badly fatigued Joshua in the 6th round. Wladimir played it safe after that instead of using his common sense and finishing off Joshua.

Fury won a one-sided 10 round points decision win over the 33-year-old Francesco Pianeta last Saturday night to earn him a crack at WBC heavyweight champion Deontay Wilder. Fury had his win in getting the better of the 6’5” southpaw Pianeta in winning 100-90. The win for Fury was his second since returning to the ring. Fury didn’t appear to be trying and knock Pianeta out despite having him hurt from body shots in the 8th round. Pianeta was there to be stopped in that round if Fury had gone all out, but he looked like he was more interested in getting rounds under his belt in order to get the rust out from 2 ½ years of inactivity. In Fury’s first fight of his comeback last June against Sefer Seferi, his opponent quit after four rounds even though he wasn’t being pressured. Seferi was so badly over-matched in terms of size and talent that he just gave up without Fury doing much of anything to make him quit. That’s why it was important that Fury get in some rounds against Pianeta because he needed as many as possible to get him ready to take on WBC champion Wilder in November in a fight that is expected to take place in Las Vegas, Nevada.

Fury did a little showboating against Pianeta last night, with sometimes grabbing the ropes with one hand and looking to land shots. It would have made Fury look better if he was facing a better opponent than Pianeta, who was just awful. As I mentioned in previous article, retired 42-year-old Wladimir Klitschko could have come out of retirement last Saturday night and knocked Pianeta out and likely Fury as well. Pianeta looked completely shot from the fighter he was years ago when he fought Wladimir in 2012.

“We are two men who will fight anybody,” said Fury about Wilder. “They called. I answered. I said ‘send me a contract’. They sent me a contract. I said ‘yes’ and now he gets his chance to fight the lineal heavyweight champion of the world. One thing I promise when I go to Las Vegas, I’m knocking you out.”

It’s incredibly brave on Fury’s part to take on a dangerous puncher like Wilder at this point of his comeback. What’s interesting is Fury is doing roughly the same thing that Muhammad Ali did when he returned to the ring after a three-year period out of the ring to face WBA/WBC heavyweight champion Joe Frazier on March 8, 1971. It ended badly for Ali in losing by a 15 round unanimous decision against Frazier in a highly competitive fight. Before that contest, Ali had fought two comeback fights in beating Jerry Quarry and Oscar Bonavena by knockout. Ali wasn’t interested in taking more tune-up fights before facing Frazier; even though he would have been better off had he done so. Ali took the fight with Frazier anyway and ended up losing. Fury is doing the same thing Ali did. Of course, Ali didn’t let his weight get out of control during his three years out of the ring from 1967 to 1970 the way that Fury let his weight go. Fury’s job has been a lot harder than Ali, because he’s had to take off over 100 pounds of fat. Further, Fury had never established himself as the best heavyweight in the division before he took his 2 ½ year layoff from boxing. When Ali stopped fighting in 1967, he was clearly the best heavyweight in the division. We don’t know how good Fury was in 2015. All we know is he beat a mentally shot looking Klitschko by a close 12 round decision. Fury didn’t stick around to face Klitschko in a rematch, and he didn’t face Wilder or Joshua back then. Perhaps Fury would have beaten all three of them, but unfortunately we’ll never know. It’s up to Fury now to prove that he can beat Wilder and eventually Joshua if that fight can get made. 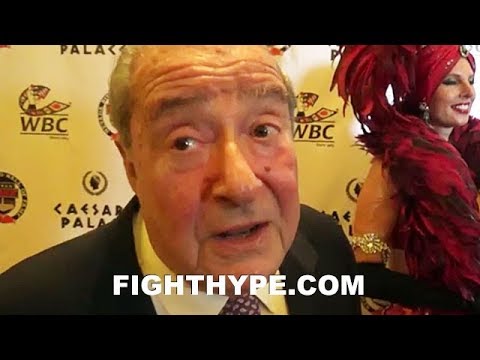 Could history repeat itself for Tyson Fury? »