Could history repeat itself for Tyson Fury? 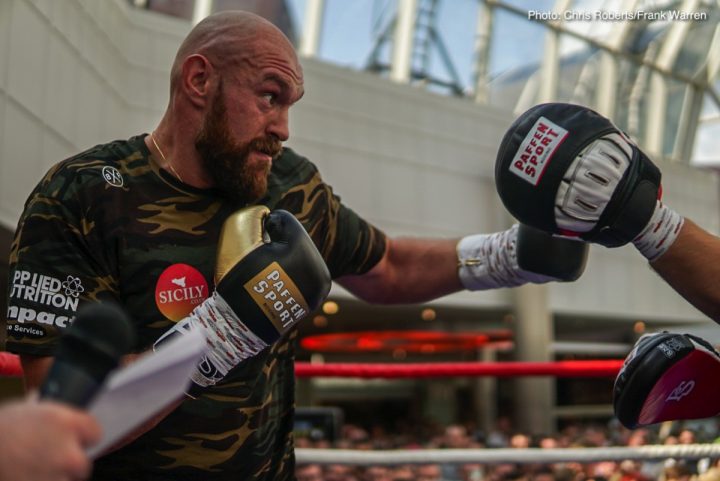 By Gav Duthie: Whether he knows it or not Tyson Fury is following the exact same path as past legends on a comeback trail. Much like Fury, Muhammad Ali and Mike Tyson missed 3 years before making unsuccessful comebacks when they stepped up in class. Tyson Fury is set to face WBC heavyweight champion Deontay Wilder later in the year much the same as Ali faced Joe Frazier and Mike Tyson faced Evander Holyfield after only a few comeback fights. Should Fury be looking at stepping up to an interim level like Manuel Charr or Kubrat Pulev before facing Joshua or Wilder? At the end of the day it looks like he is set to face Wilder so can he win?

Since Fury’s hiatus Deontay Wilder has knocked out 5 opponents in Artur Spiltzka, Chris Arreola, Gerald Washington, Bermaine Stiverne in a rematch and Luis Ortiz. Fury’s two wins are well off this level so cannot take this fight lightly.

In the three years Muhammad Ali had his license suspended for failing to go to the Vietnam war Joe Frazier fought 11 times collecting both the WBC and WBA titles along the way. When Ali returned he wanted his titles back of course whick, like Fury, he had never lost in the ring. Ali faced Oscar Bonavena in his first fight back. Ali is on record as the only man to ever stop Bonavena with 3 knock downs in round 15. That doesn’t tell the full story though because he performed nowhere near his best. He then beat Jerry Quarry on cuts. His hand speed was there in this fight but not so much the foot work. After that he felt he was ready for Frazier, he wasn’t. The Frazier-Ali fight dubbed ‘Fight of the century’ reminds me a little bit of Whyte-Parker. This fight was on a much higher level of course but the principles of one guy (Frazier) doing everything to win against a guy who wasn’t ready to dig deep but boxed really well at times. Frazier was an animal that night and although Ali did some good things he just wasn’t battle ready. Of course in the subsequent years Ali proved himself time and time again.

When Tyson was in jail for rape he missed a large part of his prime years in boxing. During this time Evander Holyfield fought 8 times but in fairness he lost 3 of them. He dropped two defeats to Riddock Bowe but beat him once and lost to Michael Moorer. Tyson fought 4 times before his defeat to Holyfield. He fought two easy contests against McNeeley and Mathis Jnr and picked up titles over Bruno in a difficult rematch and Bruce Seldon. Holyfield was actually a massive underdog because of a very below par performance in defeating Bobby Czyz. Tyson however didn’t seem ready to go the distance with Holyfield. Despite the losses Evander had been mixing it with top opposition and was motivated. Holyfield went on to stop Tyson in 11 rounds.

The pace Fury has been fighting against Sefer Seferi and Pianeta will not prepare him for Wilder. For anyone who thinks he can just walk and twist round the ring against ‘The Bronze Bomber’ like he did against Klitschko are in for a shock. I think it is too early at this stage for Fury to beat Wilder and think he could get knocked out or outworked if he faces Wilder now. It’s just too early.


« Arum says Wilder vs. Fury much bigger than Joshua-Povetkin