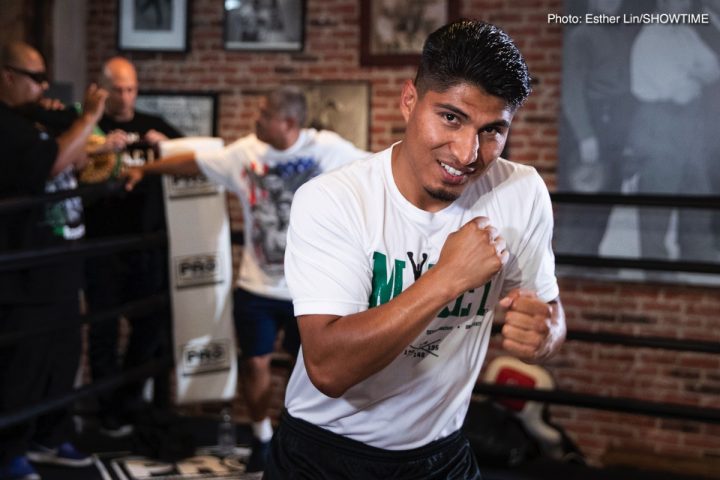 Mikey, 30, says if he comes out on top against Easter Jr. on Saturday, the match that he wants is against Spence Jr. a welterweight. Of course, the boxing world believes Mikey is just blowing smoke because it’s such a drastic move to go up two weight classes. Although Garcia did recently move up to light welterweight to defeat IBF 140-pound champion Sergey Lipinets to take his title, I was a hard fight for him and he took a lot of heavy punishment against the Belarusian fighter. Mikey was badly lumped up by Lipinets and he looked like the loser of the encounter. Lipinets’ face was unmarked, and he wasn’t bothered by the shots from Mikey. It was obvious to all that watched the fight that Mikey’s punching power didn’t carry up from the lightweight division.

“I’m very serious,” Garcia said to ESPN.com about his desire to fight the 28-year-old Spence Jr. “I know sometimes people don’t take me seriously. They think I’m just big talk [and that] I’m not ready for that, I’m too small, I’m not big enough for that kind of guy. He’s too much of a threat.”

One of the reasons why the boxing public doesn’t take Garcia seriously when he talks about wanting to move up to 147 to challenge Spence for his IBF title is because when he moved up to 140, he took on a weaker champion in that weight class instead of WBC belt holder Jose Ramirez. It looked like a cherry-picking move by Mikey in facing Lipinets instead of Ramirez or Regis Prograis. Mikey could have fought Terence Crawford when he held all four titles at 140, but he chose not to.

Mikey talked about wanting to fight Miguel Cotto in the past, and that fight never happened. It looks to some boxing fans that Mikey is just trying to get attention from fans on his unification fight against Easter Jr. by name dropping Spence’s name to make them believe that he’ll fight him next. If Mikey is truly serious about wanting to fight Spence next, then he doesn’t need to talk about the fight right now because it just makes him look like he’s trying to get badly needed attention to his fight with Easter, who the fans aren’t too excited about. The time for Mikey to start talking up a fight against Spence is AFTER his match against Easter, not before. The fans don’t seem to be buying what Mikey is saying about him wanting to fight Spence. It makes Mikey sound like the boy that cried wolf. The fans don’t believe him because he hasn’t been particularly courageous in his match-making he’s done in the past when he moved up to 140.

”I know I’m not big and I’m not at the size I should be to go to welterweight,” Garcia said. ”I know it’s a huge threat. I know it’s a dangerous fight for me. But those are all the reasons I want to do it.”

Mikey, 5’6”, would be giving away three and a half inches in height and four inches in reach to the 5’9 ½” Spence if the two of them wind up facing each other next in 2018. To be sure, Mikey will be giving away a lot more height and reach against the 5’11” Easter Jr. on Saturday, but he’s not nearly the same kind of puncher that Spence is. Easter Jr. will be enjoying an eight inch reach and five inch height advantage over

Mikey. However, Easter Jr. isn’t nearly the same kind of puncher that Spence Jr. is, and he’s not nearly as rugged as him. Easter Jr. won’t be able to walk Mikey down and punch his lights out in the same way that Spence can and likely will do if he winds up facing the Oxnard, California native. Easter Jr. is more of a volume puncher rather than a puncher like Spence. So for Easter Jr. to beat Mikey, he’s going to need to stand in front of him and throw a lot of punches on Saturday. Spence would be able to walk Mikey down and wear him down with body and head shots. That fight could turn out to be a real massacre in favor of Spence if Mikey makes the decision to face him rather than just talking about it all the time like he’s doing now.

Garcia has previously captured world titles at 126, 130, 135 and 140. To win those titles, Mikey beat the following fighters: Orlando Salido (WBO featherweight title), Ramon Martinez (WBO super featherweight title), Dejan Zlaticanin (WBC lightweight title), Adrien Broner (WBC Diamond light welterweight title) and Sergey Lipinets (IBF light welterweight title). Those guys are not in the same division as Spence, and they’re not in his class talent-wise. Mikey has won a lot of titles, but he’s done it against beatable opposition and never against the best. In facing Spence, Mikey would be faing the best in the welterweight division and it would be bad for him to take that fight without at least taking on some of the other top welterweights in the division like Danny Garcia, Shawn Porter, Terence Crawford, Andre Berto, Manny Pacquiao, Luas Matthysse and Jessie Vargas.

I mentioned some flawed welterweights in that bunch, but it’s unclear whether Mikey could hang even with them. A fighter like Matthysse would be dangerous for Mikey if he couldn’t hurt him with his power shots. If Mathysse were allowed to hang around against Mikey, he’d hit him with something big sooner or later and possibly hurt him. Mikey should at least get his feet wet at welterweight before taking on a dangerous puncher like Spence because at least the boxing fans would be able to get excited about him being in the 147-pound weight division. It would be more believable what Mikey says about wanting Spence.

Spence is looking very hard to beat right now with his recent knockout wins over Carlos Ocampo, Lamont Peterson, Kell Brook, Leonard Bundu and Chris Algieri. The win over Brook was especially impressive for Spence because he walked through a very good fighter and forced him to quit in the 11th round in front of his own boxing fans last year in May in Sheffield, England.