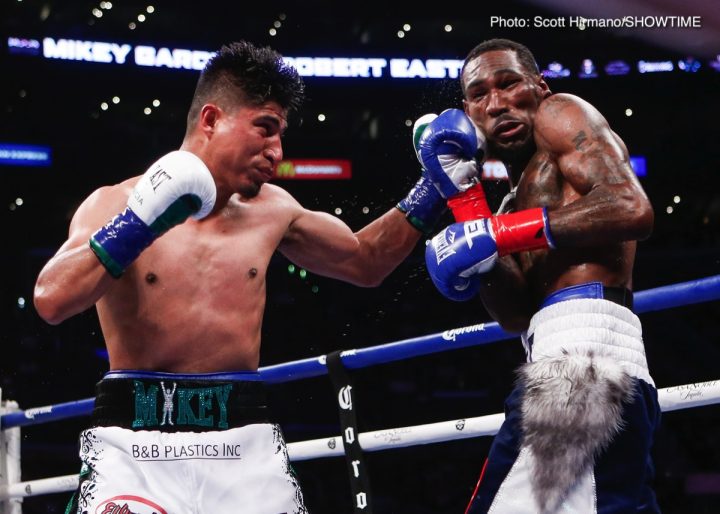 By Allan Fox: Former heavyweight world champion George Foreman says lightweight Mikey Garcia has a chance at beating IBF welterweight champion Errol Spence Jr. if the two of them face each other in November or December.

Garcia (39-0, 30 KOs) will need to move up in weight two divisions from 135 to 147 pounds to challenge Spence for his IBF welterweight crown. Foreman points out that boxing great Sugar Ray Robinson started his pro career at lightweight, and he eventually moved up to middleweight to win a world title. In Garcia’s case, he started his career out at featherweight in 2006, and he’s won world titles at 126, 130, 135 and 140. However, it appears that Garcia has gone as far as his 5’6” small body size will allow him to in capturing the IBF light welterweight title last March against arguably the weakest of the 140-pound champions in Sergey Lipinets.

Mikey didn’t face the likes of Regis Prograis, Josh Taylor or Jose Ramirez. Those would have been very hard fights for Mikey, and the wheels might have come off against those guys. Mikey going up to welterweight to face Spence could prove to be asking the impossible of him. Even with the generous scoring that we saw for Mikey in his fight against Lipinets, he doesn’t figure to be still standing at the end of the fight against Spence. The judges will likely be taken out of the equation by Spence.

”Some of the best welterweights ever moved up from the Lightweight. Robinson even made a great middleweight. Mikey can do it as well,” Foreman said to Kevin Iole of Yahoo Sports News on social media.

WBC lightweight champion Mikey Garcia, 30, defeated IBF belt holder Robert Easter Jr. (21-1, 14 KOs) by a 12 round unanimous decision last Saturday night in a unification fight at the Staples Center in Los Angeles, California. Garcia called out Errol Spence Jr. immediately after the fight. It was a brave thing to do for Garcia, but he has no choice. He’s at a roadblock right now if he stays at lightweight waiting for Vasyl Lomachenko’s promoter Bob Arum to put the unification fight together. Lomachenko fights on ESPN; whereas Mikey fights on Showtime. That in itself may prove to make a fight between them all but impossible.

The win proved that Garcia is one of the two best fighters in the 135-pound weight class. Garcia and WBA champion Vasyl Lomachenko stand above the pack at lightweight. However, Mikey hasn’t proven that he’s the best 140-pound fighter. To do that, Mikey would need to defeat the winner of the World Boxing Super Series light welterweight tournament as well as WBC champion Jose Ramirez and WBO belt holder Maurice Hooker. Garcia can possibly beat Hooker and Ramirez, but it’ll be asking a lot of him to try and tackle Prograis and Josh Taylor.

Former IBF welterweight champion Shawn Porter believes that Mikey should move to 140 and try his hand at fighting the best in that weight class before thinking of moving up to 147 to take on Spence. Mikey has only two fights under his belt at 140, and those were against Sergey Lipinets and Adrien Broner. Those guys aren’t in the same league talent-wise as light welterweights Josh Taylor, Regis Prograis or Jose Ramirez in my estimation. Garcia gave up his IBF 140lb title after being ordered by the International Boxing Federation to defend it against mandatory challenger Ivan Baranchyk. That would have been a draining fight for Garcia, as the 25-year-old Baranchyk can punch and he’s young.

“Mikey is a great fighter, but I think he should try 140-pounds for a while,” Shawn Porter said to Yahoo Sports News.

A lot of boxing fans would agree with Porter about the small 5’6” Garcia needing to test himself against the best at light welterweight before moving up to welterweight to take on Spence for his IBF title. Spence rehydrates to close to 170 pounds for his fights at welterweight. Mikey rehydrates to the low 150s. Garcia is not going to be able to bulk up and put on 20 pounds of usable muscle weight in the next four months for the Spence fight. Garcia might be able to gain a lot of weight, but it would be mostly fat. It’s not possible to gain 15 to 20 pounds of real muscle weight in only four months.

2012 U.S Olympian Spence, 5’9 ½”, is naturally bigger, stronger and of course more suited to the welterweight division than Garcia. Spence is also very smart, and he’s not going to be out-boxed by Garcia the way that Lipinets was last March. Garcia has other options at lightweight. He doesn’t need to risk his neck moving up two weight classes to face Spence at welterweight if he doesn’t want to. Garcia can always wait on a unification fight at WBA lightweight champion Vasyl Lomachenko in 2019. The fight isn’t possible for 2018, as the Ukrainian is coming off of a shoulder injury and will be facing WBO lightweight champion Ray Beltran in November or December. Like Lomachenko, Beltran is with Top Rank as well, and the promoter for the company Bob Arum wants to match those two together.

This will be a huge departure for Garcia in moving up to welterweight to face Spence, as he’s viewed as the very best fighter in the division by boxing fans. Garcia didn’t do that when he moved up to 140. He fought Lipinets and Broner, both of whom are flawed fighters. It would be better if Garcia moved up to 147 and first tried his hand at fighting the likes of Porter, Danny Garcia, Amir Khan or Manny Pacquiao. If Garcia could beat those types of fighters, then it would make sense for him to step up and face Spence.

Garcia wouldn’t have the built in excuse in losing to those guys that he would in getting beaten by Spence. Since none of those fighters are considered No.1 at 147, Mikey would be criticized by the boxing public if he was beaten by them. Losing to Spence wouldn’t be viewed as such a bad thing for Garcia’s career. The blowback from a loss to Spence wouldn’t be nearly as harmful to Mikey Garcia’s pro career as a loss to the other welterweights. That’s what this fight is all about. Mikey has less to lose in getting beaten by Spence as he would if he lost to the likes of Danny Garcia, Porter, Amir Khan or Keith Thurman.

Spence, 28, is already being called a ‘weight bully’ by boxing fans ahead of a fight against Mikey, as they see the match as a size mismatch. Spence will be so much taller, heavier and more powerful than Garcia. Spence will enjoy a 3 ½ inch height and 4 inch reach advantage over Garcia when the two of them face each other. The 5’6” Garcia was able to get in range of the taller 5’11” Robert Easter Jr. to land his power shots last Saturday night to defeat him by a 12 round unanimous decision. However, Garcia was hit an awful lost by the light-hitting Easter in that fight, and it was far from an easy fight for him. If Spence is able to land those same shots on Garcia, it’s not going to be pretty for him.

Mikey’s father Eduardo Garcia thinks it’s a bad idea for him to move up to 147 to face Spence. Further, Mikey’s brother/trainer Robert Garcia also doesn’t like the idea of him moving up to welterweight to take the fight with Spence as well. Mikey is perhaps drunk on success, as he’s never lost a fight yet, so he doesn’t have the same governor holding him back that other fighters would have that have stepped it up and tasted defeat. Part of the problem that is giving Garcia unreal confidence is the match-making that’s been done for him. If Mikey had been matched against the best fighters Vasyl Lomachenko, Gervonta Davis, Oscar Valdez, Gary Russell Jr., Regis Prograis and Josh Taylor, he’d be less eager to step it up against Spence.

Garcia might be better than Spence in terms of technical boxing skills, but he’s giving up so much size and punching power in this fight. As the saying goes, ‘a good big man beats a good small man.’ I think that’s going to be the case here. Spence is simply too big for Garcia, and it doesn’t matter that he doesn’t have the same speed or skills. Spence will likely bludgeon Garcia into submission the way that he did Lamont Peterson. It’s unclear whether Garcia could even beat Peterson. That would be a very hard fight for Garcia to take on Peterson.