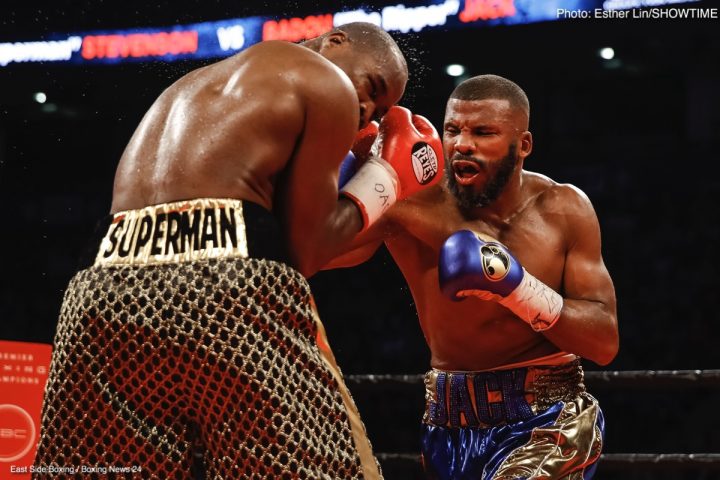 By Jeff Aranow: Badou Jack (21-1-4, 13 KOs) is probably going to need to wait a little for his rematch against WBC light heavyweight champion Adonis Stevenson (29-1-1, 24 KOs), because he has a mandatory defense that is due against Oleksandr Gvozdyk (15-0, 12 KOs).

Stevenson, 40, and Jack fought to a 12 round draw 10 days ago on May 19 in a thrilling fight at the Air Canada Centre in Montreal, Canada. While the boxing public wants to see Stevenson and Jack do it again in a second fight, Gvozdyk is the mandatory and he and his manager Egis Klimis want their title shot.

Gvozdyk’s manager Egis Klimas told ESPN that he was notified by the WBC that his fighter Oleksandr will be the next opponent for Stevenson. Klimas doesn’t intend on rolling over and letting Stevenson bypass Gvozdyk in favor of a second fight against the 34-year-old Badou. He’s going to insist on taking the fight.

It’s a good idea for Gvozdyk put his foot down and insist that he be next for Stevenson, because the years have a way of slipping by for the many contenders waiting in line and they may never get a shot against Canadian based fighter. Jack wasn’t ranked in the WBC’s top 15 until recently, and then he was pushed to the very top of the rankings for the sanctioning body at 175. Gvozdyk probably didn’t feel pleased at seeing Badou get a title shot while he was ignored. A rematch between Stevenson and Jack would make things worse for Gvozdyk, because he would likely need to wait another six months before that fight takes place, and you never know if there will be a demand for a third fight.

Eleider Alvarez finally gave up on waiting on his title shot against Stevenson after the WBC ordered him to fight Gvozdyk in an eliminator after he’d already been the mandatory challenger. Alvarez instead chose to take a fight against WBO light heavyweight champion Sergey ‘Krusher’ Kovalev, who is more than willing to fight him rather than pay him to step aside the way Stevenson did.

Alvarez was the only good fighter that came along in five years, and Stevenson paid him off to step aside. It’s partially Alvarez’s fault for accepting the step aside payment, because he would have been better off if he’d fought Stevenson and beaten him. I’m not sure whether Alvarez believed he could win. Why else would he agree to a step aside fee? If you believe you can win, you’re not going to want to take a step aside feel, because you can make more money after you become a champion.

It’s going to be interesting to see if the WBC allows Stevenson to bypass Gvozdyk and take the rematch with Badou. I’m sure that if the WBC does this, they’ll guarantee Gvozdyk a shot against Stevenson next, but there’s no upside for him to wait. If Stevenson loses to Badou, then Gvozdyk will get an arguably less popular fighter to face and a younger one at that. Gvozdyk gains more by fighting Stevenson and proving he can beat the longtime champion than if he defeats Jack, who seems to slack off half the time in his fights, which is why he has so many draws. Jack doesn’t fight hard for the full 12 rounds. He tends to fight hard in the second half of his fights when things looking bad for him.

For Gvozdyk to beat Stevenson, he’s going to need to be able to push a fast pace for the entire fight, and he’ll have to take a lot of heavy shots the way that Jack did. I honestly don’t think Gvozdyk has a good enough chin to withstand the big bombs that Stevenson will be hitting him with in the first six rounds. Gvozdyk was badly hurt by Tommy Karpency and Mehdi Amara in those fights, and those guys don’t hit as hard as Stevenson. Moreover, Gvozdyk doesn’t fight at a fast-enough pace to tire out Stevenson. If Gvozdyk fights at a slow pace on the outside all night, Stevenson is going to eat him up with his power shots.

The way WBC president Mauricio Sulaiman is talking, Stevenson will be fighting Jack in the rematch next rather than Gvozdyk.