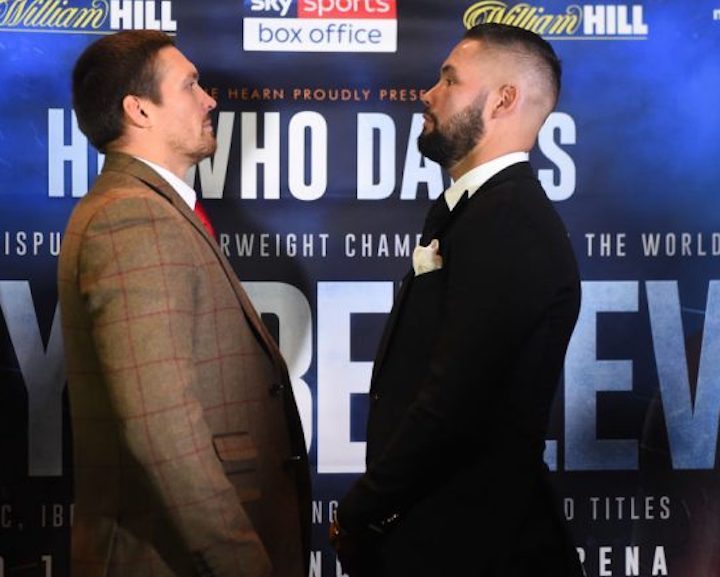 By Scott Gilfoid: Adonis Stevenson (29-1-1, 24 KOs) says he’ll move up to cruiserweight to face Tony Bellew (30-2-1, 20 KOs) in a rematch if he is successful at defeating IBF/WBA/WBC/WBO champion Oleksandr Usyk (15-0, 11 KOs) this Saturday night at the Manchester Arena in Manchester, England.

Stevenson destroyed Bellew by a 6th round knockout five years ago in November 2013 in his only mandatory defense of his WBC 175 lb title.

Stevenson, 41, has his own fight that he needs to win as well before he can start talking about a rematch against Bellew. Stevenson will be defending against his mandatory Oleksandr Gvozdyk (15-0, 12 KOs) on December 1 at the Centre Videotron in Quebec City, Quebec, Canada. That’s not a clear cut win for Stevenson. Gvozdyk, 31, is 10 years younger than Stevenson, and looking hard to beat at this point in his career. Gvozdyk is catching Stevenson at the right time in his career with him coming off of a grueling 12 round draw against Badou Jack last May in Toronto, Canada. Never mind that many boxing fans felt Stevenson did enough to deserve the victory over Jack, it was still a very hard fight for him that saw him take a lot of punishment for the first time in his 12-year pro career. If Stevenson is depleted from that fight, it gives Gvozdyk a good chance of unseating him. It’s still unlikely to happen though, as Gvozdyk is inexperienced as a pro and is taking a big step up in class from the guys he’s been facing. Gvozyk has a chin problem, and he’ll be facing the faster, stronger and more experienced fighter in Stevenson. On top of that, Gvozdyk will need to figure out Stevenson’s southpaw style, and that’s not going to be easy to do.

“I don’t have anything against Bellew but I do know he always talks ****, though,” Stevenson said to skysports.com. “I would like it if he wins. If he does win, I can fight him up at cruiserweight and beat him as a cruiserweight for the titles.”

It’s too bad Bellew is likely going to lose to Usyk, because a rematch between him and Stevenson would be a fun fight to watch. It would give the boxing fans a chance to see whether Bellew’s excuses for his loss to Stevenson about being drained and not fighting in the right division were correct. Bellew had a chance to fight Stevenson in the past to try and avenge his loss, but he’s never showed much inspiration to do that. Moreover, Bellew’s promoter Eddie Hearn of Matchroom Boxing, who does all the match-making for him, has never shown the desire to put him back in with Stevenson. What this means is that even if Bellew does somehow get a miracle win over Usyk on Saturday night, he’s likely not going to make an attempt to face Stevenson in a rematch. As we saw in 2013, Stevenson is all wrong for Bellew. Stevenson is faster, stronger, more athletic and more rugged than Bellew. Stevenson took Bellew’s best shots in the first five rounds before getting serious and knocking hm out in the 6th.

Stevenson will give Bellew the handicap that he needs by moving up to cruiserweight without asking for a catchweight to bridge the gap from 175 to 200 lbs. In other words, Stevenson will be moving up a full 25 lbs to face Bellew at cruiserweight if he beats Usyk on Saturday and IF he wants the fight against him. Bellew hasn’t mentioned wanting to fight Stevenson if he beats Usyk. The only thing Bellew has talked about is wanting to retire from boxing, win or lose. Of course, Hearn is going to have something to say about that.

It’s impossible to imagine Hearn letting Bellew end his career without throwing him bac in the ring with Usyk for at least one if not two more fights. Hearn can’t let Bellew retire off of a win over Usyk, who he now promotes, as he arguably needs the Ukrainian to beat Usyk for him to be a reasonable option for a fight against IBF/WBA/WBO heavyweight champion Anthony Joshua in 2020 or 2021. If Bellew beats Usyk and then retires and stays retired, then it’s going to be much tougher for Hearn to sell a fight between the 2012 Olympic gold medalist and Joshua. Hearn might need to offer Bellew HUGE money to get him to come back and face Usyk in a rematch. But this is all conjecture. Bellew still needs to beat Usyk, and Stevenson needs to defeat Gvozdyk for the possibility of a Bellew-Stevenson 2 rematch to have a chance of taking place.

Bellew has been beaten twice during his career in losses to Nathan Cleverly and Stevenson. Some boxing fans think Bellew deserved a couple of losses to Isaac Chilemba as well, but that’s a matter of opinion. It sure looked like Bellew lost both fights to Chilemba, but the judges opted not to score it against him. The way that Stevenson beat Bellew was like watching a slaughter. Bellew was completely over-matched from star to finish. It was a total rout. After the trash talking that Bellew had done in the lead up to the fight, boxing fans were believing that Stevenson had little chance of winning. But as soon as the action started, it was clear that Bellew didn’t belong inside the same ring with the far more talented Stevenson. Bellew was getting hit with lefts, rights, you name it, and looking like a punching bag with arms. It’s a miracle that Bellew made it to the 6th round, as he was just getting pelted with shots repeatedly by Stevenson.

Stevenson says he would like to fight at a catchweight against Bellew if he wins the four titles from Usyk. As mentioned already, the chances of that happening aren’t good. Bellew will very likely be dragged out of retirement by Hearn and thrown back into the ring with Usyk for a rematch. Usyk will need to beat Bellew for him to move forward to an eventual fight against Joshua. If by chance Bellew does decide to give Stevenson a rematch, he’s likely going to use his A-side power by insisting the fight takes place at the full weight for the cruiserweight division, and make sure the fight is fought in the UK. Stevenson probably won’t have a problem with either if it means he an get the rematch with Bellew.

Mayweather: McGregor won’t make the same money fighting Pacquiao as he did with me497 Total Shares
Subscribe (Free!)
Search