Dmitry Bivol vs. Isaac Chilemba possible for Aug.4 on HBO 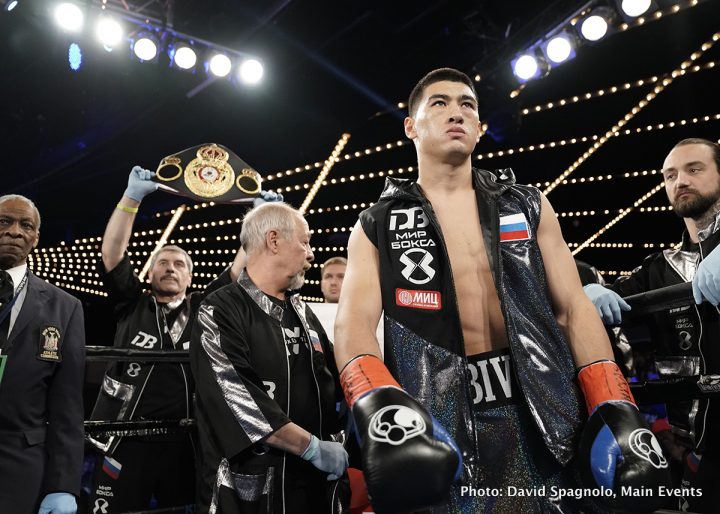 By Allan Fox: WBA World light heavyweight champion Dmitry Bivol (13-0, 11 KOs) could be making his next defense against the struggling 31-year-old former world title challenger Isaac Chilemba (25-5-2, 10 KOs) on August 4 on HBO, according to Dan Rafael.

If the Bivol-Chilemba fight gets made, it’ll be the co-feature bout on the Sergey ‘Krusher’ Kovalev vs. Eleider Alvarez card at the Hard Rock Hotel in Atlantic City, New Jersey. Bivol fought on the undercard of Kovalev’s last fight against Igor Mikhalkin on HBO on March 3 at Madison Square Garden in New York. Bivol easily beat Sullivan Barrera.

”Chilemba is one of the possible opponents for Bivol,” Bivol’s manager Vadim Kornilov said to Dan Rafael of ESPN.com. “We will know for sure in the next couple of days.”

Bivol might be the best fighter in the 175lb division today, which is why it’s a little disappointing to see him fighting Chilemba rather than one of the top contenders like Anthony Yarde, Marcus Browne, Joe Smith Jr. or Badou Jack.

Chilemba is not what boxing fans were hoping to see the 27-year-old Bivol fight next. Chilemba is ranked #12 with the World Boxing Association, and he’s lost three of his last four fights since 2015. Granted, Chilemba’s losses have come against good fighters in Oleksandr Gvozdyk, Sergey Kovalev and Eleider Alvarez.

Chilmba’s performances seem to be getting worse with each fight. Against Gvozdyk in November 2016, Chilemba was dominated the entire fight and eventually had to quit in the 8th round due to a broken hand. In Chilemba’s last fight, he barely squeaked by former light heavyweight world title challenger Blake Caparello (26-3-1, 10 KOs) in defeating him by a 12 round unanimous decision last Marc by the scores 117-111, 115-113 and 115-113.

Chilemba was born in Malawi and he currently lives in Johannesburg, South Africa. Chilemba’s best wins of his 13-year pro career have come against these fighters:

Chilemba has three fights on his resume that he arguably won in his first fight against Tony Bellew, Thomas Oosthuizen, and Eleider Alvarez. Some boxing fans believe that Chilemba deserve a victory in both of his fights against Bellew, which took place in the UK. Chilemba was landing the better shots throughout both fights, but the judges that worked those fights felt Bellew did enough keep from getting beaten. Chilemba gave Kovalev major headaches in their fight in July 2016 in losing a 12 round unanimous decision in Ekaterinburg, Russia. Chilemba came on strong in the second half of the fight when he wore Kovalev down with his pressure.

This will be Bivol’s third defense of his WBA 175lb title that he won outside of the ring in 2017. In Bivol’s prior two defenses, he stopped fringe contender Trent Broadhurst in the 1st round last November, and then he beat Sullivan Barrera by a 12th round knockout last March.