Adonis Stevenson: “I’m going to catch him [Gvozdyk] and the night will be over” 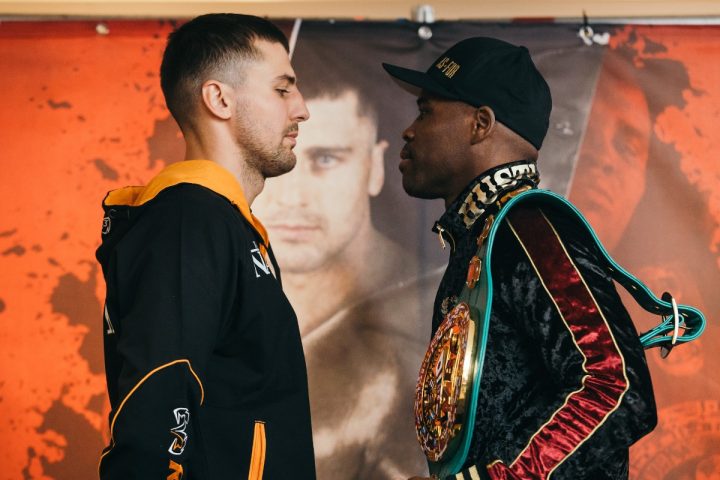 By Mike Smith: WBC light heavyweight champion Adonis ‘Superman’ Stevenson (29-1-1, 24 KOs) says he’s going to be looking for a knockout this Saturday night when he defends his title against his mandatory challenger Oleksander Gvozyk (15-0, 12 KOs) at the Centre Videotron, Quebec City. Stevenson says he’s going to stalk the Ukrainian fighter around the ring until he catches him with one big shot that knocks him out. According to Stevenson, it’s going to take one big punch to KO Gvozdyk on Saturday night on Showtime Boxing. This will be Stevenson’s 10th defense of his World Boxing Council 175 lb title he won in 2013 with a 1st round knockout victory over Chad Dawson.

Stevenson-Gvozdy will be be shown live on Showtime and streamed free of charge on Sho Sports Youtube channel and Showtime Boxing Facebook page The start time is at 7:45 p.m. ET/PT. The fight will be shown before the Deontay Wilder vs. Tyson Fury card starts at 9:00 p.m. ET. on Showtime pay-per-view.

Stevenson, 41, is the underdog with the odds-makers, and he plans on proving them wrong by knocking out the 31-year-old Gvozdyk. If this fight had taken place before Stevenson fought Badou Jack last April, he’ like be a strong favorite to defeat Gvozdyk. The fact that Stevenson struggled so bad in fighting to a controversial 12 round draw against Jack, it has the bettors thinking that he’s lost a step and is now vulnerable to losing on Saturday night.

“I’m looking for the knockout. That’s just my mentality and the way that I train,” Stevenson said. “I know that if he makes a mistake, I’m going to catch him. He only has to slip up once in 12 rounds. One mistake, one punch. That’s all it’s going to take. I’m ready. I know I can punch and it’s 12 rounds. I just need one punch. Just one. I’m going to catch him and the night will be over.”

Stevenson has got a weaker-chinned fighter on his hands with Gvozyk. Although the Ukrainian fighter has youth, speed, size, power and technical boxing skills going for him, he’s slower than Adonis, and his punch resistance isn’t what it needs to be for him to win this fight. Gvozdyk’s ability to take a good shot is likely no better than past Stevenson knockout victims like Thomas Williams Jr., Andrzej Fonfara, Dmitry Sukhotskiy and Tony Bellew. Stevenson doesn’t knock everyone out though. There’s a rare bird that comes along every once in a while that is able to withstand his power, but it’s not often and they need to take a lot of punishment to see the final bell.

The only fighters that have been able to go the full 12 rounds against Stevenson n the last five years have been Sakio Bika, Badou Jack and Fonfara. Stevenson probably would have knocked Jack out if he’d been willing to stand and fight in the first six rounds. Jack wanted no part of slugging with Stevenson in rounds one through six, so he gave the rounds up by default. Jack should have lost the fight to Stevenson last April, but the judges gave Badou a lot of rounds where he wasn’t doing anything.

“In the words of my old trainer, Emanuel Steward, ‘knockouts sell’ and that’s what I’m going for in this fight,” Stevenson said.

The late Emmanuel Steward always believed that Stevenson was destined to become a world champion. Unfortunately, Steward passed away in October 2012, eight months before Stevenson captured the WBC 175 lb title in June of 2013. A lot has happened since then, as Stevenson is now the longest reining champion in boxing, and he’s about to make his 10th defense of his title against an unbeaten fighter that the sport is excited about in Gvozdyk. No one is saying that Gvozdyk is the best fighter in the light heavyweight division. The fans see Gvozdyk is one of the best, but not up there with Artur Beterbiev or Dmitry Bivol. Those guys would give Gvozdyk a lot of problems. The chances are high that Gvozdyk will be put in his place by Stevenson, like most of the other contenders that have challenged him in the last five years.

“People always ask about Stevenson’s age but George Foreman and Bernard Hopkins performed at a high level when they were 50-years-old,” Gvozdyk said.

Gvozdyk has the age wrong for Stevenson. He isn’t 50-years-old. He’s 41, and he’s wrong about George Foreman and Bernard Hopkins performing well at 50. Foreman was 48-years-old when he retired in 1997. Hopkins was not fighting at a high level at 50. Hopkins lost to Sergey Kovalev by a one-sided 12 round unanimous decision at age 49 in 2014, and then didn’t fight again until 2016, when he was stopped in the 8th round by Joe Smith Jr. That was the last time Hopkins fought.

Stevenson is 41, and he looks and is fighting someone 10 years younger than his chronological age. You can say that Stevenson and Gvozdyk are both the same age at 31. There’s no difference between them in terms of physical age, as far as this writer can see. Stevenson is faster, stronger and he has the better talent of the two. Gvozdyk is going to need to forget about Stevenson’s age, and focus on keeping his chin tucked on Saturday night.

If Gvzodyk is smart, he needs to just look at Stevenson as being the same guy that knocked Dawson out in the 1st round in 2013, cause if he doesn’t, he could suffer the same fate. Gvozdyk’s chin is no better than Dawson’s. He’s got a comparable weak chin, and that means he’s going to need to do everything he can to avoid getting hit. Stevenson has done his homework in studying Gvozdyk’s past fights. That’s why Stevenson keeps saying that it’s only going to take one punch for him to KO this guy, considering he knows how poor his punch resistance is. Gvozdyk was knocked down by journeyman Tommy Karpency and staggered by Mehdi Amar. Gvozdyk isn’t another Badou Jack in the chin or experience department. He’s a guy that hasn’t been matched tough by his promoters. They obviously that he’s got flaws.

Gvozdyk is trained by Teddy Atlas. That might be a weakness right there. Atlas is a good talker, but he’s not been able to do a lot as a trainer. If Atlas has Gvozdyk got straight at Stevenson on Saturday night instead of boxing him, it’s going to be an early night. You’d like to think that Atlas is smart enough to know that Gvozdyk doesn’t have the best beard, and won’t be able to stand and fight with Stevenson. Atlas might be under the mistaken belief that Stevenson is old, and he can be walked down the way Jack was doing in portions of the second half of their fight last May. Jack is arguably a much better fighter than Gvozdyk is. The shots that Stevenson was hitting Jack with would would likely be knockout blows if Gvozdyk is forced to tae those same blows on Saturday. Gvozdyk is going to need to get on his bike if he wants to survive the first six rounds. That’s when Stevenson at his most dangerous point. If Gvozdyk stands and fights Stevenson in rounds one through six, it’s going to be over with.