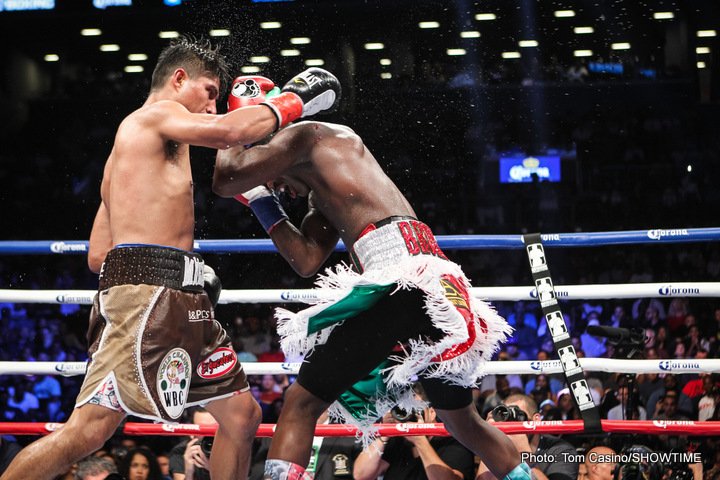 By Dan Ambrose: Mikey Garcia and Adrien Broner pulled in an average of 881,000 viewers with a peak of 937,000 viewers on Showtime Championship Boxing for their fight last Saturday night at the Barclays Center in Brooklyn, New York.

These are not the ratings that would suggest that the 29-year-old Garcia is ready to become a PPV star. He’s got a long way to go before he gets to the level where he can make the leap to PPV. Garcia said after the fight that he’s interested in fighting Floyd Mayweather Jr. if he continues his boxing career after he’s done with UFC star Conor McGregor in their fight on August 26 on Showtime PPV. We heard crazy numbers of $100 million for Mayweather talked about in a fight with Garcia. It’s pretty much impossible for that to happen. Mayweather vs. Garcia would be like Mayweather’s fight against Andre Berto, which pulled in a little 300,000 buys on Showtime PPV.

The fight was nowhere near as close as the scores. Broner appeared to win one round at best in the entire fight. It wasn’t a compelling fight compared to some of the fights that have been televised in 2017. Mikey fought in a conservative manner in doing just enough to win each round, but no more than that. It wasn’t nearly as good of a performance from Mikey as we saw from Marcos Maidana in his 12 round beat down of Broner on December 14, 2013. Maidana knocked Broner down twice in the fight in putting him down in round 2 and round 8, and he won by the scores 117-109, 116-109 and 115-110.

The co-feature bout last Saturday between unbeaten #2 WBC middleweight contender Jermall Charlo (26-0, 20 KOs) and the injured #1 WBC Jorge Sebastian Heiland (29-5-2, 16 KOs) averaged 500,000 viewers with a peak of 542,000 viewers. That fight was a real letdown due to Heiland suffering a leg injury at some point. Supposedly the injury occurred during the 1st round, but I don’t buy that. Heiland’s left leg didn’t look good even when the bell sounded to start the fight in round 1. The only thing you can say about the Charlo-Heiland fight is why it took Charlo 4 rounds to finally knock the one-legged Heiland out. Charlo should have been able to get him out of there a lot faster than he did. It wasn’t an interesting fight. Unfortunately, the only somewhat interesting match on the card was the heavyweight clash between unbeaten Jarrell Miller and Gerald Washington fight, but that fight didn’t make it on the televised portion of the Showtime Championship Boxing card. The Showtime viewers only saw the mismatches between Garcia and Broner and Charlo and Heiland. Neither of those fighters was competitive at all. I was just standard mismatches.

The 28-year-old Broner was supposed to fight a lot better than he did, but he looked weak, weight drained and afraid to mix it up with Garcia. Broner isn’t an old fighter, but he seems to be a different guy from the courageous fighter that fought Marcos Maidana earlier in his career. Broner was not willing to put his chin on the line against Garcia. He fought like he was just trying not to get hit. There was no way that Broner could beat a fighter like Garcia fighting the way he did because he didn’t possess the punching power to hurt him with the occasional punches he landed. If Broner had 1-punch power, then he would have done well throwing so few punches. At 140, Broner doesn’t hit hard enough to beat the better fighters with the way he fought Garcia.
The entire televised averaged 660,000 viewers.