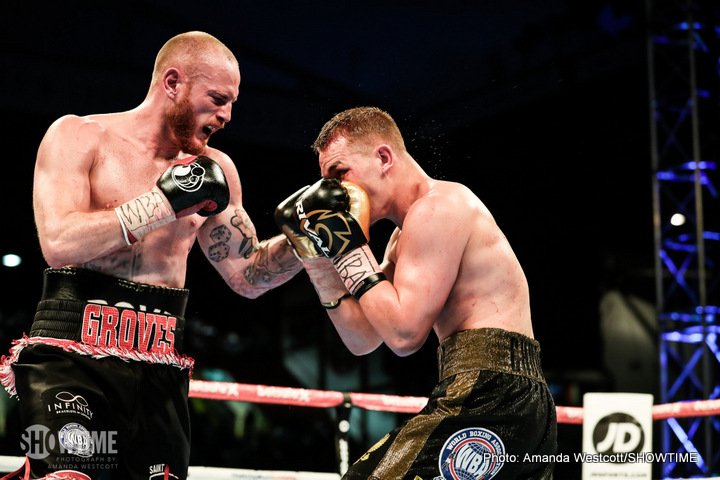 By Adam Godfrey: On the final weekend of May 2017 Great Britain gained a new World Champion, before promptly losing an established one. Hammersmith native George Groves finally won a World Title at the fourth attempt, defeating Russian Fedor Chudinov by 6th round TKO to clinch the vacant WBA Super-Middleweight strap. The belt was owned by Chudinov himself until 2016 whereupon he lost a controversial UD to German Felix Sturm; few had Sturm winning that fight, and accusations that Chudinov was robbed were well justified. Sturm would later fail a drugs test, further underlining the sense of injustice felt by the Russian’s team, again, justifiably so.

It could be argued that Chudinov should have been reinstated as the WBA’s Super Champion, but instead a fight was sanctioned between perennial runner-up Groves and a hard-done-by Chudinov. Groves himself carried an air of injustice about his career. He was beating Carl Froch in their first title fight before he was halted by a highly contentious stoppage, Froch’s reputation as a relentless brawler with an iron chin apparently outweighing Groves’ unfortunate sense of vulnerability. The second fight between the two was much more tactical, up until the point that he was wiped out by a beautifully targeted right by Froch, which despite eventual wobbly protestation, was correctly called a fight deciding blow.

Groves’ third attempt at becoming a world champion was against Sweden’s highly regarded operator and WBC titlist Badou Jack. Groves was knocked down early but rallied effectively to make the fight very competitive, Groves eventually on the losing end of a split decision. It was difficult to take for Groves, but ultimately a fair decision, Groves never doing enough to rip the belt from the Champ.

There are many examples in sport of an individual repeatedly failing at the very highest stage before eventually taking their chance, tennis player Andy Murray springing immediately to mind, the Scot having lost four grand slam finals before finally besting Novak Djokovic at the fifth attempt. George Groves ultimately went one better, finally achieving his career goal on Saturday 27th May 2017. Groves entered the ring full of energy and adrenaline, an indication perhaps that he knew he was entering last chance saloon; another opportunity to become World Champion would unlikely rear its head.

The fight was fast paced and exciting, Chudinov displaying contempt for Groves’ power punches in refusing to walk in any direction but forward. For his part Groves dealt well with the pressure and landed a few scoring punches himself, avoiding punishment at the same time. I had the fight a draw going into the sixth, whereupon Groves suddenly leapt into life, smashing Chudinov with 15 to 20 unanswered blows, prompting the ref to step in and halt the bout. Chudinov was steadfast but had given up throwing back and the ref absolutely did the right thing in protecting the Russian from himself, a telling blow in danger of knocking him out cold.

Upon winning, the enormity of a long-coveted achievement swept over Groves and his delight was clear. Passionate words from Groves in the direction of previously defeated and still struggling former foe Eduard Gutknecht added extra poignancy to the Englishman’s victory; the German suffered swelling on the brain in losing to Groves in November of last year, and, according to reports, can no longer walk or speak and is likely to be reliant on care for the rest of his life. Best of luck to Gutknecht and his recovery.

For Groves, the onus is on him to push his career forward and defend his belt promptly, and against game opposition. A rematch against James DeGale, a bitter domestic rival whose career took an upward trajectory compared to Groves’ despite losing to him in 2011, should be a PPV event in the UK and will either cement Groves’ dominance over the IBF Champion (and unify two belts, let’s not forget) or pave the way for a defining and lucrative trilogy fight between the two. The fight has some marinating in it, however, and both men may seek tune ups before meeting in the ring. Whoever unifies the belts will likely find themselves in the firing line of Mexican WBO Super-Middleweight champion Zurdo Ramirez who will relish being thrown in the mix with the two domestic rivals, and whose own destiny as a possible PPV star is on the line. 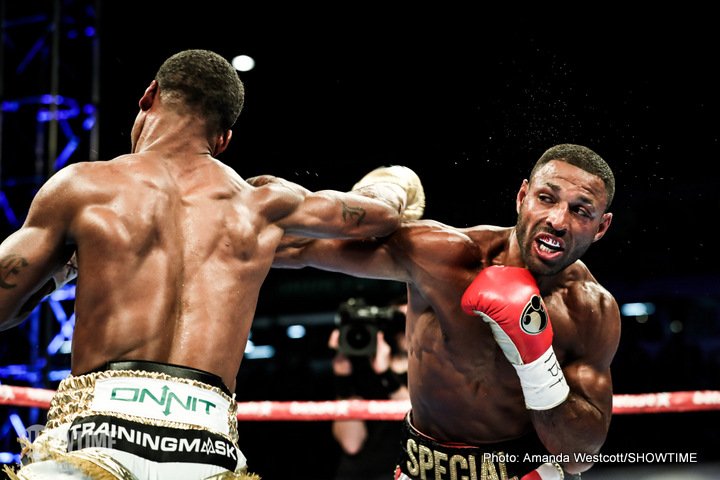 Onto the feature bout; Kell ‘Special K’ Brook versus Errol ‘The Truth’ Spence was a fight that many Boxing fans simply did not see happening, given the pounding that Brook took against Middleweight King Gennady Golovkin and Spence’s coveted punching power and all-around avoidability. Many thought that taking on the American so soon would be too big a risk for Brook. Others figured that Brook should vacate his IBF title and focus instead on moving up to the Junior Middleweight division, a weight category that appears to better suit Brook’s build and would be less of a challenge in terms of cutting weight, considering that Brook’s last fight was at 160 lb.

Nevertheless, Brook opted to take on his mandatory, and the world of Boxing is better off for it. Either Brook would firmly establish his position as one of the dominant Welterweights, or Spence would wrench the title away and begin a new legacy within Boxing’s glamour division. One way or another, Boxing would win.

The build-up was tense but not especially bitter, Brook insisting that the challenger was jumping up in competition too early, with Spence, on the other hand, pointing to his own skills and power as being superior to that of the Champion. Indeed, Spence went into the fight as the bookie’s favourite, which, at the time, was slightly baffling given both the quality of opponent and the location of the fight. One can assume that the bookmakers could not look past the potential lasting effects of Brook being knocked out by GGG and the nasty eye injury that followed. The blossoming reputation of Spence as a KO artist also inevitably entering the mindset of those who set the odds. For my own part, I slightly favored Brook, but refused to rule out any result, due to my admiration for the power and bravery of Spence and my ongoing support and admiration for Kell Brook.

Both men weighed in slightly below the 147 lb. limit, Brook marginally heavier. It’s difficult to say that either looked like they had particularly enjoyed making weight. While they did not look emaciated, each appeared as if they could have been more comfortable if 154 lb. was the aim of the weight cut, especially Brook, who is well-known to struggle to make the 147 lb. limit.

The fight was a difficult one to call in the first half. Brook managed to nullify the pressure put on him by Spence, and seemed to successfully upset the American’s rhythm. On occasion, he would become the aggressor and would push the American back, the swapping of roles only subtle, and neither man managed to land anything of huge significance for the first six round. Spence was occasionally ragged as Brook managed to win the battle of the jabs, and the former’s coveted punching power seemingly making little in-roads.

I had Brook winning a close fight by half-time, but it was from the seventh that the momentum of the fight seemed to shift in favor of the challenger. Up until that point Spence’s body-work was clean, but didn’t appear to be especially effective. Suddenly from the seventh, Brook seemed to tire quickly, and Spence took full advantage of his opportunity. Rounds seven and eight were the easiest to score by that point (and went to the American) and in round 9 Brook’s left eye, the one not broken by GGG, was clearly in bad shape and starting to close. Brook would periodically paw at it, and flashbacks of his grueling encounter with the Kazakh must surely have flashed before his eyes (or eye, as it were). In round 9 Brook understandably went on the run, and referee Howard Foster looked likely to step in at any second. Brook stumbled, and Spence hunted. Round 10 began even better for Spence and he managed to force Brook to take a knee, the first knockdown of the fight. Was it over? Was it hell. Brook managed to sum up all of his considerable will to not only survive, but to even swing the momentum of the round back into his own favor, throwing caution to the wind and smacking his opponent with some stiff shots, that were certainly felt. It was the best round of the fight, and summed up both the bravery of Kell Brook and the killer instinct of the soon to be new IBF Champion Spence.

By round 11, Brook’s left eye was ready to collapse, and the end was nigh. Brook started the round by landing a wicked uppercut, but one which did not hurt the challenger, and was an indication that this fight was winding down to an inevitable conclusion. Brook elected to take a knee as he was chased around the ring by Spence, worn down by the excellent body punching of the American and the damaged eye yet again inflicted upon him.

In Errol Spence, Boxing has a Champion unlikely to be fazed by any challenge put in front of him. Win or lose, one suspects that Errol Spence will be one of those fighters that cannot turn down a challenge, and fights against Keith Thurman, Danny Garcia or Lamont Peterson are surely in the near future. Even more outlandish opponents such as Manny Pacquaio, Timothy Bradley or Canelo Alvarez should not be completely discounted as the stock of Spence rises. His win against Brook was deserved, and he is a legitimate and exciting Champion.

As for Kell Brook, his star is arguably waning. Back to back losses, admittedly against stellar opponents, is very difficult to come back from. Combined with an arguably weak CV (Shawn Porter being the only real name on his resume) it is far from clear where he goes from here. He could very easily make 154lb. But there be demons. The Charlo twins would be huge challenges for Brook, and it is difficult to envisage him beating either without several tune ups first, which would diminish interest. Also lurking would be Demetrius Andrade, who is another it is difficult to see Brook beating while he is still relevant.

The elephant in the room goes by the name of Amir Khan. Real hatred exists between the pair from their amateur days, Khan claiming to have ‘battered’ Brook around the ring in sparring. But Khan’s status as a prizefighter is questionable; he has got through opposition at a snail’s pace in recent years, waiting eleven months between fighting Devon Alexander and Chris Algieri, another eleven between Algieri and Canelo Alvarez, and thus far 13 months between Canelo and where he is now, without a fight. Khan’s inflated opinion of himself and his status within Boxing may be the undoing on a potential fight between the two, as the British public’s appetite for the duo to meet diminishes in-line with Khan’s insistence that he is still relevant. If the fight is to be made, it needs to be made quickly while anybody still cares.

Overall, the Brook v Spence event was good fun, and produced more than its fair share of drama and suspense. A new star emerged in Errol Spence, and few would begrudge George Grove’s his finest moment to date. Brook’s career remains up in the air with both his health and future opponents unclear, but for Spence and Groves, the sky is the limit.


« Hearn: I told Brook to move to 154 BEFORE Spence fight