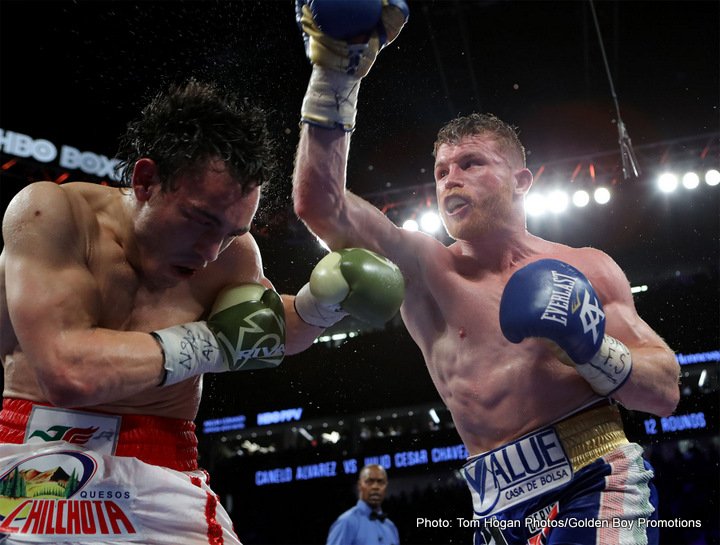 By Dan Ambrose: A weight drained looking Julio Cesar Chavez Jr. took a one-sided 12 round unanimous decision loss last Saturday night against Saul “Canelo” Alvarez in their big fight on the Mexican holiday Cinco de Mayo on HBO PPV. Chavez Jr. lost all 12 rounds, but was never hurt by the shorter Canelo at the T-Mobile Arena in Las Vegas, Nevada.

After the fight, Chavez Jr. was asked by the boxing media if Canelo is the best fighter he’s faced during his career, and he said, “I thought Sergio Martinez was better, but he [Canelo] is the best Mexican fighter at this point and time.”

In looking back at video of the Chavez Jr-Martinez fight from 2012, Martinez did look better beating Chavez Jr. compared to Canelo. That’s no put down of Canelo. You have to realize how good Martinez was back then. He was the best in the middleweight division, and a guy more height at 5’10 ½” and superior boxing skills and mobility than Canelo. Martinez was a bigger and faster fighter back than compared to Canelo.

Martinez made a prime Chavez Jr. look REALLY bad for the first 11 rounds until he got sloppy in the 12th round and dropped his guard and was knocked down. Chavez Jr. almost knocked Martinez out in the last round of that fight. But this wasn’t the clearly weight drained Chavez Jr. that we saw last night. Chavez Jr. was 25 when he fought Martinez, very strong, and a lot thicker looking. He wasn’t drained from a combination of a low calorie diet and lots of cardio activity that he had to do in order to drain down to the 164.5 pound catchweight for the Canelo fight.

Looking at the Martinez-Chavez Jr. fight, I think Martinez would have boxed Canelo’s head off last night if the 2012 version of “Marvilla” was inside the ring with the redheaded Mexican star last night instead of the badly depleted Chavez Jr. It wasn’t a fight last night because Chavez Jr. had left his best behind in training camp in having to shed a TON of weight to get down to the 164.5 lb. catchweight limit. This kind of thing happens all the time when an overweight fighter has to lose a lot of weight for an important fight.

Sometimes the fighter takes the weight off right, but this wasn’t the time last night. Chavez Jr. took the weight off in too much of a hurry, taking muscle weight as well. You could see how painfully thin Chavez Jr. was last night. His muscles were wasted a way from diet and exercise. We saw the same thing with two of Canelo’s previous opponents Alfredo Angulo and James Kirkland. They both were inactive fighters when they were selected by Golden Boy to fight Canelo. They both had to take off a lot of weight in training camp. They got the weight off, but they were both weak once they got inside the ring. It’s unclear why Golden Boy keeps selecting overweight, inactive fighters to face Canelo instead of putting him in with the best of this era. It shouldn’t have been Chavez Jr. that Canelo fought last night. It should have been someone like Jermall Charlo, Gennady Golovkin or Daniel Jacobs. Those are active fighters, who don’t let themselves get fat in between fights like Chavez Jr. They’re also all middleweights.

De La Hoya seemed a little short of words when he was repeatedly asked by his big Mexican clash between Chavez Jr. and Canelo failed to produce. All he could do was blame on Chavez Jr. It’s kind of disappointing though that De La Hoya didn’t take some responsibility himself by saying that he made a mistake by requiring that Chavez Jr. fight at a catchweight of 164.5 lbs. instead of at the full weight for the 168lb division. It had already been established that Chavez Jr. has been unable to make even 168 in the last 4 years of his career in failing 3 times to make the weight. Requiring that Chavez Jr. drain down to 164.5 was a guarantee that he would be weakened for the fight. I don’t know if it was an intentional strategy by De La Hoya to make sure that Canelo won by all means.

I don’t think it was worth it. Chavez Jr. gave a bad performance that led to a lot of angry boxing fans. De La Hoya wanted it to be an exciting fight, but it was impossible due to the catchweight. De La Hoya should have known this himself, because he had to drain down to 147 to fight Manny Pacquiao late in his career in 2008, and he ended up weight drained in that fight and lost badly. De La Hoya was just like Chavez Jr. last night in failing to throw punches due to him being weak.

”It takes two to waltz and obviously Chavez Jr. didn’t show up to dance with Canelo,” said De La Hoya to ESPN.com.”It obviously wasn’t a fight we’re used to seeing between two Mexicans, but Canelo took care of business, and now next, September 16, Canelo-Triple G. it’s on! On September 16, we’ll have the biggest fight, I believe in boxing history, including the one with Mayweather and Pacquiao. This one, believe me, all dancing partners will show up,” said De La Hoya.

I don’t think Canelo-Golovkin will be bigger than the Floyd Mayweather Jr. vs. Manny Pacquiao fight in 2015. Those were two HUGE PPV stars in boxing that fought each other in that disappointing fight. Canelo isn’t a huge PPV attraction. He’s failed to become a crossover star as of yet. You can argue that the soft match-making by Golden Boy has kept Canelo’s career from blooming the way it would have by this time if he’d been continually matched against the best fighters in COMPETIIVE fights instead of mismatches. We’ve seen too many mismatches involving Canelo in the last 6 years with him fighting the likes of Amir Khan, Alfredo Angulo, Liam Smith, Shane Mosley, Josesito Lopez, Matthew Hatton, James Kirkland and Julio Cesar Chavez Jr. Golovkin isn’t a PPV attraction.

At best, Canelo vs. Golovkin will bring in 1 million buys on HBO PPV. I think it’ll do better than last night’s Canelo-Chavez Jr. fight with the boxing public. Golovkin’s fan base spread out among a lot of different fans. He doesn’t have a built in fan base that mainly support him like Canelo does. That’s why we’ll get a good combination of Mexican and non-Mexican boxing fans purchasing the Canelo vs. Chavez Jr. fight on September 16. It should do really well on HBO PPV. 1 million buys would be great numbers for this fight. The one thing that I worry about is the potential for the boxing fans to be angry from last night’s dud between Canelo and Chavez Jr.

Those fans might be angry and feel they were ripped off by Golden Boy in thinking that the Mexican clash between Canelo and Chavez Jr. was a going to be a war from start to finish instead of a dud. There was no action at all in that fight. It was all one-way traffic with Canelo hitting a badly weakened Chavez Jr. at will with power shots for 12 rounds. The boxing fans were booing much of the time, openly angry that the fight that they thought would be an exciting one had turned out to be one that had zero fireworks.

If those are still angry about last night’s Canelo vs. Chavez Jr. fight, then they may not to purchase the Canelo-Golovkin fight on September 16. We’ll lose boxing fans through attrition. That’s why it’s best for promoters to match their fighters against the best so that they can increase their popularity. You don’t do that by putting them in terrible mismatches, thinking you can impress the boxing public with showcase fights. That’s not how it works. 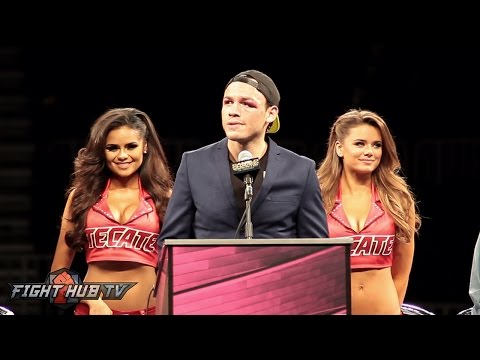