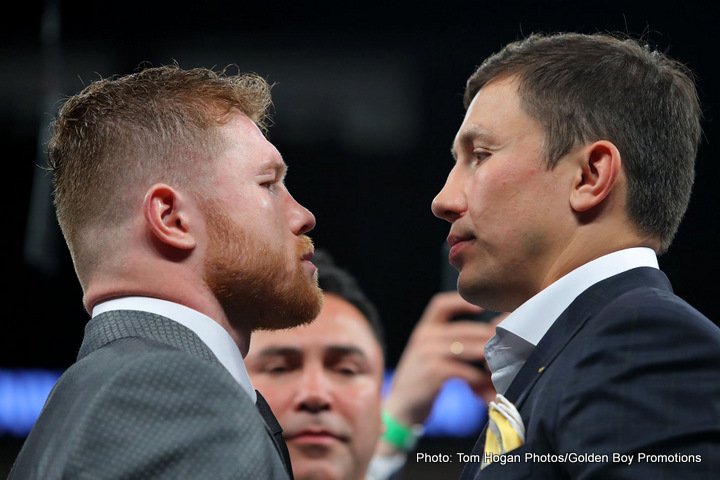 By Rob Blakeman: So Saul “Canelo” Alvarez and Gennady “GGG” Golovkin will finally meet to decide once and for all the questions that lie between them. What could be more agreeable to modern boxing fans than a real battle of skill and courage between two throwback gladiators who more than merely want to win; they would rather die than lose. To my mind GGG and Canelo are amongst the very few, true fighting men in professional boxing.

Men who think only of fighting and would settle this duel as agreeably in a field in front of two men and a dog to decide who really is ‘The Man’ as they would inside a packed arena purely as a way to express their relationship and place within the World of professional sport. This could truly be the defining fight for boxing that we (true fans) have been waiting for. No Joshua/Klitschko this one; not a match-up of a novice on the cusp who hasn’t fought anyone against a once great champion on the slide, no, this is a clash of first class, seasoned fighters with strong, recognizable reputations and a genuine conflict of pride in feuding for the holy grail of boxing, the true lineal, undisputed middleweight championship of the World.

It couldn’t possibly be between two better men in a winner takes all gambit to see who is the better man. This is a real fight then, not yet another grand illusion. For this to be so worthwhile it had to be between the best and most robust in modern boxing. It couldn’t possibly feature such wishy-washy caricatures as say, Amir Khan or Adrien Broner and certainly not such solipsistic fighters such as Chavez Jr or Billy Joe Saunders let alone fringe wannabe’s like Chris Eubank Jr. This should be and must be a really first rate bust-up and therefore by necessity transcend the limits of an ‘Entertaining side show’ and instead be a no fear, shoot to thrill, for all the marbles, Champion of and for, the World.

This fight is the final solution to that painful paradox that exists on the incompatible premise that there can be two true Middleweight Champions on one planet. I know in this commercial branding nightmare that is the current boxing franchise with associated hysterical media there is even more than Canelo and GGG who make claim to that title but really, we know it’s between these two. These men are both virtues of martial valor and together, with this fight alone, they can finally transmute the title from lead into gold.

This then is as close as we are going to come to; ‘The unstoppable force meets the immovable object’. So who can possibly predict the outcome? Can Golovkin’s spear truly pierce any shield or can Teak-tough Alvarez defend against any lance? Both men are classy World champions who have on many occasions displayed courage beyond the call of duty but the winner here I feel, knowing both men’s steely resolve and determination will be the man who can control chaos. It’s a mouthwatering prospect and a reason for living on, and staying involved with this fickle, thankless mistress known as boxing.

I write this as a once and for all courtesy to those of you whom I refer to as ‘Keyboard Warriors’. I rarely read the comments on my articles once they are published on the internet and if I do I pay little or no heed to those from none professional writers. If your opinions mattered in even the least they would be featured on the main page of this glorious website in the form of an article-like mine!