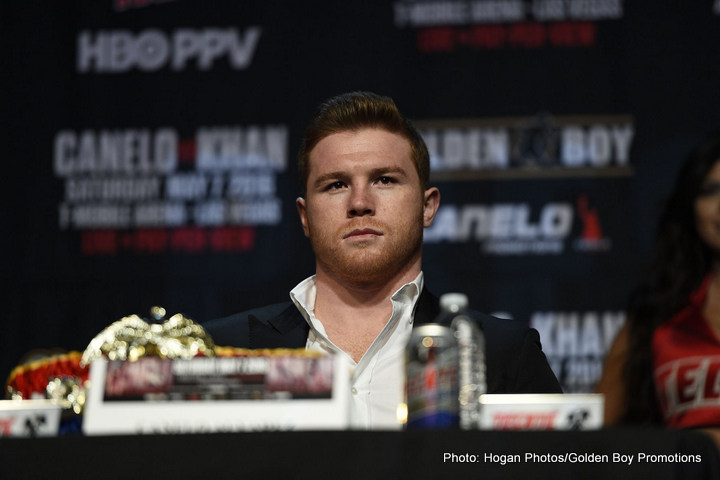 By Eric Baldwin: Julio Cesar Chavez Jr. (50-2-1, 32 KOs) is largely seen by the boxing public as the sitting duck for Golden Boy Promotions’ top money maker Saul “Canelo” Alvarez (48-1-1, 34 KOs) to destroy on HBO pay-per-view on May 6 at a yet to be determined site in the U.S. The price of the Canelo-Chavez Jr. fight will likely be $65.99. That’s a lot of money for a fight that will probably be one-sided from start to finish. Chavez Jr. has problems making weight at super middleweight, and the 164 ½ pound catch-weight for this fight is going to be a real problem for him to make.

The $1 million per pound weight penalty that is in the contract for the fight is there to make sure that Chavez Jr. doesn’t come in over the weight limit. That’s too bad for Chavez Jr. because he’s going to need to boil down hard to make a weight that he hasn’t been at since 2012.

Chavez Jr. has filled out since then, and he’s more of a light heavyweight right now, who has to go through a lot of pain and suffering to make 168. It’s clearly not a division that is right for Chavez Jr. At this point in his career, he’s a light heavyweight whether he wants to admit it or now.

Can you imagine asking Sergey Kovalev to boil down from 175 to make a catch-weight of 164.5lbs for a fight against Canelo? Yeah, Kovalev could do it, but he would likely be in terrible shape after he rehydrated due to the strain he put his body under to make weight.

The fight is the third consecutive mismatch for the 26-year-old Canelo, who had one of his easiest years of his career in 2016 beating welterweight Amir Khan and WBO 154lb champion Liam Smith by knockouts. Neither fighter was seen as top level by fans, even though Smith was technically a champion at junior middleweight champion after beating John Thompson to win the vacant WBO belt.

Canelo’s marketability has been dropping recently with boxing fans showing less interest in paying to see his mismatches in fights that didn’t belong on PPV in fighs against Amir Khan and Liam Smith. Those were not PPV worthy opponents, and yet Golden Boy and Canelo still had the fights televised on HBO PPV. When Canelo first signed with HBO, it was believed that at least one fight per year would wind up on regular HBO. That didn’t happen last year.

At one time, Canelo was willing to fight the best in his matches against Floyd Mayweather Jr., Austin Trout and Erislandy Lara. Those fights were easily the toughest matches of Canelo’s career. But after Canelo’s near loss against Lara in 2014, Golden Boy has backed him away from fighting the quality fighters, and instead has put him in with guys that he had huge advantages against. Even in Canelo’s fight against Miguel Cotto, he had a big advantage in size, power and youth over the Puerto Rican fighter.

Canelo vs. Chavez Jr. will have a lot of action while the fight lasts, but there can be only one outcome in the fight. That’s a win for Canelo. Here’s the kicker: If the fight goes the distance and is even remotely competitive, it will likely be used as justification by Canelo’s promoter Oscar De La Hoya to stage a rematch between the two fighters.

De La Hoya has already gone on record in saying that he’ll make a second fight between them in September if their May 6 fight is a competitive one. Gennady Golovkin, who was previously in the running for the September fight against Canelo, will be bumped from his date and pushed to 2018. Golovkin can’t get the December date that Canelo has planned, because he’s going to fight a rematch with Miguel Cotto in that month. So in other words, Golovkin needs to get in line and wait his turn. When an offer is thrown to him by Golden Boy for a Canelo fight, he’d best accept it for his own good, because they can always trot out Chavez Jr. or Billy Joe Saunders to fight him. Canelo’s boxing fans don’t seem to mind. They’ll pay to see him anyway, even if his opponents aren’t necessarily PPV worthy.

It would be great for Canelo and for boxing if he went back to the fighter that he was in 2013. Canelo was a risk taker back then in facing Mayweather and Trout. Golden Boy Promotions CEO De La Hoya reportedly was against Canelo fighting Trout, but he insisted on the fight. Canelo is said to have insisted on fighting Erislandy Lara in 2014. But since those fights, Canelo has taken a lot of easy fights against James Kirkland, Khan, Liam Smith and even Cotto, who isn’t seen as being in the same class as top junior middleweights Jermall Charlo, Demetrius Andrade and Lara. Cotto lost to Trout and never avenged the defeat.

If Canelo could go back to being the brave fighter he was in 2013, the boxing fans would be in for a real treat, because he would be proving his star power by fighting the best. He’s not doing that any longer. Canelo has transformed into a business fighter, who fights for money, but who isn’t facing the dangerous guys any longer. Chavez Jr. is not a dangerous fighter.

We could give Canelo a break by not pushing him to fight Kovalev, Andre Ward or Adonis Stevenson. All he would need to do is fight Artur Beterbiev, who is the same size as Chavez Jr. A fight between Canelo and Beterbiev would be a lot of fun for boxing fans. It would also be fair fight, because Beterbiev would have a very good chance of beating Canelo and beating him badly, unlike Chavez Jr., who is clearly being brought in without much chance of winning.