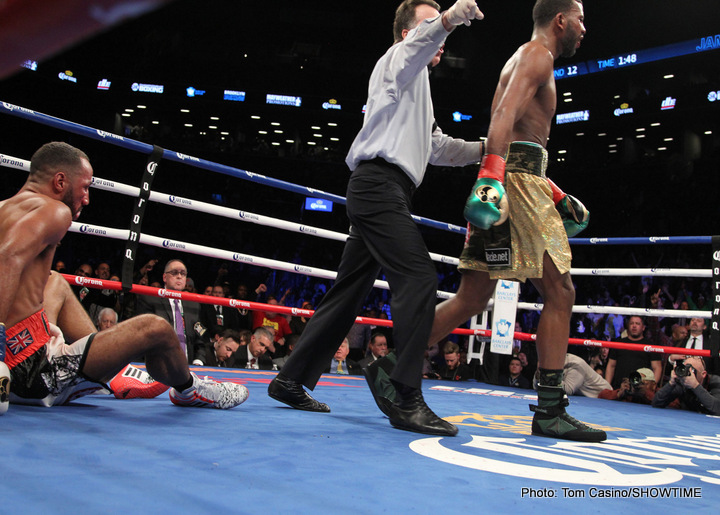 By Gav Duthie: In many ways it’s like the James DeGale vs. Badou Jack fight never happened, no belts have changed hands nobody wins, nobody loses but for those guys in there and anyone lucky enough to watch it you know that was one hell of a fight.

The decision to score the fight a draw and the post-fight comments particularly from Jack himself and promoter Floyd Mayweather Jr. have raised more questions than answers. Was Jack robbed? Will we get a rematch? Is Jack moving up to light heavyweight? What happens with the WBC title? Where do the fighters go next?

The decision (Was Jack robbed?)

First of all, I’d like to clear up I had no problem with the decision. Jack and Mayweather’s attitude to the decision was appalling. The way they were talking about it the fight was a one-sided beat down. DeGale was trying to give nothing but respect for his opponent but Jack felt he won and Mayweather said these decisions are bad for boxing. Floyd cited examples of his own fight against Saul Canelo Alvarez (one judge scored a draw) and Oscar De La Hoya (one judge gave it to De La Hoya). There are hundreds of fights judged worse than those provided by Floyd including an obvious loss he should have received against Jose Luis Castillo. This draw was no disgrace. DeGale won the first 2 including a 10-8 round. He won the third on my card and 9, 10, 11 and that gives him the draw. I can understand Jack’s frustration he controlled a lot of the fight and maybe the fact that he is solid but not eye catching works against him. Jack was superb and he is constantly underestimated. If i had to pick a winner it would have been him but in the end a draw was fair.

Will we get a rematch?

It looks unlikely. Jack and Mayweather surprised us further by saying Jack would be moving to light heavyweight. Normally you here rumblings about fighters struggling with weight but his camp was correct to keep this quiet. In the Pre-fight DeGale was talking about the likes of Callum Smith and George Groves so he has no intention of fighting at light heavyweight. Neither Jack nor DeGale is American so could Eddie Hearn tempt Jack to the UK for more money? Again I doubt it, for whatever reason DeGale is not a PPV fighter in the UK. He just isn’t as popular as some other champions although this fight will have helped. It was a great fight but I don’t think it would make a stadium and would have less interest in Britain than a Groves rematch or a Callum Smith fight in Liverpool.

Is Jack moving up to Light heavyweight?

It didn’t seem like a ploy to get more money for a rematch it looked genuine. The 175lb division is more lucrative at present with Adonis Stevenson, Sergey Kovalev, Andre Ward, Nathan Cleverly, Jurgen Braehmer, Andrej Fonfara and prospects like Oleksandr Gvozdyk, Artur Beterbiev and Joe Smith Jnr. It is quite likely that with his association with the WBC he could get a shot at Adonis Stevenson who is looking at big fights in the twilight of his career.

What happens with the WBC belt?

If Jack moves up in weight his title will become vacant. The organizations have been quite lax in demanding answers regarding fighter’s intentions. The WBC are letting Tony Bellew fight at heavyweight before a mandatory defence and have allowed other fighters similar maneuverability in the past. If Jack is moving up the WBC need to know this asap so they can make arrangements. Callum Smith is #1 and Anthony Dirrell #2. This would be a worthy fight for the vacant title. Smith has been focused on the WBC route and it is up to Smith and Eddie Hearn to decide if they want to continue down this path or fight Degale for his IBF title where is ranked #4. The IBF however may force their mandatory challenger Jose Uzcategui 26-1 (22).

Where do the fighters go next?

There are so many options already aforementioned for both fighters but I think at first Floyd Mayweather, Al Haymon and Eddie Hearn should sit down and see if they can sort out a rematch because everyone deserves one it was a cracking fight.

What now for James DeGale? »