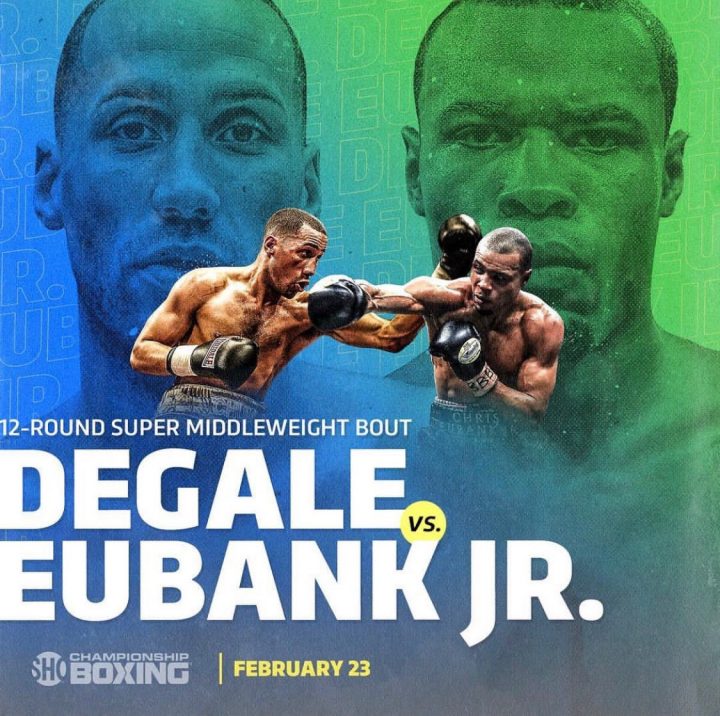 By Jonny Rashman: Fight week is upon us as British rivals James Degale and Chris Eubank Jnr prepare to go to war. Expect fireworks in what promises to be a true British classic. Will the silky skills of Degale prevail? Or will the ferocious and powerful Eubank Jnr be too much to handle?

It’s fair to say there is no love lost between the two warriors. An infamous sparring session in 2012 started a feud that will be settled under the lights at London’s O2 Arena on Saturday night.

Both men have different versions of events as to what transpired that day. Eubank Jnr insists he “schooled” his foe, Degale refutes this, insisting Eubank “ended the spar early.” I suppose the truth will never be revealed.

Currently with the status of both fighters’ careers, this contest is being dubbed a 50/50 encounter. Let’s delve into both men’s profiles to see who has the edge when the first bell sounds.

Firstly, we have James Degale {25-2, 15, KOs]. The 2008 Olympic Games gold medallist. A southpaw with an array of weapons, rapid hands, dazzling combinations, fast feet and a certain swagger that has you believing the world is his oyster.

In the inception of his career, the Olympian failed to capture the British public’s imagination. A string of lackluster performances would incur loud boos from the watching spectators. After changing promoter and embarking on a new challenge fighting the world best in the USA and Canada, the public’s perception would change, giving the Londoner the validation he was desperately seeking.

Victory over Andre Dirrell would cement Degale’s legacy, by becoming the first British boxer in history to have won both an Olympic gold medal and a professional world title. Injuries and punishing fights against Lucian Bute and Badou Jack would take its toll on the IBF champion, resulting in him losing his crown against little-known American contender Caleb Traux. Whispers were floating around that Degale was considering calling time on his decorated career. This was unproven, as a rematch against Traux would see him regain his World Title.

If a fight against Eubank Jnr materialized a few years ago, I believe it may have been an easier night’s work for the Londoner. The fact retirement is on the agenda should a loss occur, casts aspersions as to how much is really left in the tank.

Secondly, we have the enigma that is Chris Eubank Jnr {27-2, 21 KOs]. The son of a boxing legend and a chip off the old block. A stone-faced super athlete, blessed with blinding hand speed, formidable power and a warrior’s mentality, deep rooted in his psyche.

Unlike his counterpart, Jnr had a very limited amateur background. A record of just 24-2 compared to Degale’s 79-16 magnifies this. With a second name such as Eubank, all eyes were on him when he entered the professional ranks. Walking out to Tina Tuners iconic song simply the best, jumping over the ropes and strutting around the ring like he owns it, inevitably drew comparisons to his legendary father.

Excitement and hype surrounded the Brighton man every time he entered the ring and dispatched of an opponent. Eubank Snr’s statements regarding his sons’ ability, had you believing we had a prodigy on our hands. Respected boxing coaches and fighters Adam Booth and Carl Froch have both previously raved about his talents.

There is no doubt Jnr was a raw talent, however, he has deficiencies due to his limited amateur background, this would hinder him when stepping up in class. He would have been better served amassing a lengthy record with carefully picked opponents, in order to gain the experience needed to fulfill his potential.

Has the prodigy lived up to all the hype? No! The way he was vilified for his losses against former World Champions Billy Joe Saunders and George Groves may have been warranted. Although, you must take in to account, he was significantly outclassed in the opening half of both fights, his brute strength and fitness arguably won him most of the rounds in the latter stages, having both men hurt and holding on in the process.

After his two defeats, fans are starting to take Jnr’s usual pre-fight boasts with a pinch of salt. A loss wouldn’t signal the end of his career, as he will always be in exciting fights. Nonetheless, it will cast severe doubts about his standing on the world scene, furthermore, denting the Eubank brand.

In my opinion, this fight hinges on which Degale enters the ring. If he can rewind the clock and confuse Eubank with fast combinations and constant lateral movement, he will win the fight.

If he has dipped a couple of levels and elects to stand and trade with the younger, stronger man, he is in for a world of trouble! Especially if he is backed up on the ropes. Jnr may have his flaws, although, one thing he does possess is one of the most crushing uppercuts in the game. If it lands, it will take you of your feet!

This contest may not be a pound for pound clash, both combatants may not be at the top of their game. However, the speed, power and bad blood on show, ensures this fight has all the ingredients to be a potential fight of the year candidate. Both personalities are box office, which will provide drama boxing fans crave.

Who wins? We will find out very soon!