What now for James DeGale? 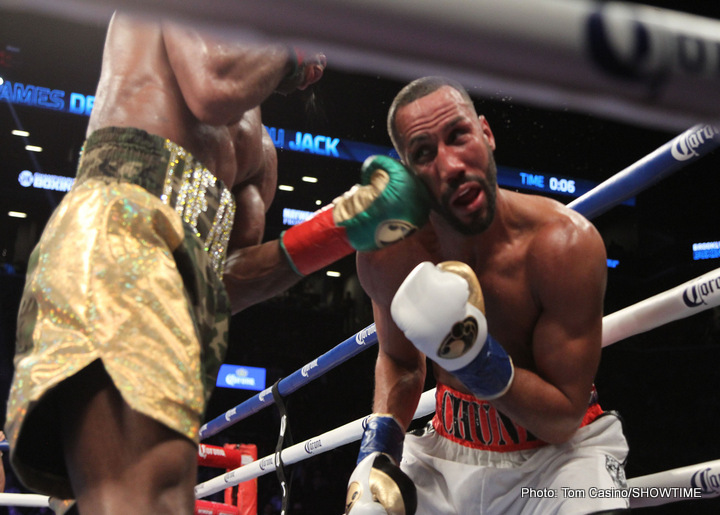 By Adam Godfrey: Following their enthralling majority draw in Brooklyn this weekend, questions regarding British Super-Middleweight James DeGale’s next career move abound. The clamor for a swift rematch is readily apparent, with many fans eager to see a clear winner determined after what was a very tight battle between the two.

As an aside, I would hope that fight fans were content to see Boxing represented with with a to-and-fro humdinger between a pair of evenly matched opponents at the top of their game, and see the majority draw decision as a reflection of a close fight rather than a controversial one. A Super-fight it may not have been, but both pugilists gave World Class Boxing a welcome shot in the arm. With this in mind, what are the options for DeGale in the near future?

1. A rematch with Jack

This is the most obvious next step, but could be thwarted by Badou Jack’s insistence that he has outgrown the division and will fight at Light Heavyweight from henceforth. A fight between Jack and Adonis Stevenson has already been touted (an idea supported by Jack’s promoter, Floyd Mayweather) and Jack may chose to either step straight into the Lion’s Den and match up against the huge hitting Canadian, or ease into the heavier division with a tune up bout against a natural Light Heavyweight first. Either way, it seems unlikely that DeGale will be willing to move to Light-Heavyweight so soon with options around him at his natural fighting weight. It would take a U-Turn from Jack to make this fight happen, although stranger things have happened (such as Chris Eubank Sr.). Probability: 4/10

2. A rematch with George Groves

With DeGale’s profile rising and George Groves perpetually hovering around the Boxing fan’s consciousness, a rematch against the Hammersmith native is a very real possibility. Each man’s career took a different direction following their 2011 grudge match (which Groves won), with Groves becoming a three-time World Title runner up and DeGale capturing the IBF title in 2015 by defeating talented American Andre Dirrell. Although personal animosity has festered between the two men, James DeGale openly supported Groves before his loss to Badou Jack in 2015, rightly deducing that should Groves capture a World Title, a British Unification fight would be huge in the UK. Although Groves failed to capture the title, he is mooted to be facing Russian Fedor Chudinov for the vacant WBA strap. Should Groves capture a World Title at the fourth attempt then a fight between the two would seem to be a given. On the other hand, should Groves remain belt-less, DeGale will not risk losing his title to his bitter rival without a significant potential gain, which Groves will not be able to offer. Probability (should Groves beat Chudinov): 9/10. Probability (should Groves lose to Chudinov): 2/10

Despite Golovkin’s stated aim of capturing all of the belts that the Middleweight division has to offer before he moves up, a bout between DeGale and the Kazakh in the next year or so is not a complete flight of fancy. If this bout is to happen, a lot will depend on other movements in the Middleweight division, and it is possible that the WBO belt that Golovkin currently lacks may move hands over the course of the next few fights, before Golovkin has a chance of claiming it. Once Golovkin is ready to move up it is unlikely that, with time not on his side, he will seek to fight a tune-up first, and DeGale will be laying in wait. DeGale’s would be a major scalp for Golovkin, and vice versa, and ‘GGG’ would relish the opportunity to win a title in his first fight in the division. What’s more, Golovkin’s first experience fighting in the UK, in September 2016 against Kell Brook, was a very positive one, and will be a dangling carrot to try his hand again at infiltrating the British PPV market. Probability (should Golovkin move up in the near future): 7/10

Liverpudlian Callum Smith remains mandatory challenger for Badou Jack’s WBC belt, and should Jack vacate to move up, as seems likely, there is a good chance that the WBC will sanction a fight between Smith and DeGale for the homeless belt. It will be difficult for DeGale to turn this opportunity down with the chance to add another strap to his collection, and a battle with the hard-hitting Smith could be well received by the British public. A spanner in the words may be Smith’s attention being drawn to America, with him stating that he would be willing to face Gilberto Ramirez for the WBO title that the Mexican won from Arthur Abraham in early 2016. Should the stock of Smith and Ramirez continue to rise the lure of American PPV money could be too much for Smith to resist, albeit in the face of the argument that, should he fight DeGale and win, he would have even more chance of breaking through in the States. Again, the likelihood of this fight taking place is somewhat out of DeGale’s hands. Probability: 6/10

The little known Venezuelan is DeGale’s IBF mandatory, but it is likely that DeGale will do everything possible to decline his obligation to take this fight. However, DeGale covets his IBF belt, and if there are no better offers it is highly unlikely that DeGale will vacate his title, and will wind up fighting Uzcategu. Should DeGale feel that the bigger fights are within touching distance, he will battle the South American to remain active and to legitimize his status as IBF champion before fighting one of the previously mentioned fighters in the not too distant future. Probability: 4/10

The running theme when considering DeGale’s short-term career choices is that much rests on the decisions and performances of others in and around his division. DeGale will believe that he deserves to share the plaudits with Jack following their fight and that he will have the leverage in most negotiations that await his team. While he is not yet a household name, his resume stands up to the scrutiny that many will cast when considering his position in the sport, and should stand DeGale in good stead.