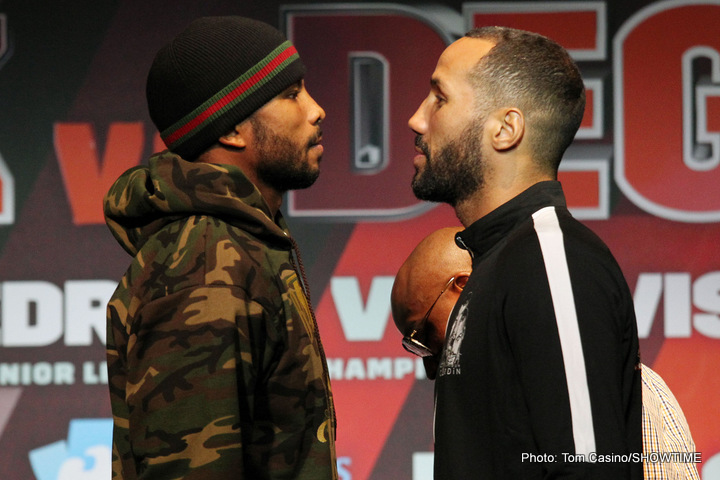 By Scott Gilfoid: WBC super middleweight champion Badou Jack isn’t too worried about his fight this Saturday night against IBF belt holder James DeGale, as he feels he’s got the superior talent to give the British fighter his second loss of his career.

Jack is a little older than DeGale at 33, but he still feels very young, and he’s not worried about being three years older than the 30-year-old IBF champ. Badou (20-1-2, 12 KOs) still sees himself as the better fighter, and he’s going to be looking to prove that when the two 168lb champions step inside the ring on Saturday, January 14 at the Barclays Center in Brooklyn, New York.

The fight will be shown in the States on Showtime Championship Boxing. If Badou can take DeGale’s scalp to add it to his collection, it will set him up to face #1 WBC Callum Smith in his next fight, which could take place within four months of the DeGale (23-1, 14 KOs) fight.
DeGale has some talent, but he’s kind of lazy and has some SERIOUS stamina issues that tend to slow him down in his fights.

We’ve seen that in many of his matches where DeGale gets tired/lazy and backs up to the ropes, where he slaps at his opponents. It usually works out well for DeGale, because he’s not fighting good opposition much of the time. He fights relatively good while fighting off the ropes with the exception of his fight against George Groves.

DeGale got worked over by Groves when he tried to fight off the ropes. Eventually, DeGale had to change tactics and go after Groves in the second half of the fight because he had fallen so far behind. I have a feeling that DeGale is going to find himself in the same position on Saturday night if he uses the ropes as a refuge from the pressure that Badou puts on him.

The judges will score the rounds for Badou one after another unless DeGale meets him head on in the center of the ring and fights him in a toe-to-toe battle. Even then, I don’t know if DeGale has the fire power to turn back the threat of Badou with the two of them trading shots.

“I am very, very confident. I am going to this win IBF belt,” said Jack to skysports.com. “I feel like I am in my prime. I am getting better every day. I am going to be the smarter fighter, I have a smart corner, smart trainer and they know that they’ve got a perfect game-plan. I am going to show you who is the best super-middleweight on Saturday night.”

This is a good match-up for Badou. He does well against lazy fighters, especially ones with stamina problems that perch themselves against the ropes. We saw how Badou was able to work over the talented Anthony Dirrell in their fight in 2015 when Dirrell made the mistake of fighting off the ropes.

Badou landed a lot of thudding body shots with both hands each time Dirrell fought off the ropes, and this enabled him to pull off an upset victory. In hindsight, I don’t know why the boxing fans saw it as an upset, because Badou had already shown the boxing skills in his past fight that suggested that he would be a bad match-up for the stationary Dirrell. Now if Badou had been facing the quicker, more mobile Andre Dirrell, the brother of Anthony Dirrell, I think Badou would have struggled badly and likely lost the fight. Anthony fought the wrong fight in not using movement against Badou, but he had little choice but to fight like that, because he’s not a mobile fighter.

“I believe I am the better fighter, better fundamentally,” said Badou about DeGale. “All that flashy stuff, we’ve got something for that. In the sport’s circle anything is possible, but if I get him hurt I am going to get him out of there.”

It’s not even about Badou needing to hurt DeGale for him to win the fight. If Badou simply takes the fight to DeGale, and hammers him to the body for 12 rounds, it’s going to be a really painful fight for him. DeGale’s opponents usually throw a lot of head shots at him, and he does a good job of moving his head enough to make the punches miss. But, he hasn’t fought a classic body puncher like Badou, and that’ going to be a problem for him because he’s not had to deal with that kind of style. DeGale won’t be able to make Badou’s body shots miss no matter how hard he tries, because he can’t dodge body shots, especially when he’s backed against the ropes trying to rest.

I think the DeGale vs. Badou Jack fight is going to come down to whether DeGale can stay in the center of the ring for 12 rounds to avoid the body blows from the Swedish fighter. It’s going to be hard though, because DeGale tends to spend three-fourths of each of his fights resting against the ropes. When DeGale first turned pro eight years ago, he was able to stay in the center of the ring and fight, but as he’s aged, he’s become slower, and less energetic and incapable of staying off the ropes for any length of time.

Canelo vs. Chavez Jr. official for May 6 – Breaking News! »