Brook’s fight against Spence in limbo with Khan emerging 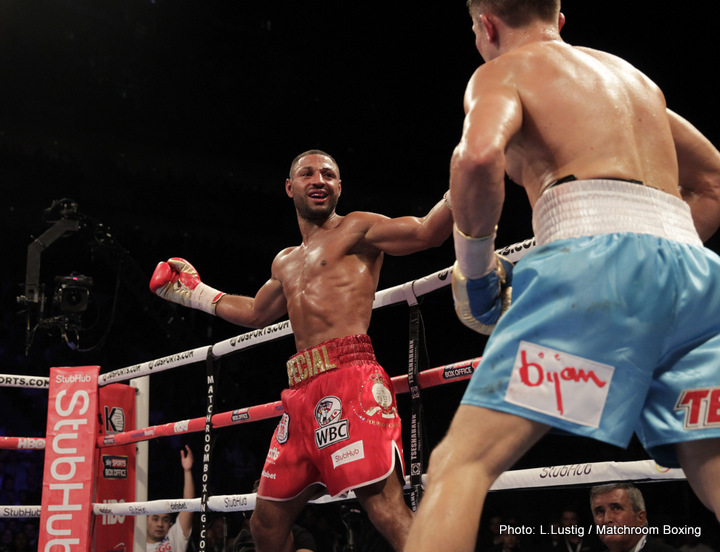 By Jeff Aranow: IBF welterweight champion Kell Brook was supposed to be defending his IBF title next against his mandatory challenger Errol Spence Jr., but that fight is now questionable after Amir Khan said that he wants to fight Brook next. Brook’s promoter Eddie Hearn is now looking to make the fight between him and Khan.

Hearn says he still has a long ways to go in the Brook-Khan negotiations, but he’s optimistic. Hearn isn’t willing to say right now that Brook will need to vacate his IBF welterweight title in order to fight Khan, but it’s starting to look that way. There’s little chance of the Brook vs. Spence fight happening if the Brook-Khan fight takes place.

One way for Brook to keep his IBF title would be for Hearn to offer Spence a step aside payment for him to let Brook move ahead and fight Khan. Spence might not want to take that money, because he gains more by picking up the IBF title and then using it to get the winner of the March unification fight between WBC champion Danny Garcia and WBA champ Keith “One Time” Thurman. Spence’s career will go to the next level once he has the IBF title. Getting a small step aside payment won’t do much for Spence. He needs the IBF title for him to move ahead.

Hearn said this to ESPN.com about the possibility of Brook fighting Khan next:

“Khan recognizes the size of the fight, he’s up for the challenge,” Hearn said. “Kell’s value has increased considerably, and there seems to be a real desire from both sides to get it done…There’s a very, very long way to go, but we’ll work quietly behind closed doors to try to finally get a fight over the line that I believe has to happen.”

Khan would be getting Brook at the right moment. Brook is now having problems making 147, and he’s coming off of a loss to Golovkin and a serious eye injury. Golovkin broke Brook’s right eye socket. That’s a serious injury. Coming back from that injury to go straight into a fight against Khan could be difficult for Brook. He might struggle with his eye and with the weight. Brook put on weight for the Golovkin fight. That weight would need to come off for him to fight Khan at 147.

Hearn is under the belief that Brook is more popular after his recent fight against middleweight champion Gennady “GGG” Golovkin on September 10. Brook gave it his best shot, but he was no match for Golovkin in that fight. Brook was only really capable of landing some shots in the 2nd round.

After the 2nd, Golovkin turned up the pressure on Brook, and the remainder so the fight saw Brook generally on the run and only able to land a rare shot. The judges saw a different fight from the boxing world. They had it even after four rounds. One judge had Brook winning 3 rounds to 1. Perhaps the only reason Brook’s popularity rose from his loss to Golovkin was because he was seen fighting a good opponent. Brook hasn’t done that during his career. He’d been fighting lesser guys other than his one fight against Shawn Porter in 2014.


« Joshua not bothered by Klitschko calling him “Little Bro”