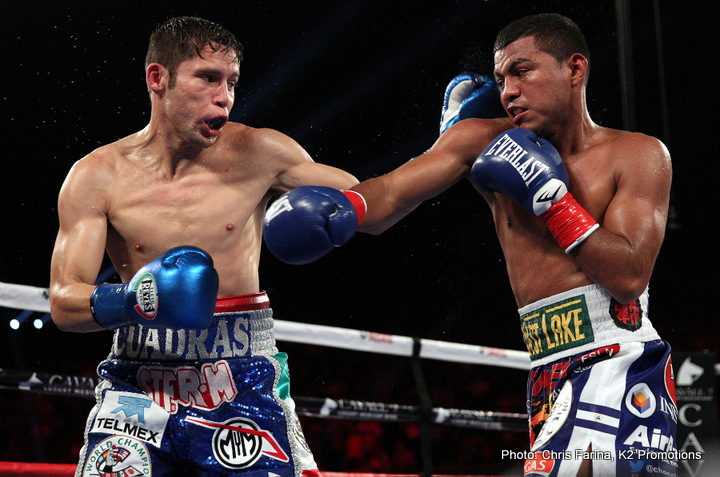 By Eric Baldwin: WBC World super flyweight champion Roman “Chocolatito” Gonzalez (46-0, 38 KOs) will be defending his title against former WBC champion Carlos Cuadras (35-1-1, 27 KOs) in a rematch in March, according to World Boxing Council president Mauricio Sulaiman. This is great news for the fans, because the previous Gonzalez-Cuadras fight was an all-out brawl for 12 rounds.

Gonzalez, 29, defeated Cuadras by a 12 round unanimous decision on September 10 on HBO Championship Boxing in an exciting fight at the Forum in Inglewood, California. Despite suffering a lot of facial swelling at the hands of the younger, bigger and stronger Cuadras, Gonzalez was able to prevail in winning by the scores 115-113, 116-112 and 117-111.

The 28-year-old Cuadras’ heavy hands made the fight a lot tougher than many of Gonzalez’s previous fights in the past. It was a great fight with a lot of back and forth action for the full 12 rounds. The Gonzalez-Cuadras fight was decided by Gonzalez’s busier fighting style. Gonzalez was able to outwork Cuadras by throwing sustained combinations in each round.

Cuadras was able to come back in the last part of the fight to make it close, but he wasn’t able to fight in a sustained enough manner for him to get the decision. Cuadras tended to let his hands go in flurries two or three times a round rather than just standing and fighting Gonzalez. Cuadras also did a lot of holding in the second half of the fight due to him getting tired from the fast pace that Gonzalez had set.

There were a lot of boxing fans who felt that Cuadras had done enough to deserve the victory over Gonzalez. The fans pointed to how beat up looking Gonzalez looked as one of the reasons they felt that he deserved the win.

Cuadras has the power and the size to potentially beat Gonzalez in the rematch, but he’s going to need to be a lot busier than last time if he wants to win. Gonzalez throws so many punches once he gets his offense started, and he doesn’t seem to stop for a moment. Cuadras can momentarily stop Gonzalez’s attacks when he throws his flurries and his big power shots, but he’s not going to be able to beat him that way.

Cuadras needs to change his fighting style for him to win. If Cuadras can’t match the output from Gonzalez, he’s going to lose the rematch. Gonzalez is like a machine once he gets started. It’s hard to stop someone like that. Cuadras’ face didn’t look nearly as beat up as Gonzalez’s, but that doesn’t matter.

Cuadras can’t let Gonzalez get off so many punches like he did last time if he wants to win. One way for Cuadras to keep Gonzalez’s from throwing so many punches is to let his own hands go to try and match him. Cuadras has the power and the size advantage. If he’s matching the work rate of Gonzalez, then the judges will likely give him the win this time around. Cuadras should forget about using his boxing and focus more on battling Gonzalez in the pocket.

The winner of the Gonzalez vs. Cuadras fight will need to fight WBC #2 mandatory Srisaket Sor Rungvisai


« Brook’s fight against Spence in limbo with Khan emerging