Joshua not bothered by Klitschko calling him “Little Bro” 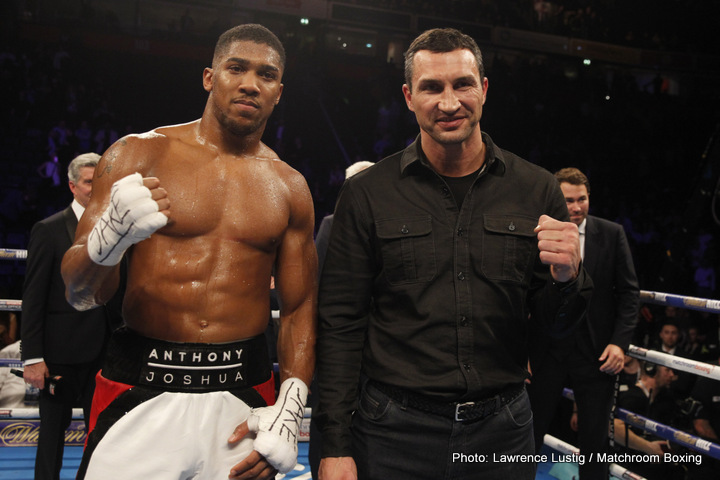 By Scott Gilfoid: IBF heavyweight champion Anthony Joshua (18-0, 18 KOs) isn’t letting former heavyweight champion Wladimir Klitschko’s comments about him being his “Little Bro” get to him ahead of their fight on April 29 at Wembley Stadium in London, England. Joshua says that Wladimir has been calling him “Little Bro” for quite some time, and he never let it get to him.

Joshua, 27, says he’s letting the comments go over his head, but it clearly seems to be bothering the British fighter, because if it wasn’t, he wouldn’t be going on about it as if it’s something important.

The 6’6” Joshua looks a little shorter than the 6’6” Klitschko, even though both fighters are supposed to be the same height. As such, either Joshua isn’t 6’6” or Wladimir is possibly 6’7”. Whatever the case, I doubt that Wladimir has meant to belittle Joshua by calling him little bro. It’s not something that Joshua should be getting worked up about in my opinion. It sounds more a friendship thing with Wladimir, but it appears that Joshua doesn’t quite understand where he’s coming from.

Joshua said this to skysports.com about Wladimir calling him “Little Bro”:

“He can call me ‘little bro’ but, if I spank him out inside a round, it’s irrelevant, isn’t it?” said Joshua about Klitschko. “He’s called me that since the days when we were never going to fight. So I let it go over my head. This is where the respect comes into it. It’s fine. It could get to you, but I let it go.”

Oh my, it sounds like someone is thin-skinned when it comes to being teased by Klitschko. If it really bothered Joshua all this time, then why didn’t he same something back to Wladimir? I mean, come on. What happened to the good natured jokes between friends? Joshua looks like he just took the comments from Wladimir without saying anything, and now it’s gotten to this point where he’s talking about it.

If Joshua wasn’t willing to joke with Wladimir about being called “Little Bro,” then he could have said something about by saying, ‘Please don’t call me little bro because it bugs me.’ That would have nipped it in the bud right away, wouldn’t it? Letting Wladimir say it to him without commenting back seems to have led to him stewing about it.

I think Joshua handled it all wrong. It wouldn’t be a big deal with a lot of boxing fans if they were in the same position as Joshua in being called “Little Bro” by Wladimir, because they would either tease him back or laugh it off. Of course, if they were thin-skinned, they could directly contract Wladimir by telling him to cut it out. Any one of those options would have worked, don’t you think?

“If Wlad wins, he’ll say to himself ‘okay, I’m still the big bro’. But if he loses he’ll realize the torch is changing hands, and it’s a totally different era,” said Joshua. “This is the start of a new legacy of an up-and-coming champion.”

I don’t think Wladimir is going to be thinking to himself that Joshua is still his “Little Bro” if he beats him on April 29. I think it’ll be more of a case of Wladimir realizing that Joshua wasn’t as good as many in the boxing world thought he was, and he would be right about that. Joshua is a good fighter, but he honestly hasn’t fought anyone good since his controversial gold medal in the 2012 Olympics.

That was the Olympics that Joshua won several controversial fights against Erislandy Savon, Roberto Cammarelle and Ivan Dychko. A lot of boxing fans thought Joshua lost those three fights. I had Joshua losing all four of his fights in the 2012 London Olympics. I thought the judging was horrible. Never the less, Joshua has fought anyone near as good as those amateurs since he turned pro in 2013, which is terribly sad, because you would expect fighters at the pro level to have fought better guys than in the amateurs when they’re holding a world title in the heavyweight division.

The fact of the matter is Joshua got an easy title by going after Charles Martin for his IBF belt rather than against WBC champion Deontay Wilder. Let’s be honest here. Joshua got an easy title win by fighting Martin, and then he’s fought and beaten two FRINGE contenders in Dominic Breazeale and Eric Molina in his two title defenses of his IBF belt. Joshua didn’t fight highly ranked guys in his two defenses. He fought two fringe contenders. As such, Joshua is totally experienced at heavyweight, and we do not know how good he is.

Wladimir obviously has seen what I’ve seen with the soft match-making for Joshua, and he probably sees the inexperience. If Wladimir beats Joshua, he’s not going to be thinking of him as the “Little Bro”, he’s going to be seeing him as a guy that needs to have his career build in the right way by facing TALENTED opposition to improve his skills, not the mostly dreadful opposition that Joshua has been fighting since he turned pro. Joshua has been fed guys that a lot of heavyweights would have plowed through.

Honestly, if the guys that Joshua fought in the 2012 Olympics were fed the same soft opposition that he’s been fed since turning pro, I think all four of them would be 18-0 and world champions at this point. Cammarelle, Savon and Dychko would all beat the same guy that Joshua has fought since turning pro in my opinion.

We don’t know how good Joshua is because he hasn’t fought anyone good due to the poor match-making that’s been done for him. For that reason, if Wladimir destroys Joshua, it’ll be due to Joshua not having the proper experience that he needed for that fight. Molina, Breazeale and Martin are not the type of guys that you fight to get ready for Wladimir. Those are the type of guys you fight to get ready for a fight against someone like David Price or Dereck Chisora in my view. Joshua has been taking it REALLY easy since he turned pro, and I don’t think he realizes that. He seems to think he’s been fighting the best.

Sorry, I don’t rate Martin, Breazeale and Martin as the best. Those are good fodder opponents, but not the type of guys that you want to fight to get you ready for someone like Klitschko or Deontay. Heck, I don’t think those guys would be good to get Joshua ready for even Tyson Fury or Hughie Fury. Those are not good preparation for fights against that are crafty and have some talent, even if it’s flawed talent like with the Fury’s.

I hope for Joshua’s sake that a win over the 41-year-old Wladimir doesn’t go to his head. Joshua is the favorite in that fight due to Wladimir’s advanced age, his previous performance against Fury, and his long period of inactivity. If Joshua beats him, then he needs to keep things in perspective. Fury just beat Wladimir. The only thing that Joshua will prove is that he can beat an old guy coming off of a loss and nearly two years of inactivity in Wladimir. I just don’t want to hear Joshua bragging about himself like he’s become a legend overnight based off of a win over Wladimir.

Brook’s fight against Spence in limbo with Khan emerging »