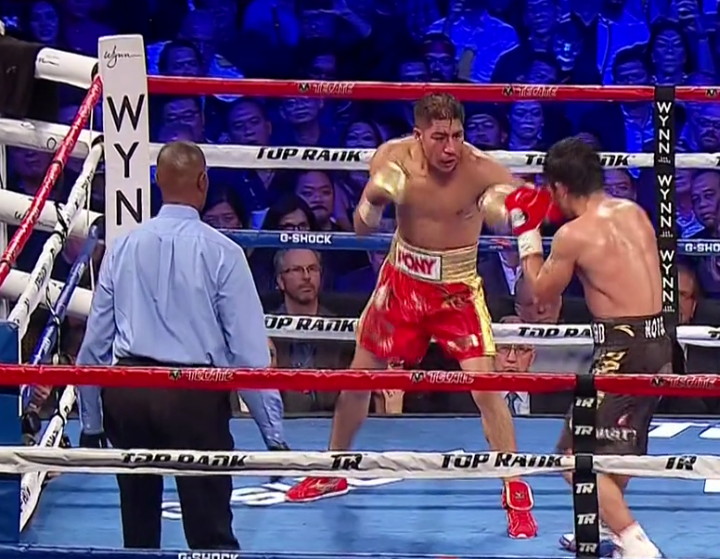 By Dan Ambrose: A lot of fans are excited today after learning that Floyd Mayweather Jr. came to see Manny Pacquiao’s fight last night against WBO welterweight champion Jessie Vargas at the Thomas & Mack Center in Las Vegas, Nevada. Mayweather, 39, didn’t show any signs that he was at the fight to scout out Pacquiao for a possible rematch. On the contrary, Mayweather said he was taking his daughter to the fight and nothing more than that.

Mayweather is not interested in a second fight with Pacquiao. The sooner the boxing public gets that through their minds the better it’ll be for them, because Pacquiao has clearly lost a step or two and isn’t the same fighter he was a year ago when Mayweather beat him.

“I’m just taking her to the fight,” said Mayweather to ESPN.com when asked why he was at the Pacquiao-Vargas fight last Saturday night at the Thomas & Mack Center in Las Vegas.

Pacquiao looked bad in beating Vargas, who he couldn’t hurt with any of his shots, and he couldn’t stop no matter how hard he tried. The major reason why Pacquiao couldn’t get the knockout was because he could not fight in a prolonged manner to get the KO.

For example, Pacquiao would attack briefly once or twice per round. The rest of the time, Pacquiao would stay on the outside and use feints and do nothing. Instead of attacking Vargas, Pacquiao was throwing single jabs most of the time. Pacquiao didn’t look like a shot fighter, but he looked awfully close to being shot. Like an older fighter, Pacquiao waited around on the outside and couldn’t or wouldn’t pull the trigger on his shoots, even though they were there at all time.

Pacquiao looked slower, stiff and nothing like the fighter that existed two or three years ago. If you compare how Pacquiao looked last night to how he looked in 2009 in his fight against Miguel Cotto, it was as if you were watching two different fighters.

After the Vargas fight last night, Pacquiao had the chance to tell the boxing public that he wanted the Mayweather fight next during his post-fight interview with the Top Rank hired interviewer. However, instead of telling the fans that he wanted Mayweather, Pacquiao left the choice of his next opponent in the hands of his promoter Bob Arum.

“I’m going to go back home to the Philippines and back to work in the senate, and then I’ll talk to [Top Rank promoter] Bob [Arum] about my next fight,” Pacquiao said. “I don’t know who the fight will be — whoever the people want me to fight. I am not picking an opponent. Whoever my promoter gives me, I will fight. Anybody at 147. [Junior welterweight champion Terence] Crawford at 140? Not a problem.”

If Pacquiao is going to leave the decision in the hands of his promoter Arum, then it’s pretty obvious that Arum is going to match him against one of his own fighters in his Top Rank company such as Terence Crawford. Look at the match-making that Arum has done for Pacquiao in the last seven years.

Of the 13 fights that Pacquiao has had, 11 of them have been against a Top Rank fighter. That’s 11 of 13 fighters that have been with Top Rank for Pacquiao. Only on three occasions has Arum not matched Pacquiao against a Top Rank fighter in the last seven years. It’s not likely that Arum is going to change the way he matches Pacquiao at this point. Pacquiao will very likely fight Crawford or one of Arum’s other fighters in his stable next, and Mayweather will not be the one that he faces.


« Pacquiao willing to fight Crawford next at 140