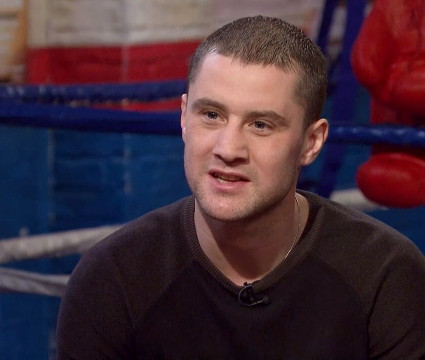 Burns and the 34-year-old Di Rocco will do battle at the SSE Hydro Arena, Glasgow. Burns, 33, is considered the favorite to win the fight in the eyes of many boxing fans, and it’s hard to argue with that when you look at Di Rocco’s resume of fights.

It’s completely barren of talented opposition, and it makes you wonder what was going through the minds of the World Boxing Association when they sat down to make the Italian Di Rocco their number one contender in the division.

I can’t even argue that Di Rocco deserves to be ranked No.15, because that’s too generous a ranking for him in my view given the opposition he’s been facing.

“I was meant to fight Adrien Broner at super-featherweight and lightweight,” said Burns via ESPN.com. “It’s always been a fight on the table but you don’t know what sort of Broner will turn up and if he’ll make the weight. I’ll take on anyone if I win though. The last couple of years have been up and down for me, but I don’t need any extra incentive on this fight, it’s a massive chance for me to create history.”

What Burns doesn’t say is that he opted to move up in weight to the lightweight division when he had the chance to fight Broner in 2011. Instead of fighting Broner for his last fight at super featherweight, Burns fought Nicky Cook in a fight that ended immediately with Cook’s back giving him problems in the 1st round in July 2011. When you look back at that time, you have to wonder why Burns didn’t take the match with Broner, because it would have given a nice payday.

Burns sees the Di Rocco fight as just another fight for him.

“To me it’s just another day and another fight,” Burns said to IFL TV.

Heck, even if Burns had lost the fight, which he probably would have, he could have quickly rebuilt his career afterwards. Taking a loss to Broner wouldn’t have been nearly as bad for Burns as his subsequent defeats against Dejan Zlaticanin, Terence Crawford and Omar Figueroa. There was also the controversial 12 round draw Burns got in his fight against Raymundo Beltran in September 2013 that many boxing fans saw as a loss for Burns. I mean, I just do not understand why on Earth Burns didn’t take the fight with Broner when he had the chance.

It was a real head shaker for Burns not to take the fight. I could have understood Burns not taking the fight if he were getting monstrous paydays and if he were fabulously rich. If that were the case, then it would be no big deal that he opted not to fight Broner, but Burns wasn’t super, super rich. He should have taken that fight because the chances are that he wouldn’t have been that bad off even if he had lost. As long as Burns was competitive with Broner, he would have come out looking good even in defeat.

Broner (32-2, 24 KOs) lost his WBA World light welterweight title last April on the 1st when he failed to make weight for his title defense against Ashley Theophane. Broner won the fight by a 9th round knockout, but his WBA title was stripped from him ahead of time when he came in heavy at 140.5lbs the day before the contest. Since that victory, Broner has been mentioned as possibly challenging WBC welterweight champion Danny Garcia for his title. 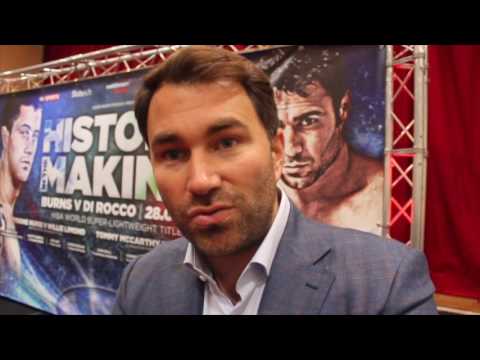 However, there’s still no contract for that fight, and it’s possible Garcia could go in another direction to fight Amir Khan if he’s able to face him next. Broner needs a fight, and it would be good for him to be able to recapture his lost WBA 140lb title by beating Burns for it.

“I’ve put myself through it over the last 10 weeks because there’s no way I am losing — I am ready for anything that comes my way,” said Burns.

I think there’s no question that Burns will likely do a number on Di Rocco on Saturday night. Di Rocco looks like nothing special in seeing his recent fights against Alexandre Lepelley, Kasper Bruun, Ruben Nieto and Istvan Kiss. It’s kind of sad that those were Di Rocco’s last four opponents because for a guy his age and as far along as he is in his career after 12 years in the game, he should be fighting much better opposition that than.

I frankly don’t understand how a guy with a 40-1 record is STILL fighting the kinds of opponents that Di Rocco is. The thing of it is, Di Rocco will likely be in shock when he gets inside the ring on Saturday night against Burns and is suddenly dealing with a much better class of fighter than the guys he’s been facing.

As long as Burns doesn’t mess things up for himself by holding 24/7 on Saturday night, he should be able to breeze to victory over Di Rocco. I just hope for Burns’ sake he doesn’t resort to his nonstop holding like he frequently does in his fight because he could wind up losing the fight by either point deductions or disqualification if he does that. Burns lost two points for his holding in his loss to Figueroa in May 2015.