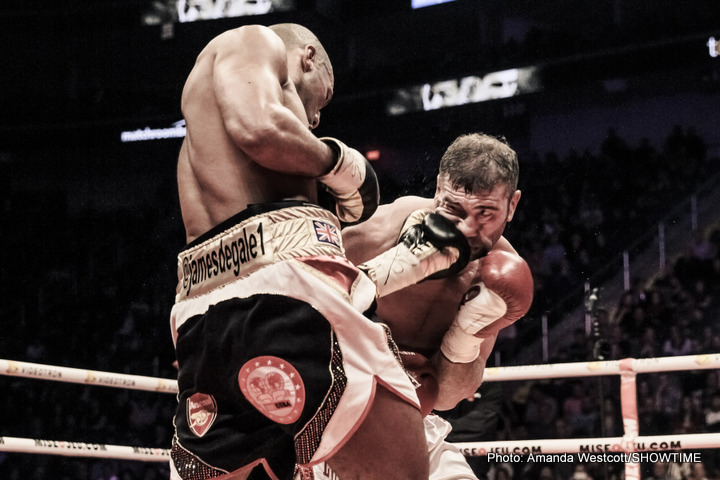 By Scott Gilfoid: WBC super middleweight champion Badou Jack (20-1-1, 12 KOs) will be defending his title against Lucian Bute (32-3, 25 KOs) next month on April 30 on Showtime Boxing. The possible venue for the fight will be at the DC Armory in Washington, DC, according to Dan Rafael.

The idea of having DeGale and Badou on the same card is that there could be a unification fight between the two of them in the near future. By having both fighters on the same card, it’ll help attract interest from boxing fans for an eventual fight between them. Of course, if one or both of them lose their fights on April 30th, then that’ll wreck the plans for that fight.

If Bute captures the WBC title, he could very well go back to Canada to make his defenses against whoever. I don’t imagine he’d want to bother fighting DeGale again after his lost to him.

This should be a good card. It’ll be great to see how well Bute can do in this fight against Badou. Bute came close to beating DeGale in his last fight, and I thought he deserved at least a draw out of it. Bute will need to fight extra hard if he wants to have a chance of winning the fight, because he’s not going to get the benefit of the doubt if he doesn’t let his hands go.

DeGale, 30, will be making his second defense of his IBF title that he won last May. He defeated Bute last November in his first defense. DeGale wants a bigger money fight against George Groves, but he’s going to have to settle for a unification fight against Badou.

I’m not sure why Groves doesn’t go for the fight against DeGale right now because it would be better for Groves to take the fight now before he gets beaten again and doesn’t have the option for the fight.

Rogelio Medina is a pretty big puncher, and you can’t rule out a knockout win for him over DeGale. If Medina can put enough pressure on DeGale, I wouldn’t be surprised at all to see an upset in that fight. DeGale seems to wither under pressure, and he’s more of a six-round fighter than a 12 rounder. DeGale’s face swells up easily, and I could see Medina closing one or both of his eyes with his big punches.

I expect the Badou vs. Bute fight to be the more interesting fight on this card because it involves two evenly matched fighters. The DeGale-Medina fight is more of a mismatch, and I think we’re going to see DeGale a doing a lot of running to keep from getting nailed by Medina. It could be a real stinker if DeGale runs too much, which I think he will.

Algieri in tough against Spence »