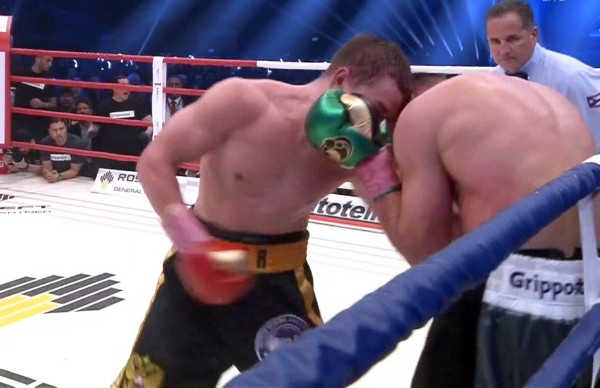 By Scott Gilfoid: Former WBA super middleweight champion Fedor Chudinov’s camp is reportedly complaining about the gloves that Chudinov (14-1, 10 KOs) was given for his title defense last Saturday night against home fighter Felix Sturm (40-5-3, 18 KOs) in their fight at the Koenig Pilsener Arena, in Oberhausen, Germany.

According to Fight News, Chudinov’s Grant gloves were shedding red paint during the fight. The paint seems to have stained Chudinov’s tape around his wrists red. You can also see the same red stain in Sturm’s hand wraps despite the fact that he had green gloves and started the fight with white tape. The tape turned to red. Sturm also used Grant gloves. It would be interesting to know if the gloves had been tested before in other fights or if this was a new design with a no red ink for the color of the gloves.

Both fighter’s gloves will be inspected to see if something was wrong.

“It’s obvious that something not cool went down in that camp with Chudinov’s gloves,” said CEO of Grant Gloves Elvis Grant Philips to Fightnews.com. Do you have any idea what it takes to make both labels fall off the gloves and the color on tanned leather to come off completely to see the natural skin, all in 36 minutes of use? Sturm told me and his camp that his forehead was burning but he didn’t know why?”

What I don’t understand is why was the tape around the wrists for BOTH fighters stained red later in the fight? What’s not being said is that Sturm’s tape ended up being red too. It wasn’t just Chudinov’s. If you look at the start of the fight, both fighters had white tape around their wrists. Starting in the 4th round, you can see red around both fighter’s wrists. The only explanation I can think of is that the stain from Chudinov’s gloves were getting on Sturm’s tape around his wrists.

As for the fight, Sturm won the fight by a controversial 12 round majority decision by the scores 114-114, 115-113 and 115-113. The outcome wasn’t a popular one with the boxing public, as many fans felt that Chudinov had done more than enough to deserve the win. I thought Chudinov won the fight 9 rounds to 3, because he out-landed and out-punched Sturm throughout the fight. Chudinov appeared to be landing the harder blows as well and was easily the more active of the two fighters. Chudinov was the visiting fighter from Russia, and fighting in Sturm’s home country. Some fans feel that to beat a home fighter, you’ve got to do a little extra. I had Chudinov winning the fight with a six round cushion, but I guess that wasn’t enough.

There was a rematch clause in the contract so it’s possible that we could see a rematch between Chudinov and Sturm. However, it’s unknown if the rematch is for an immediate rematch or if it allows Sturm to fight once in between. If Sturm can fight once before facing Chudinov again, then it would give Sturm the chance to fight a unification bout against WBO super middleweight champion Arthur Abraham.