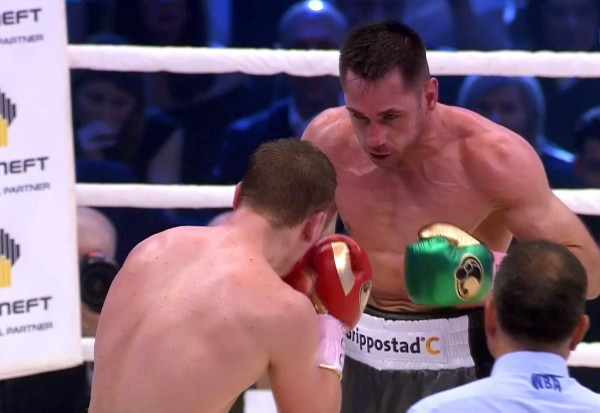 By Jim Dower: WBA World super middleweight champion Felix Sturm (40-5-3, 18 KOs) has reportedly tested positive for the banned anabolic steroid stanozolol from his controversial 12 round majority decision win over Fedor Chudinov (14-1, 10 KOs) two months ago in their fight on February 20 at the Koenig Pilsener Arena, in Oberhausen, Germany.

The judges scored the fight 115-113 and 115-113 for Sturm, and 114-114. However, many boxing fans felt that Chudinov had done more than enough to deserve the victory over the German based Sturm. Unfortunately, the ending was controversial and was seen by a lot of fans as Sturm winning a hometown decision.

The positive test for the 37-year-old Sturm could mean that he will be stripped of his WBA 168lb title by the World Boxing Association. It’ll be up to the WBA to make the decision.

“I’ve been tested in my career 100 times, and always the results were negative,” said Sturm via the Cologne Express as quoted by Fight News. “The fact that after two months such news comes and the BDB wasn’t informed, how can this be? I will bring in the lawyers and open the B sample.”

After the fight, there was controversy about the ink from Chudinov’s running into the tape of around his wrists and getting onto the tape of Sturm’s gloves.

The positive test for Sturm, and the recent loss for WBO super middleweight champion Arthur Abraham to Gilberto “Zurdo” Ramirez last Saturday night in Las Vegas, Nevada, sinks any chance of a big money unification fight in Germany between Sturm and Abraham. Both fighters are German based stars that have built up a huge following in that country over the years. It would have been perfect for the two of them to face each other as super middleweight champions. Now the only way they can fight each other is without a world title fight on the line unless the two of them are somehow able to recapture world titles. At their advanced ages, it’s not probable.