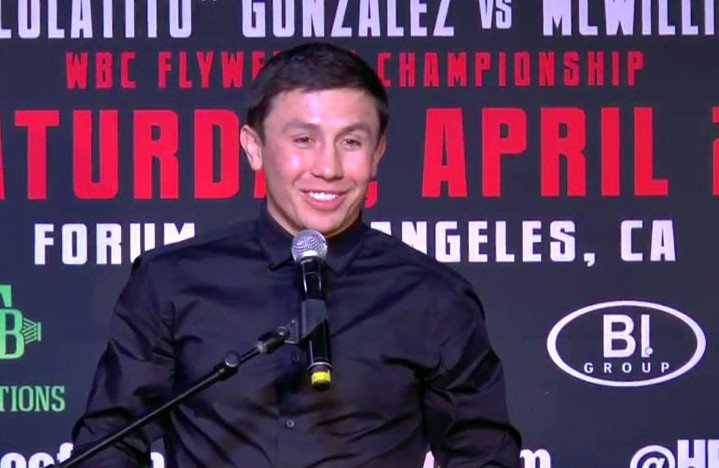 By Andy Hayes: I’m reading so many articles, gossip columns, tweets and so on about Kazakhstan’s 34-0 punching machine Gennady Golovkin and what he would do in a super fight with Floyd Mayweather. ‘He would walk through him’, ‘destroy him’, ‘Golovkin would knockout Floyd’ these are just a few of the type of things you can expect to hear when this subject is hot topic of conversation.

To make one thing clear, the 49-0 one time P4P champ, has already clarified his intentions by stating that he would not be able to step up to Golovkin’s weight. However, Golovkin has confirmed he would step down should the fight ever happen. So in true Boxing fashion, we can only right now make the best of a hypothetical situation. With that being said, that’s not to say that the ‘money’ man won’t some day grace the ring one last time for a showdown with Golovkin, and if he does I am more than confident Floyd would win….comfortably.

I understand why fight fans have a genuine buzz for GGG, he’s hit the Boxing scene with a bang, literally. Making full use of his punching power and ability to walk through shots to gain an advantage over his opponents. He’s exciting, with a scene of vulnerability until he steps between the ropes. He smiles when at press conferences or in interviews, these are the attributes that build up one of Boxing’s most loved characters right now.

Mayweather on the other hand, does not punch hard, avoids walking through punches, exudes confidence at any given opportunity and became one of Boxing’s villains for doing so. However these are Floyd’s attributes, and these amongst other skills packed in his arsenal, are the reason he would have no problem beating the current Middleweight king.

Mayweather’s record stands for itself, and as much as people won’t want to admit it, it’s a record that will stand up against those of the best. Remaining unbeaten has the likes of Joe Calzaghe and Rocky Marciano firmly cemented in Boxing’s history, as will the ‘pretty boys’ record. Only I can’t help but think people won’t recognize it until the name Floyd Mayweather becomes a thing of the past.

It’s not only his record, but the array of different fighting styles he overcame along the way. Throw Manny Pacquiao, Saul “Canelo” Alvarez, Marcos Maidana, Miguel Cotto and the rest of these great names into the mix and you could most definitely mould a Gennady Golovkin type fighter. The problem for Golovkin is Mayweather has always found a way of beating these men. Taking away power, slowing them down, slipping each punch and genuinely spoiling fights where necessary. Yes he has done his fair share of ‘running’, but as unpleasant as it is to watch, that continuous running has gifted him numerous world titles across numerous weight classes, a place in Boxing folklore and $900M worth of assets.

Golovkin also remains unbeaten, however I have seen very little that suggests he would make easy work of Mayweather. I don’t deny his ability, I also can not accuse him of not being entertaining, however I can say that if they did meet, walking through punches won’t work, trying to land that power punch won’t work and trying to defend himself from being hit won’t work. No matter what he has shown so far in to his career, it’s not enough to convince me that he can beat one of the best fighters to ever get in the ring. Watch back the fights, analyze the craftsmanship and the opponent in hand, and I’m sure you will acknowledge my argument. I am aware this will undoubtedly cue and orchestra of fan boy chants, however the proof has been written across a decade of defending world titles. I guess we will have to wait to see if the fight ever happens, or we can measure GGG’s success over 12 rounds with Alvarez.