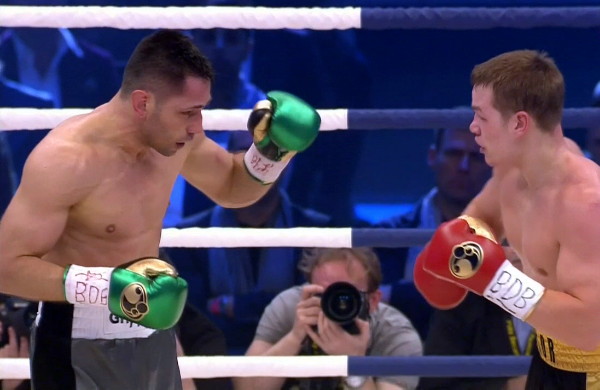 Chudinov BADLY outworked Sturm in this fight, and had him cut on the side of his right eye. Sturm’s left jaw was swollen, as if it were some kid of injury there in the 10th.

In the 7th, Sturm looked totally winded and was taking a beating. However, the two fighters clashed heads, and Sturm needed a time after that. It looked to me like Sturm used the head-butt as an excuse to rest and regenerate his energy because he really milked the time out given to him by referee Luis Pabon.

In many of the rounds, Sturm would make a late surge in the last 30 seconds to try and steal the rounds. He was doing nothing for the first two and a half minutes of the round, but then he would turn it on in the last seconds. The judges are supposed to be aware when a fighter does this and not give them rounds based on the last few seconds. Unfortunately, it pays off for fighters to fight hard only at the end of the rounds because the judges frequently only remember the last thing they see.

Unfortunately, it’s not surprising that Chudinov lost the fight because he was the visiting foreign fighter coming to Germany to fight a popular aging fighter in Sturm. I figured that the only way that Chudinov would win the fight by a decision was if he pounded the stuffing out of Sturm and made it look so that the judges couldn’t possibly mess things up. I guess dominating 9 or 12 rounds wasn’t enough. Chudinov would have had to dominate 11 of the 12 rounds to get the win. It’s so, so sad.

Sturm looked like he gassed out after the 2nd round. He faded completely after the 2nd round, and Chudinov took over the fight and battered him with shots. The German crowd cheered like mad each time that Sturm would throw anything at all. I had a feeling that the judges would be impressed by the cheering. The thing is the crowd was silent for long stretches of the fight. They were completely silent. The reason why was because Chudinov was dominating the ac tion and outworking Sturm. It was all Chudinov.

It’s going to be interesting to see what the World Boxing Association does now after this controversial decision. When Sturm was beaten last year in May by Chudinov, he appealed to the WBA and was given a rematch. I don’t know why the WBA gave Sturm the rematch because it was a clear win for Chudinov in my opinion. But I want to see if the WBA will turn around and give Chudinov a rematch, because this really is a controversial outcome, unlike the first fight. My guess is Chudinov will never get a rematch. I don’t see it happening. I think Chudinov is out of luck. Sturm got his rematch, but I don’t think the WBA is going to give Chudinov a chance for a third fight.

Former IBF super middleweight champion Lucian Bute is a possible opponent for Sturm, as is WBO super middleweight champion Arthur Abraham. As bad as Sturm looked tonight and in his previous fight against Chudinov, I think he’s going to go for the biggest payday possible against Abraham or Bute. I don’t see Sturm electing to fight a voluntary defense, because even the bottom feeders in the division would likely do a number on him. I know #15 WBA Jaime Cox would love a chance to fight Sturm. I don’t see that happening. Cox would likely beat him worse than Chudinov did, but then again it might not matter if Sturm has the quality of judges that we saw tonight. Never the less, I see Sturm looking for a big cash out fight for the largest payday possible against Abraham or Bute. Abraham will need to win his next fight against unbeaten challenger Gilberto Ramirez on April 9 for him to face Sturm in a unification fight.

Mayweather: Triple G would be easy work at 160 »