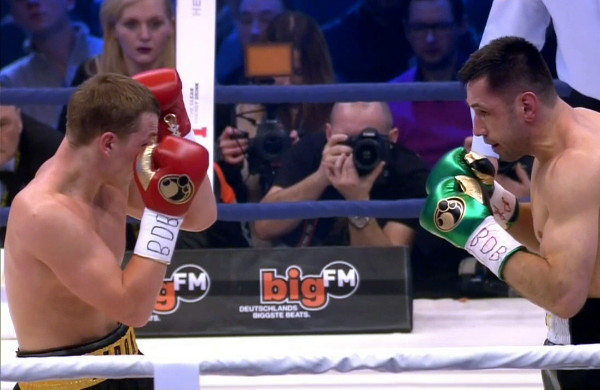 By Jim Dower: Former middleweight world champion Felix Sturm (40-5-3, 18 KOs) showed that he still has a little left in the tank in beating previously undefeated WBA Super World super middleweight champion Fedor Chudinov (14-1, 10 KOs) by a close 12 round majority decision on Saturday night to win his WBA title at the Koenig Pilsener Arena, in Oberhausen, Germany.

The fight was very close affair with Chudinov outworking Sturm from the third round on. However, Sturm landed the cleaner shots in most of the rounds, and that was what the judges focused on. Chudinov appeared to out-land Sturm by a 3 to 1 margin on by punch stats, but Sturm landed the cleaner shots when he did land. Further, Sturm had the crowd cheering loudly each time he would land anything, and that might impressed the judges.

Chudinov started out poorly in the first two rounds, as he allowed Sturm to control both rounds with his sharp punches. Sturm seemed to tire starting in the 3rd round, and this enabled Chudinov to outwork him for the next eight rounds until Sturm came alive in the 12th and appeared to win that round.

You can make an argument that Chudinov, 28, deserved the decision. But with the fight taking place in Germany, you have to consider that as four rounds in the bag for Sturm right off the bat. Chudinov needed to fight harder, throw more combinations, and not take a backwards step if he wanted to win. He was fighting too much on the outside and not staying in close the entire time like he did in his win over Sturm in their first fight in May 2015.

With this win, Sturm could wind up facing WBO super middleweight champion Arthur Abraham if he defeats challenger Gilberto Ramirez on April 9. Sturm vs. Abraham would be a big all German fight, as both champions live and fight out of Germany. Sturm could also choose to milk his new WBA title for a while against the fringe contenders until he needs to defend it against a No.1 contender. The World Boxing Association’s rankings right now is a mixed bag. They’ve got a lot of fighters ranked in the top 10 that Sturm would have a good chance of beating, especially with him fighting in Germany.

31-year-old former two time world title challenger Francesco Pianeta (33-2-1, 18 KOs) bounced back from a loss in his last fight to defeat an over-matched inexperienced fighter Hasan Olaki (6-3, 3 KOs) by a 5th round TKO.

Pianeta knocked the 36-year-old Olaki down in the 3rd round. In the 5th, Pianeta dropped Olaki for the second time. The fight was then halted at 1:50 of the round.

In Pianeta’s last fight, he was stopped in the 1st round by WBA “regular” heavyweight champion Ruslan Chagaev last year in July 2015.

« Matthew Macklin vs. Brian Rose on April 9 on Martin-Joshua card