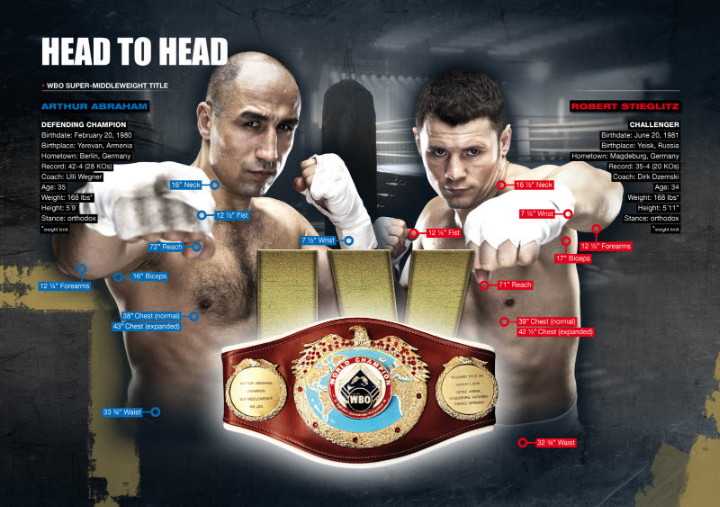 It’s a mandatory defense for the 35-year-old Abraham, which gives him and his promoters at Sauerland Events an excuse to make the fight with Stieglitz. However, given the money that the first three fights between them have generated, it was clear that Abraham was going to fight Stieglitz in 2015 anyway.

This is the fourth fight between the two German based fighters, and supposedly the one that closes the book on the fights. Abraham beat Stieglitz by a 12 round split decision in 2014 to win the WBO super middleweight title. If Abraham loses tonight, his promoters are going to have to come up with a different marketing slogan to call his fifth fight against Stieglitz next year. Whatever they want to call it, it’s forlorn.

While the German public loves the constant Abraham-Stieglitz rematches, boxing fans from other parts of the world don’t feel the same attraction for the fights. They want to see Abraham or Stieglitz start fighting other opponents when defending the WBO title. Since those two fighters seem to have had a lock on the WBO title for the past six years with their easy title defenses and their constant rematches with each other, fans want to see Abraham or Stieglitz fight some of the other contenders that have some actual talent.

We saw Abraham burn up two fights recently in defending his title twice against Paul Smith. Instead of facing contender Gilberto Ramirez or Andre Dirrell, Abraham took the easy option of fighting Smith twice, and the World Boxing Organization let it happen without blocking the second fight.

“This is not a fight that needs to be hyped,” Abraham’s promoter Kalle Sauerland said. “You need only look at the first three fights between Arthur and Robert to know what we have in store for Saturday night. I’m expecting another entertaining battle and a fitting end to their epic rivalry.”

The fights are interesting to watch between Abraham and Stieglitz, but it’s kind of unsettling when you realize that there arguably better contenders in the division than either of these guys. You just wonder why the other contenders aren’t getting a shot at the WBO belt instead of Abraham and Stieglitz fighting each other over and over and over again. The WBO should have stepped in and come up with some ranking that pushed Stieglitz down after he was beaten instead of keeping him at No.1 last year.

Like I said, I don’t see tonight’s fight between Abraham and Stieglitz ending the rivalry. I see it going until these guys retire, whenever that is. I still see them fighting each well beyond 2015. But it’s going to make the WBO look very, very weird if they keep positing Stiegitz at no.1 after wins over fluff opposition. At some point, it just reflects on the organization itself by them ranking fighters at No.1 following a draw against Felix Sturm, a win over Sergey Khomitsky and a loss to Abraham.

As for who wins tonight, my guess is Abraham will beat Stieglitz. He’ll get outworked, as he always does, but the judges will give him at least seven rounds due to him landing the harder blows. The fans will likely feel that Stieglitz did enough to deserve the win, but the judges will have the final say so in giving it to Abraham. Then after this, we’ll likely see a fifth fight in early 2016 between them. From there, I see it continuing with a 6th fight in 2017. The good news is they’re only fighting each other once a year. The bad news is they’re not fighting quality opposition in between their constant rematches.