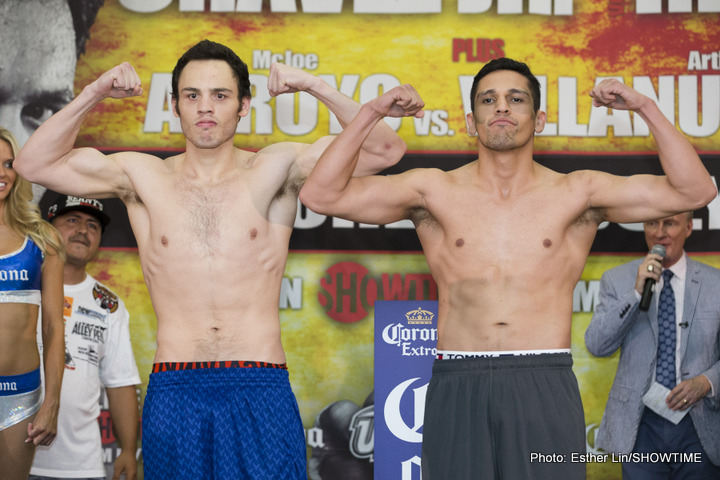 By Yannis Mihanos: An elite fighter should be in top shape any day and anytime. Floyd Mayweather Jr. is an elite fighter for the last 18 years. He has been consistent with his work ethic and training; his mojo is plain and simple: “Hard work and dedication”. Former WBC middleweight champion Julio Cesar Chavez Jr. (48-2-1, 32 KOs) fights Marcos Reyes (33-2, 24 KOs) in a 10 round bout on Premier Boxing Champions on Showtime from the Don Haskins Center in El Paso, Texas.

Often professional fighters fail to arrive close at this level because they fail to follow this rule. Their dedication in the sport of boxing has many holes to fill. Their hard work and dedication comes consistently under doubt.

Former WBC middleweight champion Julio Chavez Jr. (48-2-1, 32 KOs) has already experienced many ups and downs in his career. His popularity as a fighter has come mostly by his surname: Chavez.

But the shadow of his legendary father Julio Chavez Sr. has proved too much to handle.

Chavez Jr. struggles are many, one of them is weight management. Often comes to the weigh in of his fights overweight. Even for his tonight fight came yesterday over the weight limit.

Chavez Jr. is a strong fighter, no doubt about it, with his power punches he can inflict damage to any opponent. He can rock about anyone in his division.

Two days ago, I watched him on a short interview speaking about his transformation and desire to become a world champion again.

That’s good to say but is that enough to help rise from his failing career?

Chavez Jr. hired a great trainer on his side: Robert Garcia. Garcia is most famous of the way he resurrected the career of Marcos Maidana.

Garcia is a very serious and good coach, all these are good news for Julio but there is more to it: if Chavez fails again to commit in the long term then Garcia will be gone in the split of a second. Money cannot change his philosophy.

Garcia is a trainer who wants more and needs less. He already trains good fighters at his gym and Chavez will be the new addition between them.

Some believe that this is what Chavez needs to turns his career around. With Garcia, Maidana got his two biggest fights against the one and only Mayweather.

But where is Maidana now? He is out of business for one year and is rumored to be very overweight. That to me is not a good sign of an elite fighter.

That’s what an elite professional is not about. I believe that Garcia can help Chavez, still I don’t expect miracles to happen.

Until Julio gets to grips with his life and especially his relationship with his father, until he accepts who he is and what he can do best.

Tonight, Chavez Jr. has a good chance to make a small step to progress in his fight against middleweight Marcos Reyes (33-2, 24 KOs) on Premier Boxing Champions on Showtime from the Don Haskins Center in El Paso, Texas. A good win tonight for Chavez Jr. will be just that. But continuity is what makes big champions and time will tell if he is really up for the challenge.

Time reveals us all.