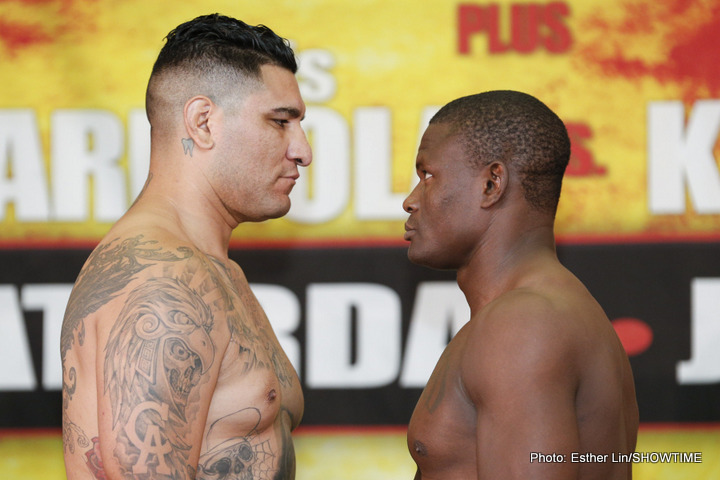 By Dan Ambrose: If there was ever a time where Chris Arreola (36-4, 31 KOs) needs to put in one of his better performances it’s tonight in his 10 round fight against 35-year-old Fred Kassi (18-3, 10 KOs) at the Don Haskins Center in El Paso, Texas.

If the 34-year-old Arreola wins, he could wind up fighting for a world title against WBC heavyweight champion Deontay Wilder on September 26th. Arreola recently came up empty last year in a 6th round stoppage loss to Bermane Stiverne, but against Wilder, Arreola would have a better chance of winning.

Wilder doesn’t appear to have the same punch resistance as Stiverne, and he’s less willing to let his hands go. Arreola could very well capture a world title this year if he can get past Kassi tonight and look good in doing so.

“I got one more run at the title, that’s it. That’s what I told myself. 3rd times a charm and if I don’t get it the 3rd time, I’m gonna quit, I’m gonna retire, man,” Arreola said to Fighthype.com. “I’m in boxing to be a champion.”

Arreola is in top shape at 246 for tonight’s fight against Kassi, so there’s no excuse for him not to look good. In Arreola’s last fight against Curtis Harper, he looked flabby and badly out of shape. Arreola won the fight by an 8 round decision, but it was very close.

The victory for Arreola showed that he’s not good enough to beat even the 2nd tier fighters without going through a hard training camp and coming into his fights in top shape. For Arreola to beat Kassi, he’s going to need to put in some effort because if he lets Kassi hang around, he’s going to make Arreola look really bad.

Arreola could still get the victory, but he’d probably lose out on his chance to get a title shot against Deontay Wilder. He needs a contender that is coming off of an impressive for him to interest the boxing public. If Arreola can’t do that, then Wilder will be better off facing Lucas Browne or Vyacheslav Glazkov.

“I need to make a statement. I’m a front runner for a title shot. When I get a shot I want people to say, ‘yeah, that mother****** deserved it’ not that ‘he was just given it, that title shot’ – so that’s the main thing. I gotta showcase and show up on the day,” Arreola said.

Arreola would do well to try and get Kassi out of there as fast as he can because Kassi has a good engine. He’s going to push the pace against Arreola, and if he’s not in boxing shape, it’s going to be a struggle for him tonight. Kassi is the lighter guy at 225, and that means he’ll likely be the faster of the two and will be able to push a fast pace against the pudgy 246lb Arreola.

“Absolutely, man, why not? Why wait? Title shots don’t come every day, so when they tell you you’re getting a title shot you fu***** take it. You work, you grind, you sacrifice, do what you gotta do and I’m willing to do that,” Arreola said. “I’m out to win that title and this fight (vs Kassi) is just one of those fights that’s in the way.”

If Arreola loses tonight, it’s going to be difficult for him to come back from the defeat. Losing to a guy like Stiverne isn’t something that Arreola needs to be ashamed of, but if he gets beaten by Kassi, then he’s going to need to look in the mirror and decide whether he has what it takes to be a world champion.