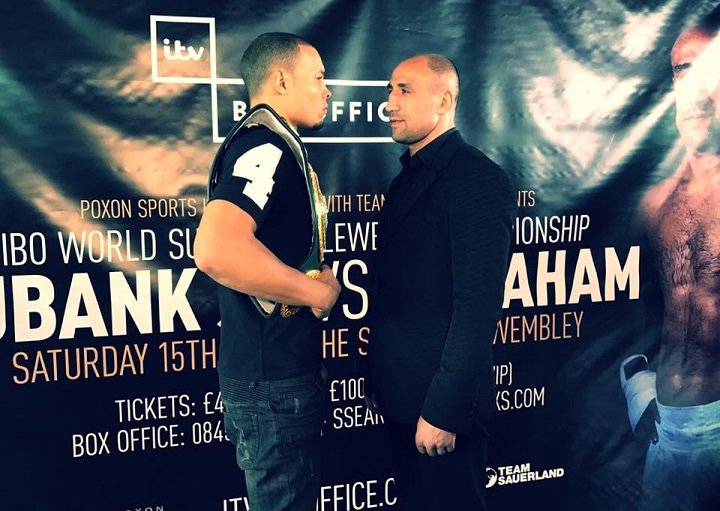 By Scott Gilfoid: Earlier today, the news of the July 15 fight between IBO super middleweight champion Chris Eubank Jr. and Arthur Abraham was officially announced. Eubank Jr. will be defending his International Boxing Federation 168-pound title against former 2 division world champion Abraham at the Wembley Arena in London, England. This is a fight that Abraham can win if he throws enough punches. Abraham is the harder puncher and then more experienced fighter of the two. However, Eubank Jr. has the higher volume fighting style, which will make it tough for Abraham unless he can knock him out.

Eubank Jr-Abraham will be televised on ITV Box Office in the UK. To be honest, don’t think the fight is worth being on PPV. The only fight that I personally think is worth seeing Eubank Jr. fight on PPV is Gennady Golovkin. Fighting Abraham on PPV makes zero sense, because we’re talking about a guy that was recently blanked by Gilberto Ramirez just last year in losing every round of a 12 round fight in losing by a 120-108 x 3.

It’s nice that Eubank Jr. is fighting someone recognizable for a change, as I’d never heard of Eubank Jr’s last 2 opponents Renold Quinlan and Tom Doran. I also had never heard of Tony Jeter until Eubank Jr. fought him in 2015. Abraham might be over-the-hill at this point in his career, but he’s still dangerous because of his power.

‘’Abraham is a strong, come forward fighter, but he’s one-dimensional. He’s very good in that one dimension, but a one-dimensional fighter cannot beat me. I see a lot of holes in his game and I’m going to exploit those holes ruthlessly,” said Eubank Jr.

Despite Abraham pretty much being a shot fighter, he’s HUGE upgrade over the guys that Eubank Jr. has been fighting since his loss to Billy Joe Saunders in 2014. Eubank Jr. has created a lot of noise with wins over 2nd tier fodder opposition for the most part. In the last 2 years, Eubank Jr. has beaten these guys:

– Dmitry Chudinov: Don’t get Chudinov mixed up with brother Fedor Chudinov, who is unquestionably the better of the 2 brothers.

– Tony Jeter A 42-year-old fighter that Eubank Jr. beat in October 2015. Jeter hasn’t fought since then.

– Gary O’Sullivan: This is a guy that was briefly ranked in the top 15 by the World Boxing Association that had done zero to be ranked in the top 15 other than losing to Billy Joe Saunders. This was not a major win for Eubank Jr., because O’Sullivan had done nothing to be rated by the top 10 by the WBA. O’Sullivan had beaten obscure fighters, but had failed when he stepped it up against Saunders. Of course, Eubank Jr. failed against Saunders as well in losing to him in 2014.

– Nick Blackwell: This was an odd choice for Eubank Jr. to take this fight, as he had the option of fighting for a world title against WBA World middleweight champion Danny Jacobs. Eubank Jr. chose the easier path in fighting Blackwell for his British middleweight title. This was a fight that had a lot of British boxing fans shaking their heads, since they figured that Eubank Jr. would fight the higher class world ranked contenders rather than taking his career backwards to fight for a domestic level strap.

– Tom Doran: Eubank Jr. stubbornly decided not to vacate his British title that he’d won off of Blackwell. So instead of vacating the strap, Eubank Jr. opted to defend it against a domestic level fighter. This was clearly an example of Eubank Jr. choosing to underachieve rather than rising to a higher level and challenging himself by taking risky fights against the likes of Gennady Golovkin, David Lemieux and Danny Jacobs. Fighting Doran instead of a good fighter was a bizarre move for Eubank Jr., because he wasting his best years of his career fighting 2nd tier guys.

– Renold Quinlan: This is the fighter that Eubank Jr. decided to face instead of Gennady Golovkin. Eubank Jr. had the option to face Golovkin, but after he dragged his feet in the negotiations, he lost the fight when promoter Eddie Hearn offered the same deal to Kell Brook, who immediately agreed to the fight. Brook ended up gaining a lot of popularity in losing to GGG. Eubank Jr’s win over Quinlan barely got attention from the boxing public.

It’s a decent little scrap between Eubank Jr., who holds a minor title, against an aging 37-year-old Abraham. I wouldn’t call this a great fight. Abraham is not the fight that he used to be. You can argue that Abraham’s career pretty much imploded after he lost 3 out of 4 fights in the Super Six tournament back in 2010 and 2011. That was pretty stunning to see. After that, it’s been mostly careful match-making with Abraham fighting arguably lesser fighters like Robert Stieglitz, Mehdi Boudla, Wilbeforce Shihepo, Paul Smith, Nikola Sjejloca, Pablo Oscar Natlio Farias, Giovanni De Carolis, Robin Krasniqi and Tim Robin Lihaug.

The one good guy that Abraham has faced in the last 6 years was Gilberto “Zurdo” Ramirez, who beat the brakes off Abraham by a one-sided 12 round unanimous decision last year in April 2016. The rest of the fighters Abraham has been feasting on have been less dangerous fighters. Heck, I think George Groves would have beaten everyone Abraham has faced in the last 6 years, and I’m not too high on Groves. Abraham hasn’t improved since the Super Six tournament. The only thing that’s changed since then is the soft match-making that’s being done for him on a consist basis.

Abraham was at his best when he fought at middleweight from 2003 to 2009. Abraham moved up in weight to the 168-pound division in 2010 due to him having problems making the 160 lb. weight limit for the middleweight division. But when Abraham was able to still make 160, he was a fairly decent fighter in holding down the IBF middleweight title from 2006 to 2009. Abraham defended his IBF title 10 times in 3 years. The thing that many boxing fans didn’t like about Abraham’s 3-year reign as the IBF champion is he didn’t fight any of the good fighters like Kelly Pavlik and Jermain Taylor, Winky Wright, Cory Spinks, Kassim Ouma. Abraham didn’t even fight Felix Sturm. Abraham did eventually fight Jermain Taylor, but only after he’d already been knocked out by Pavlik.

NEWS:   'Beefy' Smith on Eubank Jr rematch: "I beat him once, I'll beat him twice"

‘’I will train hard with my coach Ulli Wegner,” said Abraham. ”I will make sure I’m in top shape and ready to secure a great victory. I know Chris Eubank Jr is a good fighter, like his father. I’m expecting a tough fight, but I’m confident I will beat him!’’

Abraham is the bigger puncher than Eubank Jr. by far. The thing that Abraham doesn’t have is a work rate at this point in his career. Abraham doesn’t let his hands go, and this causes him problems.

We saw how Abraham made 2 easy fights harder than they should have been against Paul Smith. We saw the same thing from Abraham in his win over Martin Murray in 2015. Abraham won the fight, but he was so economical with his punches. He made that fight a lot tougher than it would have been had he let his hands go. In Abraham’s loss to Gilberto Ramirez last year, he simply wouldn’t throw punches at all and he subsequently lost the fight by a wide decision. Abraham has major world class punching power, but he doesn’t throw enough punches for him to fully take advantage of his power. 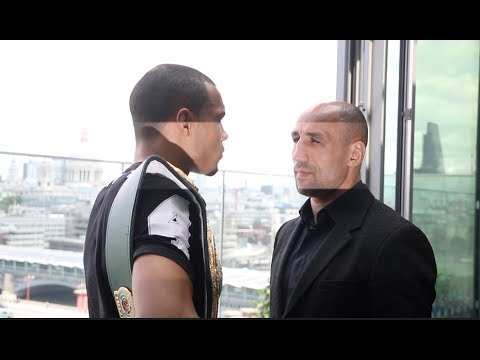