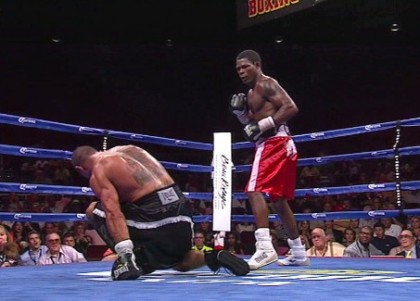 Taylor, 36, knocked Soliman down 4 times in the fight. The knockdowns were largely the result of Soliman injuring his left leg in the 7th round after he appeared to slip on the wet canvas while backing up from one of Taylor’s shots. Soliman’s corner had spilled a great deal of water in the corner area which is what Soliman ended up slipping on in the 7th. Soliman was knocked down once in the 7th, 8th, 9th and 11th rounds.

Overall, Soliman didn’t really do a whole lot other than pose on the outside and rush forward for clinches. He was doing a lot of wrestling and attempting to punch on the break. Soliman was most dangerous when throwing sneaky shots on the break, but other than that he was totally useless.

I gave him only one round in the entire fight, because he was just not able to land enough of his own power shots to win any one round in a clean way. This wasn’t a tired Felix Sturm that Soliman was fighting tonight. Taylor’s stamina held out well, and he was able to get the better of Soliman frequently in landing powerful right hands while on the outside. Taylor didn’t throw a lot of jabs, but when he did he was effective with them.

#9 WBC 168 pound contender Andre Dirrell (23-1, 16 KOs) defeated a game but limited Nick Brinson (16-3-2, 6 KOs) by a 4th round knockout. Dirrell, 31, hurt Brinson with a big left hand in the 4th. Dirrell then flurried on a badly hurt Brinson in the corner until the referee halted the fight. Brinson was trying to weather the storm, but there was no way he was going to be able to survive the round with the way that Dirrell was laying into him with power shots. The fight was stopped at 2:12 of the round.

Dirrell took an unusual approach to the fight in loading up on mostly single shots in looking for a one-punch knockout instead of him jabbing, boxing and throwing combinations like he usually does. Dirrell wanted to get a single punch knockout, and he came close to accomplishing that goal. But in loading up single punches, Dirrell made the fight a lot harder than it should have been, because there were a couple of rounds, namely the 2nd and 3rd, where Dirrell didn’t look that great. Dirrell took some big shots from Brinson in those rounds due to him loading up too much instead of letting his hands go and using his jab.

« Demetrius Andrade to fight on December 6th or 13th, possibly against one of the Charlo brothers