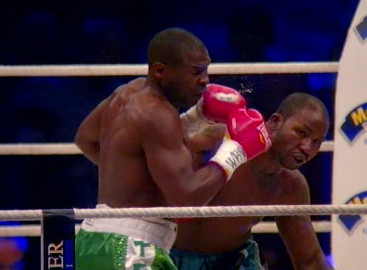 By Allan Fox: #3 IBF Ola Afolabi (21-3-4, 10 KOs) will be challenging International Boxing Federation cruiserweight champion Yoan Pablo Hernandez (29-1, 14 KOs) for his title on December 6th at a still to be determined venue in Germany.

For Afolabi, 34, this will be the 4th time he’s fought for a world title or at least the full world title. He’s come up short three times against WBO cruiserweight champion Marco Huck.

Hernandez is coming off of a tougher than expected 12 round split decision victory over 44-year-old Firat Arslan last August in a fight in which Hernandez took a lot of punishment on the inside. Hernandez decided to try and fight Arslan in close rather than using his height and reach. It made for a very difficult fight for Hernandez, and he was quite fortunate that he was able to pull out the win. This will be Hernandez’s fifth defense of his IBF title.

This could be one of the tougher title defenses for Hernandez if Afolabi has anything left, which is the big question. If this fight had taken place four years ago, Hernandez would have been in trouble, because Afolabi was fighting at a really high level. But with the bout taking place now, Afolabi has slowed down a little and he’s not quite the fighter he was back then.

Afolabi defeated Anthony Caputo Smith by a 3rd round stoppage last June. Last November, Afolabi struggled to defeat Lukasz Janik by a 12 round majority decision. That was a really tough fight for Afolabi, because Janik fought a great fight but he problems with Afolabi’s power.

Hernandez has good skills, but his stamina and his chin are his weak spots. If Afolabi can push a fast pace and look to land big head shots, he could defeat Hernandez. It’s going to be a tough fight, and he’ll deal with a lot of different tricks that Hernandez likes to use.