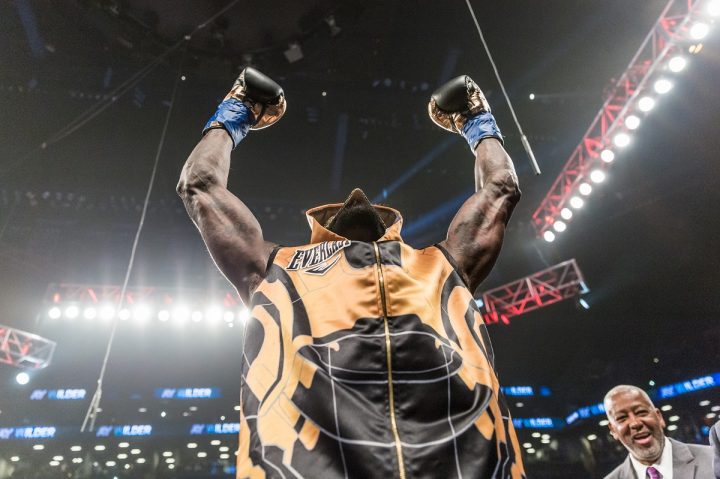 By Jim Dower: WBC heavyweight champion Deontay ‘Bronze Bomber’ Wilder and Luis Ortiz brought in huge ratings for Showtime last Saturday night. Deontay Wilder rallied to stop the 38-year-old Ortiz in the 10th round in a dramatic ending to their fight at the Barclays Center in Brooklyn, New York.

The Wilder-Ortiz fight averaged 1.055 million viewers with a peak of 1.81 million on Showtime. For Showtime, this was best ratings for a boxing event since the Wilder vs. Bermane Stiverne fight in January 2015, which averaged 1.2 million with a peak of 1.3 million, according to Dan Rafael.

Wilder-Ortiz did great ratings despite it having a lot of competition on other networks last Saturday night. At the same time the Wilder vs. Ortiz fight was taking place on Showtime, WBO light heavyweight champion Sergey ‘Krusher’ Kovalev was defending his title on HBO against Igor Mikhalkin, and there was also an NBA game taking place on ABC., as well as a UFC pay-per-view match. Wilder-Ortiz was a fight that had a lot of boxing fans interested.

Whether Wilder can continue to bring in huge ratings for his fights remains to be seen. He’ll need to continue to fight the best each time out if he wants to become popular. Wilder is gaining popularity with the fans in the States, but it’s been frustrating for many of them to watch him defend his belt against bottom fringe level challengers time after time. Wilder needs to take more risks like he did in defending against Ortiz last Saturday.

Wilder-Ortiz didn’t do quite as good as the first Wilder-Stiverne fight, but they were still excellent numbers. The ratings probably aren’t good enough to consider a future fight between Wilder and IBF/WBA heavyweight champion Anthony Joshua as a pay-per-view worthy fight on Showtime in the States. It’ll likely take bigger ratings for Wilder and Joshua’s fights for Showtime to sell their fight on pay-per-view. Joshua is still too much of an unknown with casual boxing fans, and Wilder’s ratings are big enough on a frequent basis to consider a fight between him and Joshua one that is worthy of PPV.

Wilder, 32, needs a big win over the likes of Joshua to take his career to the next level. Wilder has had too many lackluster opponents during his 3-years as the World Boxing Council heavyweight champion. The 6’7″ Wilder needs to be taking on the lions in the division. Wilder has called out Joshua for 2 years with no luck. Joshua’s promoter Eddie Hearn has not shown interest in putting him in risky fights other than the match against 41-year-old Wladimir Klitschko, and he almost lost that fight. Wilder, David Haye and Luis Ortiz have been ignored by Hearn. He’s chosen instead to match Joshua against Carlos Takam, Dominic Breazeale, Eric Molina, Charles Martin, Joseph Parker, Dillian Whyte and Wladimir Klitschko. It appears that Hearn is not quite comfortable at taking risks with his cash cow Joshua.

The co-feature fight on the Wilder vs. Ortiz card between interim IBF super middleweight champion Andre Dirrell and Jose Uzcategui averaged a respectable 673,000 viewers with a peak of 807,000 on Showtime. Dirrell, 34, quit at the start of round 9. It was a disappointing end of the fight for sure.